Will and Guy are building up a good collection of funny buildings and
silly structures.

Stories and Pictures of Funny Buildings 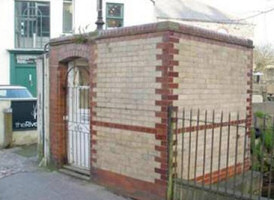 The 125 year leasehold on this 44 square foot property is for sale in Truro,
Cornwall, UK, for the sum of £19,950 [ $ 39,500 USD]. Will and Guy have learned
that the building has one door and a Perspex roof but they cannot confirm that
Dr Who has put in an offer.

The name TARDIS is a registered trademark of the British Broadcasting
Corporation [BBC]. The TARDIS [Time and Relative Dimension(s) in Space] is a
time machine and spacecraft in the British science fiction television programme
Doctor Who.

Finally, we muse, could this be the ultimate dog house?  If you look at
the picture, could it be that the man in the white house in the background gets banished to
the Tardis Dog House?

I'll Go To The Foot of Our Stairs!

Staircases are one of the most important building elements in a house.
They reflect architectural philosophies and in these examples showcase the
talent and ingenuity of their designers.

Look closely at these replacement windows which are to be found, supposedly,
in Russia.

It's Raining Cats and Dogs

Houses had thatched roofs-thick straw-piled high, with no wood underneath. It was the only place for animals to get warm, so all the cats and other small
animals (mice, bugs) lived in the roof. When it rained it became slippery and sometimes the animals would slip and off the roof.  Hence the saying 'It's
raining cats and dogs.'

There was nothing to stop
things from falling into old houses. This posed a real problem in the bedroom where bugs and other droppings could mess up your nice clean bed. Hence, a bed with big posts and a sheet hung over the top
afforded some protection.

The wealthy had slate floors
that would get slippery in the winter when wet, so they spread thresh (straw) on floor to help keep their footing. As the winter wore on, they adding more thresh until when you opened the door it would
all start slipping outside. A piece of wood was placed in the entranceway. 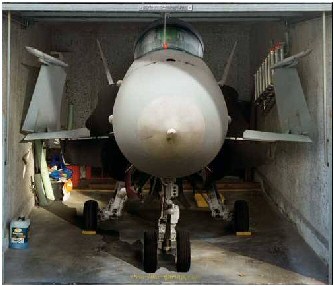 We have discovered that a German firm called "Style Your Garage", creates
posters for garage doors that make it look as if it's actually showing the
interior of your garage, and what's in it.

A taxi driver in Melbourne Australia, was driving a Japanese corporate
executive to a meeting.

Driving into the city from the airport, they passed the newly developed
Docklands estate, with its upgraded parks , waterfront and new stylish
apartments.
"How long this take to build" the executive asked gruffly,
waving his hands at the development.
"Um, " the cabbie replied proudly
" That took over 12 years to build"
"Huh" the passenger derisively
retorted "In Japan, we would build that in 4 years.

Continuing south, the executive noticed the Eureka Tower on the banks
of the Yarra River.
"What is that building please " he asked the taxi
driver.
"Well mate, that's the world famous Eureka Towers, the world's
tallest residential building." the taxi driver replied hesitantly.
"How
long it take to build ?" replied the executive
"Well, around 4 years, I
seem to remember" replied the taxi driver.
"Hah! In Japan, it would
take 2 years" replied the visitor gruffly.

Driving a bit further, they passed the Melbourne casino complex
"What is that building please" he asked the taxi driver.
"Well cobber,
that's the Melbourne Casino, It's the largest casino in the Southern
hemisphere, " the taxi driver replied cautiously.
"How long it take to
build ?" the passenger asked gruffly.
"I think it took 2 years to
build" the cabbie replied.
"Hah! In Japan, we would build it in 1 year"
replied the visitor haughtily.

A bit further on, the Westgate Bridge appeared, its spanning the river
58 metres above and nearly 3 kilometres long.
"What is that bridge
please" the businessman asked the taxi driver.
"Hmmm", the cabbie
replied "I will have to ring tourist information about that - it wasn't
there yesterday!"

Footnote
The last joke was kindly sent in by Ray
Watson.  Please send us your examples of funny
buildings.