Skip to content
Amusing pictures, jokes and funny things about marriage. Men feature, but usually not in a good light.

A Pack of Playing Cards? They say that marriage is like a deck of cards, you start out with two hearts and a diamond, and end up with a club and a spade.

How Did She Do That? 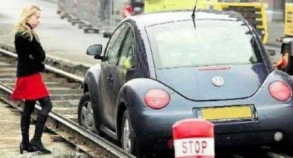 An elderly Italian man lay dying in his bed. While suffering the agonies of impending death, he suddenly smelled the aroma of his favourite Italian anisette sprinkle cookies wafting up the stairs. Gathering his remaining strength, he lifted himself from the bed. Leaning against the wall, he slowly made his way out of the bedroom, and with even greater effort, gripping the railing with both hands he crawled downstairs. With laboured breath, he leaned against the doorframe, gazing into the kitchen. Where if not for death's agony, he would have thought himself already in heaven, for there, spread out upon waxed paper on the kitchen table were literally hundreds of his favourite anisette sprinkled cookies. Was it heaven? Or was it one final act of heroic love from his devoted Italian wife of sixty years, seeing to it that he left this world a happy man? Mustering one great final effort, he threw himself towards the table, landing on his knees in a crumpled posture. His parched lips parted, the wondrous taste of the cookie was already in his mouth, seemingly bringing him back to life. The aged and withered hand trembled on its way to a cookie at the edge of the table, when it was suddenly smacked with a spatula by his wife..... 'Back off!' she said, 'they're for the funeral.'

When asked if there was anything they would have changed about one of the most romantic moments of their lives, several women said a 'bigger diamond!'

The Minister noticed the bride was in distress so asked what was wrong. She replied that she was awfully nervous and afraid she would not remember what to do. The Minister told her that she only needed to remember 3 things. First the aisle, cos that is what you'll be walking down. Secondly, the alter because that is where you will arrive. Finally, remember hymn because that is a type of song we will sing during the service. While the bride was walking in step with the wedding march, family and friends of the groom were horrified to hear her repeating these 3 words... ... Aisle, alter hymn (I'll alter him)

Recommendations Made by Men to Women

"Do you know what it means to come home at night to a man who'll give you a little love, a little affection, a little tenderness?  It means you're in the wrong house, that's what it means".  George Burns

Our overall philosophy on humour is variety, we have a mixture of amusing videos, funny, yet clean jokes, mixed in with thought provoking pictures and the odd story, the theme in this section is 'Funny Women Things'.