Will and Guy are always amazed at the funny, strange and sometimes
downright weird, antics of people. We hope to record their adventures on our
site to entertain and amuse you and perhaps make you laugh. Here is our
latest selection. 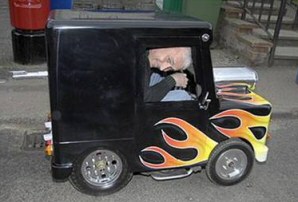 Some Hilarious, Short and Jocular Stories

- True Life Can be As
Funny As Jokes

A desperate bridegroom faces jail, not a reception and honeymoon, as his
reward for staging four bank robberies after his fiancée's plans for a huge
white wedding got out of hand. His "bride to be" demanded a reception with
500 guests, a Chanel wedding gown, a new car for the drive to the service
and a Caribbean honeymoon.

The poor man was unable to provide the money for these jollities so he
stole some £300,000 [$ 4,228,210 USD] in bank robberies throughout Austria
before he was caught when an off duty policeman grabbed him as he fled from
a bank in Vienna.

'The wedding was costing a lot of money and I realised I would never be
able to pay for it,' he told the court. 'The money from the first robbery
went in a day so I just kept going.'

Help Police - Find Me A Husband!

Divorcee, Angela Stahl, aged 44, a desperate housewife, has been reported
for wasting police time in Germany after dialling 999 more than one hundred
times in the hope of finding a new husband. We have learned that she plagued
the emergency line with endless calls claiming she couldn't afford dating
agencies.

Eventually and unsurprisingly two police officers finally
visited her home in Berlin, Germany and confiscated the battery from her
mobile phone.

There is nothing so funny as real life say Will and Guy.

A German mathematician who died 450 years ago has been sent a letter
demanding that he pay for a TV licence. Algebra expert, Adam Ries, who
bought the property in 1525 was sent the bill in Germany.

'We received a letter saying "To Mr Adam Ries" on it, with the request to
pay his television and radio fees,' said Annegret Muench, who now heads a
club honouring the mathematician, which uses the house as its HQ. Miss
Muench returned the letter to the GEZ with a note explaining the request had
come too late, as Ries had died in 1559, but she still received a reminder a
few weeks later.

This was not the first time the GEZ had sent a bill to those in the
afterlife. Last year, a school named after the poet Friedrich Schiller, who
died in 1805, received a reminder asking him to declare all radios and
televisions in his home and pay the corresponding fees.

Will and Guy say, 'Don't you just love these stories?'

Sally Winters wanted to earn some money so she applied for a post in a
Florida lemon grove which seemed eminently suitable but Sally was concerned
that she might be over qualified for the job.

'Look Miss Winters,' said Archie, the foreman, seriously 'have you any
actual experience in picking lemons?' 'Well, as a matter of fact, yes,' came
Sally's reply and she added confidently, 'I've been divorced three times.'

Ranjit was in the express lane at his local Wal-Mart supermarket quietly
fuming. Completely ignoring the sign, the woman ahead of him had slipped into the
check-out line pushing a cart piled high with groceries.

Can you imagine Ranjit's delight when the cashier beckoned the woman to
come forward, looked into the cart, and asked her sweetly which six items
she would like to buy?

Wouldn't it be great, thought Ranjit, Will and Guy, if that happened more
often?

How To Get A Table In A Crowded Restaurant

The Harbour Lights Restaurant, Portsmouth, England, was extremely busy
last Saturday evening and they had no free tables.

My elderly neighbours, Ronnie and Sylvie Hartson, were told there would
be, at least, an 1 ½ hours wait to be seated.

'Young man,' explained Ronnie patiently, looking at Sylvie with a twinkle
in his eye, 'we're both 93 years old and we may not have 45 minutes.'

Police in the Republic of Ireland, the Garda, have been chasing a
mysterious and impossible to find Polish driver who has apparently committed
more than 50 motoring offences.

Officers had been puzzled how the mysterious "Prawo Jazdy" had always
produced his documents, but each time with a different address.

They have now discovered the embarrassing truth. Will and Guy's friend,
Kinga Sadkowska, from Sopot, Poland, has told us that "Prawo Jazdy" is
Polish for "driving licence" and is printed on all Polish licences.

We are delighted to be able to report this hilarious story.

Gary Saunders, a motorist from Liverpool, England, was stopped by a
traffic police officer and reprimanded for laughing at the wheel of his car.
He was using a hands-free 'phone when he burst out laughing at a joke told
him by his brother-in-law.

A few moments later he noticed a traffic officer flashing his lights at
him and gesticulating at him to stop his Renault. When Mr Saunders got out
of his car, the policeman castigated him, 'Laughing while driving a car can
be an offence.'

'I couldn't believe it when he told me I'd been pulled over for
laughing,' Mr Saunders is reported as saying, 'I was driving very safely in
the Birkenhead Tunnel and took a call. He said something funny and I was
laughing; simple as that. I never took my eyes off the road and was in full
control of the car. I definitely wasn't speeding so I asked what the problem
was and he told me I was laughing too much.'

Will and Guy also laughed at this story and we have discovered since that
Mr Saunders has not been prosecuted - just told off.

A Different Slant on Funny Stories and Jokes About People

Simon had fainted. When the paramedics arrived they helped him regain
consciousness and asked if he knew what caused him to faint.

'It was enough to make anybody faint,' he spluttered. 'My son, Rod, asked
me for the keys to the garage, and instead of driving the car out, he came
out with the lawn mower.'

A Good Read?
'Andy, for heaven's sake, why can't you
just talk to me once in awhile?' whines his wife, Sonia.
'Huh?' Andy
responds.

'Look around you,' Sonia yells as she points around the room. 'All these
books. Your head is always buried in books. You don't even know I'm alive!'

'Oh. I'm sorry,' mutters Andy.
'You know, sometimes I wish I were a
book. Then you'd at least look at me,' explodes Sonia.
'Hmmm,' Andy
mumbles deep in thought, ' then at least I could take you to the library
every few days and change you for something more interesting.'

Seeing the Light
Sara to husband, Norman,
'Let's go out and have some fun tonight.'

'Okay,' says Norman quietly, ' but if you get home before I do, leave the
hallway light on.' 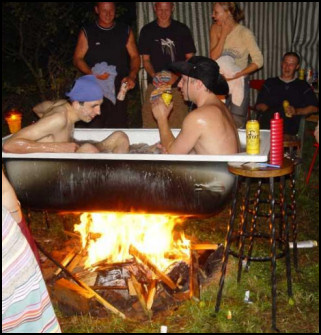 I. Brenda rushes into the supermarket to pick up a few items. She heads
for the express checkout where the cashier is busy talking on the phone with
his back turned to her.
'Excuse me,' Brenda gasps, 'I'm in a hurry.
Could you check me out, please?'
The cashier turns looks her up and down
for a second, smiles and remarks,' Phwoar, not bad!'

II. Hotel Guest: 'Can you give me a room and a bath, please?'
Receptionist: 'I can give you a room, but you'll have to take your own
bath.'

III. Philip is passing a country estate and sees a sign on the gate. It
reads: "Please ring bell for the caretaker."

He rings the bell and an old man appears.
'Are you the
caretaker?'Philip asks.
'Yes, I am,' replies the old man. 'What do you
want?'
'I'd just like to know why you can't ring the bell yourself.'

IV. A policeman walked over to a parked car and asked the driver if the
car was licensed. 'Of course it is,' replied the driver. 'Great, I'll have a
pint then.' said the policeman.

Ten Very Funny Tales of Weird People: You Couldn't Make It Up!

A priest goes into a barber's shop sits down, gets a good haircut, thanks the barber, and asks how much he owes him.

The barber says, 'Father, you're a holy man, a man of the cloth there is no charge
you.'

The priest blesses the barber and says, 'Thank you very much' and goes about his business. The next day, 10 gold coins magically appear on the barber's doorstep.

A few days later, a Buddhist monk goes in for a
shave and a shine, and when the time comes to pay the barber says, 'No money, please, you're a spiritual leader, a man of the people, it's on the house.'

The next day, magically appearing on the doorstep
are 10 magnificent rubies.

The following week a rabbi comes in, gets a haircut, goes to pay and the barber says, 'No, Rabbi, you are a learned man, a wise man, I can't take any money from you, go in
peace.'

Then the next day, the barber opens his shop to find 10 Rabbis waiting for a haircut.

Last week, Sandra, a distraught wife went to the local police station in
Boston, Lincolnshire, England, along with her next-door neighbour, Jenni, to report
that her husband was missing.

The police officer asked for a description of
the missing man.

Sandra described him clearly and in detail, 'He is 35
years old, 6ft 3 inches, has dark eyes, dark wavy hair, an athletic build,
weighs 180 pounds, is softly-spoken and is fabulous with the children.

Jenni interrupts her protesting, 'Why Sandra, your husband is 5 ft 7
inches, corpulent, bald, has a big mouth, and is horrid to your children.

Sandra replied, with a sigh, 'Yes, but who wants HIM back?'

No section on funny people jokes would be complete without a comedian.
Here are some of our favourite Peter Kay witticisms:

*Peter Kay is an actor, comedian and writer from Bolton, Lancashire,
England, where he is greatly liked and respected. He is known to be a keen
observer of northern life in England.

Will and Guy have a whole section on
our favourite comedians