Skip to content
Every nation ridicules other nations, and all are right.  Arthur Schopenhauer

International Jokes: Topics on This Page

Here is Will and Guy's collection of international jokes and funny pictures.  All the jokes are clean, and to our old-fashioned way of thinking, are in good taste.  It will be a sad day if national identities are lost due to political correctness.  There are signs that common sense is prevailing.  If we have a bias then it's for old friendly rivalries such as English v Scottish,  American v Canadian, some of the current conflicts seem too intense and painful for us to include jokes about their hostilities.

Joke About An Englishman, Irishman and a Scotsman

An Englishman, an Irishman and a Scotsman were out fishing in a boat on a lake together and doing very well. 'This is a terrific spot for fishing,' said the Englishman. 'How will we know where this spot is next time?' 'I've thought of that,' said The Scotsman, 'I've just put a mark on the side of the boat.' 'You idiot,' said the Irishman, 'how do you know we will get this boat the next time?' See more Englishman, Irishman... Jokes

You can take a New Yorker out of the Bronx, but you cannot take the Bronx....

'A guy phones the local hospital and yells, 'You've gotta send help! My wife's in labour!' The nurse says, 'Calm down. Is this her first child?' He replies, 'No! This is her husband!' See more funny jokes from around the world

How to Speak Chinese 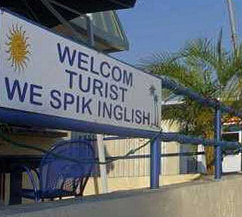 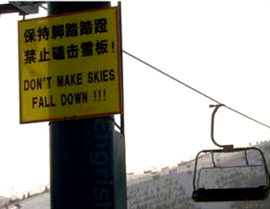 Five Funny Jokes From Other Lands

One foggy night, a United States Aircraft Carrier was cruising off the coast of Newfoundland and the junior radar operator spotted a light in the gloom.  Here is a transcript of what happened next. The radar operator worked out that a collision was likely unless the other vessel changed its course.  So he sent a radio message. U.S. Aircraft Carrier Radar Officer: 'Please divert your course at least 7 degrees to the south to avoid a collision'. Back came the reply: 'You must be joking, I recommend you divert your course instead'. The U.S. Radar Officer referred the matter to his superior officer.  And reported the incident as insubordination. As a result the Captain of the Air Craft Carrier sent a second message. 'I believe that I out rank you, and am giving you a direct order to divert your course now!!!'

Canadian Radio Operator: 'This is a lighthouse.  I suggest you take evasive action.' Footnote to the lighthouse urban myth The lighthouse story is an urban myth.  Our friend Jackson heard a rumour that the story is discussed at the annual coastguards convention, where the different versions are compared and scored.  Apparently most versions are preposterous because the ship would have visual contact with the lighthouse.  However, if you add a fog to your version you gain credibility - at least in the eyes of the lighthouse keepers. Footnote: Please send us your funny international jokes