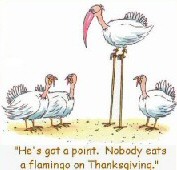 A lady was picking through the frozen turkeys at the grocery store, but couldn't
find one big enough for her family. She asked the stock boy, 'Do these turkeys get any bigger?'

The stock boy answered, 'No ma'am, they're dead.'

Big Turkeys and Little Turkeys
If a big turkey is called a gobbler, what do you call a little turkey.  A goblet.

Young Simon was sitting in his grandmother's kitchen, watching her prepare the Thanksgiving meal.

'What are you doing?' Simon enquired.

'Wow, that's cool.' Simon remarked. 'Are you going to hang it next to the deer?'

The Secret of Stuffing a Turkey
How many cooks does it take to stuff a turkey?  Only one, but you REALLY have to squeeze to get him in.

Grave Humor
What did the hen tell the naughty chicks?  If you your father could see you now he would turn in his gravy.

The Man Who Forgot to Buy a Turkey for Thanksgiving

It's the day before Thanksgiving, and the butcher is just locking up when a man begins pounding on the front door.

'Please let me in, 'says the man desperately. 'I forgot to buy a turkey, and my wife will kill me if I don't come home with one.'

'Okay, 'says the butcher.'
Let me see what I have left.'
He goes into the freezer and discovers that there's one last scrawny turkey left. He brings it out to show the man.

'That's one is too skinny. What else you got?' says the man.

The butcher takes the bird back into the freezer and waits a few minutes and brings the same turkey back out to the man.

'Oh, no, 'says the man, 'That one doesn't look any better. You better give me both of them!'

See more of our Thanksgiving Turkeys

The Turkey, the Parrot and the In-laws  Kindly sent in by Cody

Martha had a parrot called Brutus, the only problem was that Brutus cussed something awful.  Now Martha was having her in-laws over for
Thanksgiving, and so she needed to train Brutus quickly not to swear.

Just before her Mother-in-law was due Brutus cussed terribly, so Martha but him in the freezer for 2 minutes to literally cool off.  Then she opened the door and took out the parrot along with the turkey.

'And have you learned your lesson about cussing?' Martha asked the parrot.

Brutus the parrot took one look at the dead turkey and said: 'I sure have.  But I have one I have a question, "What did the turkey do?" '

Gratitude
In the week before Thanksgiving Mary-Jo asked her class of 9 year-olds to write a paragraph entitled:
'What I am most thankful for on Thanksgiving Day'.

All Joey could write was:  'I am thankful that I'm not a turkey at Thanksgiving.'

Crossing I
Mary-Jo (Teacher): Why did the turkey
cross the road?
Joey: It was the chicken's day off.

Crossing II
Mary-Jo: 'Why do you think that the
Pilgrims sail from England to America?'
Joey: 'Because they missed their plane.'

Crossing III
Mary-Jo: 'What did the farmer get when
he crossed a centipede with a turkey?'
Joey: '100 drumsticks.'

Grandma was showing the children a painting of the Pilgrim Family on a
Thanksgiving Day card that they had received and she commented, 'The Pilgrim
children enjoyed going to church with their mothers and fathers and praying to
God.'

Her youngest grandson looked at her doubtfully and asked, 'Then why
is their Dad carrying that rifle?'

Eddie in Dallas calls his son in New York just before Thanksgiving and
tells him, 'I am sorry to tell you but your mother and I are going to
divorcing.  I just cannot take any more of her moaning.  We can't
stand the sight of each other any more.'  I am telling first, Eddie,
because you are the eldest, please tell your sister.

When Eddie calls his sister Julie, she says: 'No way are they getting
divorced, I will go over and see them for Thanksgiving.'

Julie phones here parents and tells them both 'You must NOT get divorced.
Promise you won't do anything until I get over there.  I'm calling
Eddie, and we'll both be there with you tomorrow.  Until then, don't
take any action, please listen to me', and hangs up.

The father puts down the phone and turns to his wife and says. 'Good
news' he says, 'Eddie and Julie are coming for Thanksgiving and they are
both paying their own way.'

Indians and the Pilgrims

Nathan, a young boy, after hearing the story of Thanksgiving and how the Indians and the Pilgrims sat down together, climbed up into his father's lap and said, 'Daddy, did you know that if we were Indians,
you would be a brave and Mom would be a squawk?'

'That is the best description of your mother I have ever heard, Nathan', replied his daddy as he ducked.

Sunny days
ahead
April showers bring May flowers.  And the May
flower brings ....... Pilgrims!

Buckle down?
Why did the pilgrim's pants fall
down?
Because he had his buckle in his hat.