Think of this page as a sitemap for our free, clean, yet funny Halloween jokes and pictures.  Eat, drink and be scary.

What do ghosts serve for dessert?
Ice scream

What do you call serious rocks?
Grave stones.

What do you call pretend rocks?
Shamrocks.

When witches go riding,
and black cats are seen,
the
moon laughs and whispers,
'tis near Halloween.

There is trend for greater sophistication in Halloween costumes.  In
our youth all we used were old sheets to frighten our enemies and friends,
these day's you can buy or hire all manner of

A boy meets a giant pumpkin in Hong Kong.
Although Halloween
has little meaning to most people on the island the event is
seized upon as a marketing opportunity.  See more pumpkin jokes and stories

Because of a guest, we have a confirmed ghost story. My
husband and I both experienced the same "feeling" and vision while outside working the orchard and blueberries -- the funny part is I didn't tell him about it when it happened (mine happened first and I didn't
tell him, then his occurred some months later and he came in and told me).

My husband came in one day (about a month or so after I had my experience) and told me of his experience. Same man, same "watchful"
feeling. We both "saw" this figure in our side vision -- a man watching us as we worked.

It also was a "feeling" of this voice telling us where to prune, how to do the job we were doing.

A "guiding
spirit," we call him.

We found out later that it was Old Man Simon. How did we find out? We described this man to a guest (a relative of the Brewsters, who owned the property before us) that brought
pictures of Simon. She showed us the picture only after we described him. It was one of the original owners of this 260-year-old home!

Hell Freezes over at Halloween

John and Sue Wilson are in heaven despite the fact that they live in Hell, a town 45 miles west of Detroit. In the Michigan Lottery they won the big prize in the Fantasy 5 drawing held on Halloween 2007.

'How cool is that?' said Sue Wilson, 43, a teacher's aide. Her husband is an electrician. The couple said they plan to use their winnings to pay off bills, make some home improvements, buy a video game system
for their 13-year-old son and possibly visit relatives in Georgia.

The Origin of Halloween

Halloween is also known as Samhain, Pinkie Night, Soul Cakers, Love Divination, or most aptly - Mischief Night.  Halloween and its associated customs, have evolved from
ancient Celtic celebrations, which honour the dead.  The Halloween festival is also intertwined with end of harvest celebrations, and in some cultures, All Saints religious elements.
See more about the history of Halloween.

What do you call a witch's garage?
A broom closet.

What music do ghosts like the best?
Haunting melodies. 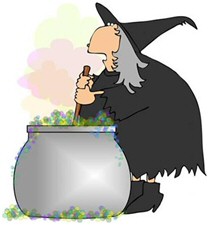