All we need is Leonard Cohen's sound track - 'Like a bird on the wire'.

Oh like a
bird on the wire,
Like a drunk in a midnight choir I have tried in my way to be free.

Big Bird on the
Wire

Classic Shot of Frightened Birds on a Wire

Can
'Big Bird' be Friends with the Little Birds?

Funny Birds on a Wire Video

See what happens when the big bird settles on the telegraph wire. All will be revealed in the video below.

'Like a bird on the wire'. By Leonard Cohen  (Also recorded by Johnny
Cash)

Like a bird on the wire,
Like a drunk in a midnight choir
I have tried in my way to be free.
Like a worm on a hook,
Like a knight from some old fashioned
book
I have saved all my ribbons for thee.
If I, if I have been unkind,
I hope that you can just let it go by.
If
I, if I have been untrue
I hope you know it was never to you.

Like a baby,
stillborn,
Like a beast with his horn
I have torn everyone who reached out for me.
But I swear by this song
And by all that I have done wrong
I will make it all up to thee.
I saw a beggar
leaning on his wooden crutch,
He said to me, you must not ask for so much.
And a pretty woman leaning in her darkened door,
She cried to me, hey, why not ask for more?

Oh like a bird on the wire,
Like a drunk in a midnight choir have tried in my way to be free.

Swallows Perching on a Branch

This photograph shows 24 swallows huddling together to survive harsh winter
weather. The two dozen birds clamoured together on a single branch to
conserve heat.

Photographer Keith Williams, 59, spotted the scene while out walking his
dog on a trail beside the Yukon River in Canada.

Birds
On a
Wire - Odd One Out

Just a picture that appealed to Will and Guy, and made us think about why
that bird is facing the other way?

Birds on a Wire Legends and Superstitions

More Birds on a Wire 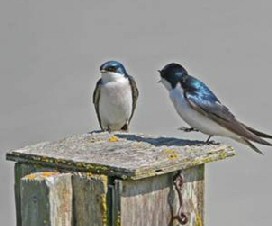 So one bird said to the other: Dicky went into a pet shop and said,
'Have you got any birds?'

The shop keeper smiled and replied, 'Yes, we have three birds, a
square bird, a circle bird and a triangle bird.'
'I think I'll take
the square bird,' Dicky chirped.

'OK, here's your bird but keep it away from other shapes.'

So Dicky took the bird to his square home in his square car. He
bought the bird a square cage and put it in a square room with square
objects in it. Soon the bird learned to talk so Dicky threw a party for
the bird.

When everyone was quiet the bird gave a small talk and then Dicky led
everyone in a round of applause and the bird died!

Who's a Pretty Boy?

Here is an interesting puzzle - Birds on a Wire