Meet the most vocal member of St Mary's Church: a tame robin who has made
this Portchester church his home. 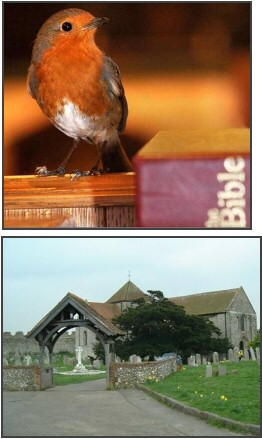 It might not be the largest member of the flock, but this bold robin can
easily out-sing all the other churchgoers.  The bird has become a fixture at
12th-century St Mary's in Portchester Castle, Hampshire after fluttering in
during the worst snow of the winter.

Interestingly, the village of Portchester, on the south coast of England,
is where Will comes from and he and his family still live there.  As a child
he often worshipped in 12th century church with his family.

Reverend Charlie Allen, 31, is delighted with her new red-breasted friend
whose vocal contributions to sermons and hymns are easily audible shown here
in this photo.

The vicar first spotted the bird inside St Mary's Church at Portchester
Castle, Hampshire, when there was a heavy snowfall in December 2010.   Since then the chirpy chappy has made the 12th Century Anglican church
overlooking Portsmouth Harbour its home and has received considerable
attention from the other parishioners.

Not only does the friendly male bird enjoy seeds and water left out for
it by the vicar, but he is even treated to crumbs of cake by people who are
visiting specifically to take its picture.   We learned that, "He eats
out of people's hands and visitors to the church are delighted.  He
moved in when we had a cold snap. He will occasionally fly outside but if he
comes back to find the door closed, he'll wait by it to be let back in
again."  What a magical 'bird of pray'!

A robin which sought shelter in a shop during the snowy weather has
become a daily fixture. The bird which, Will and Guy have discovered, has
been named Robbie seeks morning crumbs and warmth in an Aberdeen
Co-operative Store.

The robin first appeared in November amid the heavy snow and can be seen
sitting behind the tills each morning, often singing.  Bits of croissant,
Aberdeen rowies, [also known as butteries or breakfast rolls] and
blueberries have become the bird's favourites.

However, staff had to remove a Christmas card featuring a robin which was
behind the counter as their *territorial visitor kept flying at it. 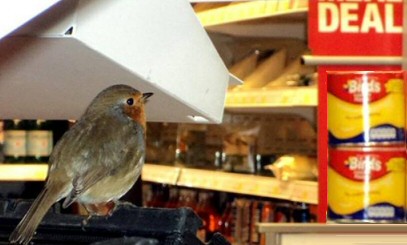 Co-op assistant Yvonne Benzie told us, 'He cheers us all up. We will miss
Robbie when he goes.'

*Probably the UK's favourite bird, with its bright red breast it is
familiar throughout the year and especially at Christmas. Males and females
look identical, and young birds have no red breast and are spotted with
golden brown.

Robins sing nearly all year round and despite their cute appearance, they
are aggressively territorial and are quick to drive away intruders.

They will sing at night next to street lights.

It always makes me melancholy when the robins start migrating south.

'A robin redbreast in a cage
Puts all heaven in a rage.'

From the poem "Auguries of Innocence"

Thought for the Day - Miscellany

Footnote:
Please send us your interesting information
about Portchester, or about robin: bird of pray!