Don't you just hate it when someone looks over your shoulder when you are reading?

Flamingo Joke
Q: Why is that flamingo standing on one
leg?
A: Because if he lifts it up he'd fall down!

Flamingos usually lay just one large egg.  It takes about a month
for the chick to incubate.  The chick's mother and father each take
turns to incubate the egg.  Just before they hatch the chick starts
squawking, this is the signal for the parents to help by breaking the egg
from the outside.

After about a week of feeding from its parents, the flamingo chick looks
funny, but it's ready to walk - see funny flamingo picture below.  The young flamingo develops quickly and
can swim before it leaves the nest, which is typically about a week after
hatching.

See more
on the flamingo

Alice in Wonderland with Her Funny Flamingo
Croquet Mallet

'Can you play croquet' the Queen of Hearts asked Alice

It seems that the plural of flamingo, is usually spelt as flamingos, however, flamingoes is also deemed to be correct.  Incidentally, the brooch is another tricky word to spell.  This is because the
noun brooch (above) is frequently confused with the verb to broach (a subject). 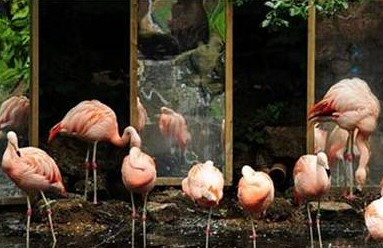 Flamingos pictured at Colchester Zoo, Essex, England, have been given the chance
to preen after a number of full length mirrors were placed in their
enclosure. The move isn't to allow the birds to admire their reflection but
is part of an attempt to encourage them to breed!  Flamingo photo:
Jeremy Durkin/Rex.

Pink
Flamingos In The Snow

Pink flamingos in the snow,
newly planted in drifts
as high as their fat plastic bellies,
their gaudy long necks
stretched to watch the passing traffic.
I drive along my usual route
in glassy ice-formed ruts,
thinking bad thoughts about winter
and brooding darkly
about the endless wet and cold.
Then four flamingos catch my eye,
laughing at
their own frigid landscape
and feigning warmth of other climes.
I smile and thank the thoughtful wag
who placed them there
for offering hope
and pointing us toward spring. 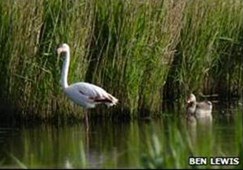 An escaped flamingo which has been flying free for nearly five months has
turned up at nature reserves in Norfolk and Suffolk in England.

The female bird, named Fiona, landed at the RSPB reserve at Strumpshaw
Fen, near Norwich, on Wednesday morning.  The escapee from a zoo in
Hampshire then turned up at RSPB Minsmere on the Suffolk coast on Thursday
morning.

She has also been spotted in Cambridgeshire, Bedfordshire and Berkshire
in recent weeks. Fiona visited RSPB Titchwell Marsh, near Hunstanton, early
in April 2011 and has also been spotted at its Ouse Washes reserve in
Cambridgeshire.  Ben Lewis, whose photo is below, a warden at
Strumpshaw Fen, said he initially thought the sighting of Fiona at the
reserve was a joke. 'But when I rushed over to our tower hide it was there
in full view, mingling with the geese, paddling in the water and flying over
the reed beds,' he said.

A numbered ring on the flamingo's leg identified her as Fiona - a greater
flamingo, a species native to parts of Africa, southern Asia and southern
Europe.  She escaped from Marwell Wildlife, near Winchester, Hampshire,
England in 2010.

Wouldn't you just love to fly with flamingos?