What is it about parrots that makes them so funny?  Probably it's
their ability to mimic that makes the parrot a constant source of jokes and funny stories.

Thief and the Parrot Story

Late one night, a burglar
broke into a house that he thought was empty.  He stealthily crept through the lounge and was stopped dead in his tracks when he heard a loud voice clearly saying, 'Jesus is watching you!'

Silence returned to the
house, so the burglar crept forward again.
'Jesus is watching you', the voice rang out again.

The thief stopped dead again. He was frightened out of his wits. Frantically, he looked all around. In a dark
corner, he spotted a birdcage and in the cage was a parrot.

He asked the parrot, 'Was that you who said Jesus is watching me?'

The burglar breathed a heavy sigh of relief and
asked the parrot: 'What's
your name?'

'That's
a stupid name for a parrot, 'sneered the burglar. 'What idiot named you Moses?'

The parrot said, 'The same idiot who named the
Rottweiler Jesus.'

[Thanks to Vanessa for correcting this parrot joke]

Border guards in Belarus are hunting a man who tried to smuggle almost three
hundred parrots into the country on the back of a bicycle.  The guards saw the
man while out on a routine patrol along the border with the Ukraine.  When they
called him to stop he jumped off the bike and fled into nearby forests so the
guards searched his boxes.

To their great surprise they found the birds crammed into six boxes strapped
to the back of the bike.  Two of the birds died but the rest were checked by vets
who gave them a clean bill of health and passed them on to an animal sanctuary. 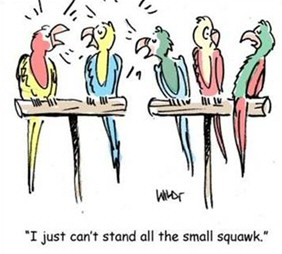 One day David went to an auction. While he was there, he bid for a parrot. David really wanted this bird, so he got caught up and thoroughly involved in the bidding. He kept on bidding, but kept getting
outbid, so he bid higher and higher and higher.

As he was paying for the parrot, he said to
the auctioneer, 'I hope this parrot can talk. I would hate to have paid this much for it, only to find out that he can't
talk!'

'Don't
worry.'
said the auctioneer, 'He can talk. Who do you think kept
bidding against you?'

Footnote
I once fell into conversation with an auctioneer.  After
a few beers, the auctioneer confessed that sometimes he took
phantom bids 'against the wall'
in order to hype up the price.

A noisy parrot that enjoys imitating sounds has helped save a man and his son
from a house fire by sounding like a smoke alarm, the bird's owner reports.
Shannon Conwell, 33, said he and his 9 year-old son fell asleep on the sofa
while watching a film. They awoke at about 3 o'clock in the morning to find
their home on fire after hearing the family's Amazon parrot, Peanut, imitating a
fire alarm.

'He was really screaming his head off,' Conwell said. The smoke alarm had
activated, but it was the bird's call that caught Conwell's attention. 'I
grabbed my son and my bird, and got out of the house,' he said. The fire
destroyed the home's dining room, kitchen and bedroom, Muncie, Indiana, USA,
fire officials said. Aside from Peanut, Conwell said the fact that he and his
son fell asleep on the couch helped save them. They may not have heard the alarm
or the bird if they were asleep in their bedrooms.

Police called out to investigate reports of a young child left home alone found a talking parrot instead. Police were called to the house in Koblenz, Germany, by an elderly lady who said she could hear a child
next door constantly screaming, 'Mama, Mama'
. The woman felt the child must have been left home alone as nobody was answering the cries. When officers broke into the house they found the cries were coming from
a 25-year-old talking parrot.

What a palaver can result when you find that your two newly bought
parrots make a great deal more noise than you wanted or expected. Often we
read about loud mouthed parrots irritating their neighbours because they are
able to learn to talk and particularly, to swear. However, a slightly
different issue arose when Mr Jiang bought his two birds. They drove his
Mynah bird quite mad with their incessant chatter.

The problem befell Mr Jiang, of Nanjing, China, who purchased the birds
in good faith and took them home to live in the same room as his pet Mynah
bird. The Mynah had been taught by Mr Jiang to speak Chinese in order to
attract more business Will and Guy have learned from the Yangtze Evening
Post.

The talkative parrots annoyed the Mynah bird so much with their prattling
that he became very upset, angry and frenetic. Then the mynah noticed that
when a neighbouring cat came to visit and miaowed, the parrots suddenly were
very quiet, Mr Jiang explained to us.

The Mynah then listened carefully and amazingly began to mimic the cat's
sound and now has managed, on several occasions, to shut the noisy parrots
up by loudly miaowing.

Brilliant, say Will and Guy; you just couldn't make it up.

*Mynah bird can be spelled with or without an h: both spellings are
correct: Myna and Mynah.

Cat with Parrot - or Parrot with Cat

Parrots, like humans, show preference to use one side of their body more
than the other, with more of them left handed, or left footed, Will and Guy
have recently read.

Australian researchers found that virtually all the parrots they studied
prefer to use either their left eye and left foot, or right eye and right
foot. The study, published in "Biological Letters", examined roughly 320
parrots from 16 different Australian species. Ultimately, they found that
roughly 47% were left handed, 33% right handed, and the remainder
ambidextrous.

In addition, in some cases young birds appeared to experiment with both
sides before finally settling on one.

The idea of "handedness" in humans, adds Guy, is tied to the use of one
hemisphere of the brain over another, known as 'lateralisation.'

The Funny Story of George and the Parrot 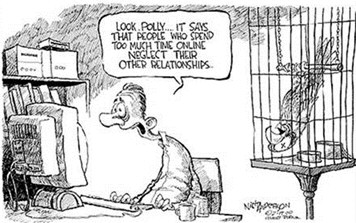 Chippenham George, the postman, is working on a new postal round in
Fareham. He comes to a garden gate in Acacia Avenue marked "Beware of the
Parrot".

George looks down the garden and, sure enough, there's a parrot sitting
on its perch. He has a little chuckle to himself at the sign and the parrot
there on its perch.

The mailman opens the gate and walks into the garden.

George reaches the parrot's perch, when suddenly, it calls out loudly,
'Rover, attack.'

Footnote:
Please write to Will and Guy if you have any funny parrot stories.