What's the difference between a stork and lawyer?
A stork knows how to control his bill.

Soon Their Friend's Take Up Residence Too

Will and Guy ponder: 'What started the myth that the stork brought babies to
their parents?'   We can imagine an old midwife being called out for an
urgent confinement.  As she hurries along she notices a White Stork flying
in the direction that she was heading.  When she entered the mother's
bedroom the baby had already arrived, she thought
whimsically, it was that stork who delivered this baby.

Vets who saved a female stork, shot by hunters in Croatia, thought her
days were numbered but did not take into account the devotion of her mate,
Will and Guy can report. The vets knew the female, which they called Malena,
would never fly again but put her back on her nest thinking she would not
survive the winter. When her partner, named Rodan, flew south with their
young they expected that she would eventually die and certainly never mate
again. 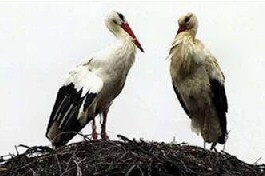 Their predictions were proved wrong after the Vokic family, where she had
a nest, helped to feed her through the long winter months and she survived.
Perhaps, even more amazingly, Rodan has returned every year to mate with his
partner and rear another clutch of chicks.

Rodan flies 13,000 kilometres to South Africa, each year, to spend winter
in the warm and then the same distance back again to be back with his
injured love. A local told Will and Guy, 'She was shot in 1993 by Italians -
but she didn't die and was handed over to our vet. He saved her life but was
crippled and had lost her ability to fly. The damage was too severe. Her
lover is amazing; this year when he arrived from South Africa, where he
spent the winter, despite the fact that he had travelled 13,000 kilometres
he immediately made love to Malena. It was clear they were pleased to see
each other. As she can't fly Rodan teaches the little ones to fly and
accompanies them to the south every season.' 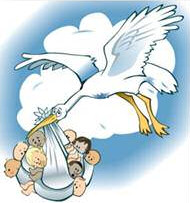 Here is an amusing poem written by Shel Silverstein about a stork:

You know the stork brings babies,
But did you also know
He comes and gets the older folks
When it's their time to go?

Zooms right down and scoops them up,
Then flaps back out the door
And flies them to the factory where
They all were made before.

And there their skin is tightened up,
Their muscles all are toned,
Their wrinkles all are ironed out,
They're given brand-new bones.

Ol' bent backs are straightened up,
New teeth are added too,
Tired hearts are all repaired
And made to work like new.

Their memories are all removed
And they're shrunk down, and then
The stork flies them back down to earth
As newborn babes again.

Enjoy one of Aesop's Fables

At one time the Fox and the Stork were on visiting terms and seemed very good
friends. So the Fox invited the Stork to dinner, and for a joke put nothing
before her but some soup in a very shallow dish. This the Fox could easily lap
up, but the Stork could only wet the end of her long bill in it, and left the
meal as hungry as when she began.

'I am sorry,' said the Fox, 'The soup is not to your liking.'
'Pray do not apologise,' said the Stork. 'I hope you will return this visit, and
come and dine with me soon.'

So a day was appointed when the Fox should visit the Stork; but when they
were seated at table all that was for their dinner was contained in a very
long-necked jar with a narrow mouth, in which the Fox could not insert his
snout, so all he could manage to do was to lick the outside of the jar.

'I will not apologise for the dinner,' said the Stork, 'One bad turn deserves
another.'