Owls are special, here is our tribute to this wonderful, wise bird.

What did the owl say to the other owl?
Whooo are yoou? 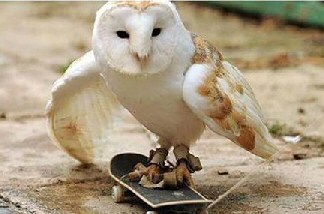 Not to be outdone by the dog, Alby, a barn owl, also rides his
skateboard. Alby has become a hit at his local shopping centre Will and Guy
are able to report.

Alby's unusual talent was discovered during a trip to the shopping centre
in Folkestone, Kent, England. When the board comes to a stop, Alby takes off
and flies in a small circle before re-landing on the board and pushing it
along again.

Here is Another Intrepid
Animal Skateboarder

Allegedly a True Owl Story
Told to Will by Christine Green 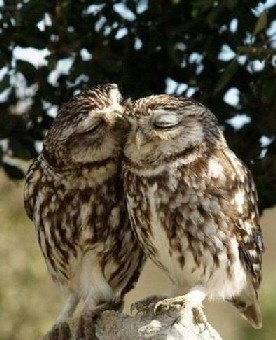 Each evening bird lover Tom Rowe stood in his backyard in Devon, England,
hooting like an owl - and one night, an owl called back to him.

For a year, the man and his feathered friend hooted back and forth.  Rowe even
kept a log of the 'conversation.' Just as Rowe thought he was on the verge of a
breakthrough in inter-species communication, his wife had a chat with next door
neighbour, Nancy Hollis.

'My husband spends his nights ... calling out to owls,' laughed Mrs. Rowe.

Then it dawned on them!

The Owl and the Pussycat

An interesting video telling a remarkable story of animal friendship.

The Owl and the Pussycat Poem by Edward Lear

"Dear Pig, are you willing to sell for one shilling your ring?"
Said the
Piggy, "I will"
So they took it away, and were married next day
By the
Turkey who lives on the hill.
They dined on mince, and slices of quince,
Which they ate with a runcible spoon.
And hand in hand, on the edge of
the sand.
They danced by the light of the moon,
The moon,

The moon,
They danced by the light of the moon.

Treacle the owl goes for a bike ride Apparently hand reared owls can think
that they are, in fact, human. Treacle, a six year old tawny owl brought up by
his keeper, Jenny Smith in Eccleshall, Staffordshire, UK, is one such bird.
Jenny has let Will and Guy know that because he is a rather lazy and laid back
owl she allowed him to ride on the handlebars of her bike.

M/S Smith commented, 'I think Treacle likes being on the bike because owls
are notoriously lazy. So this way he doesn't have to do any exercise and he can
sit around and look at his surrounding area to see what's going on. We do fly
him and he does enjoy flying but I suppose the bike feels like he's flying but
without putting in the effort.'

We have discovered that the Gentleshaw Wildlife Centre, where Treacle lives,
also has a monkey that likes scribbling and a hawk that only likes women. 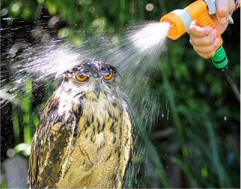 Following the extremely hot weather experienced in southern England here
is Billy, a 16-year-old Eagle Owl, based in Hampshire, being sprayed with
water from a hose to keep cool.

The funny owl picture to the right shows Billy's expression at being
sprayed.

Owls are an order of birds of prey.  Most are solitary, and nocturnal.
Owls mostly hunt small mammals, insects, and other birds, though a few species
specialize in hunting fish. They are found in all regions of the Earth except
Antarctica, most of Greenland, and some remote islands.

Footnote:
Please send us your funny owl pictures and jokes.