The Bungled Get Away

The two criminal masterminds planned their heist carefully. They knew
the courier would have a suitcase full of cash.  They waited for his car to pass, then pursued him at high speed, shooting at the vehicle until the courier was forced to pull over.

Armed robbers made off with what they thought was a suitcase full of cash - they were in for a surprise.
Back at their secret hideout, the bandits prepared to force the locks and spring the cash.  That's
when they noticed their plan had gone horribly wrong; instead of taking the money, they made off with a first aid kit.

Police spokesman Johann Steinlitz said, 'If
there was an award for the dumbest crooks they would certainly be in the running.

But even though they did not get what they were after, we are still investigating for attempted armed robbery and endangering
lives.  Luckily the courier was not harmed in the incident.'

Out of the Frying Pan - Into the
Fire

This month's winner of loser of the month has to go to Mr Trevor Doyle who apparently fell asleep on the bus that was returning him to his open prison near Arklow, in the south
of Ireland. He became concerned that the bus would get him to the prison too late and he would miss the deadline for the end of his weekend release. What did he do - he stole a car to get him back in time
reports Jon Henley in the Guardian Diary.

Two thieves armed only with tomato ketchup ambushed a supermarket employee as
he was taking cash to the bank, Greek police have reported.

Police later apprehended the two men.  However, the ketchup is still on
the run.

A female robber, in the town of Hinterbruehl, Austria, attempted to rob a
bank using a stink bomb as her weapon of choice.  She claimed that the box she
was carrying held an explosive device. As she banged it down on the bank counter
to emphasise her point and demand money, the glass containers smashed and the
bank was filled with an evil, olid stench.  The woman immediately turned tail and
ran out of the building overcome by the aroma she had released; she was quickly
followed by the bank staff who also wanted to get away from the smell.
Another bungled robbery.

Some People are Winners and
Thieves:

Bank customers cashed in after bungling staff put £20 notes [$40USD]
in a cashpoint [ATM] instead of tenners. Staff described the queue outside Lloyds TSB in Grays, Essex, UK, as 'a feeding frenzy'. One commented, 'People were ringing up friends to come down.'

A sign
asking customers not to use it was torn down. After forty-five minutes staff turned off the ATM, reports the Mirror
newspaper.

Kenneth Cooper may count himself the most unfortunate loser of the month.

His victim was Bridget Prentice, a small middle-aged woman.  She must
have looked an easy target in the hurly-burly of a bus queue.   What
Cooper did not know was that a detective was standing right behind Ms Prentice.
Furthermore, the victim is none other than the MP for Lewisham East and a junior
minister in the Justice Ministry.  Ms Prentice shouted, 'He's nicked my
purse,' and her 'knight in shining armour', turned out to be a off-duty
detective sergeant.

Just when Cooper thought things could not get worse, he ran straight into a
busload of police officers who just happened to be on a 'safer neighbourhood'
crime prevention exercise.  Cooper tried valiantly to escape into a
shopping arcade, but the police alerted the center's security guards.

It was an uneven contest. A spokesman for the Metropolitan Police said: 'The
man was detained and the purse recovered.  'It was fortunate that the thief
ran past a busload of police and he was caught so quickly.'

In March 2008 the case came before Judge Michael Kelly at Greenwich
Magistrates' Court.  Kenneth Cooper, of Kennington, London, pleaded guilty
to theft.   He also gets Will and Guy's award of loser of the month.

As for the victim, she admitted some responsibility for the incident because
she left bag wide open.  Colin Finch who is the Lewisham Victim Support
manager, said that petty crime was common on buses and that the victims were
usually older women.  'The way this incident happened is pretty typical and
Bridget, like other victims of crime, shouldn't blame herself.' 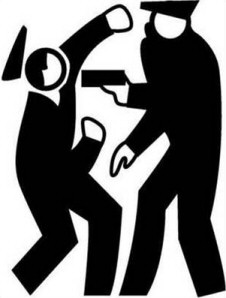 A would-be robber made a terrible choice when he targeted a man who just
happened to be a weapons and self-defence expert.

The intended victim, Robert Dwyer, 53, foiled the attempted mugging by
grabbing the gun and fighting with the suspect. Mr Dwyer, from Waterbury,
Connecticut in the US, is a federal Justice Department firearms instructor
trained in how to disarm people.

The assailant has been charged with attempted robbery.

Sting in the Tail?

The two suspects entered a power supply office and stole equipment.  Stupidly, before they left, one of the men urinated on the mains switch, causing him to receive an electric shock.  A security officer
called the police who took the injured man to hospital for emergency treatment, and the second man into custody.

Top Ten
Heists - Robberies that Were not Bungled

British Bank of the Middle East in Bab Idriss. Gold bars, stocks, jewelry
and currency were stolen from safe deposit boxes at a total estimated
between $20 million and $50 million USD.

The 1978 robbery at the Lufthansa Air Terminal in New York a team of
hooded gunmen made off with $6 million USD in untraceable American currency.
The plot was reportedly masterminded by mobster Jimmy "The Gent" Burke and
was immortalized in Martin Scorcese's Goodfellas.

In February 2002, two men held up a security van at Heathrow's Terminal 4
and made off with 4.6 million English pounds.  'Thief Row' (Heathrow)
has been a hotspot for heists over the last few decades - in 1983, gold
bullions worth 25 million English pounds were stolen from a Heathrow
warehouse.

Fifteen masked men brought the Glasgow to London mail train to a halt in
Buckinghamshire. The robbers boarded the train and then made off with 120
mailbags containing £2.5 million English pounds in used bank notes.
What should happen to Ronnie Biggs - Prison or nursing home?

When two police officers arrived at the Isabella Stewart Gardner Museum
in Boston on March 18th, 1990 saying that they were responding to a
disturbance on the property, they were quickly admitted by security. Once
they gained entry, the two men handcuffed the security guards on duty and
went to work. When they left an hour later, it was with a dozen paintings -
including works by Degas and Rembrandt, worth an estimated 300 million USD.
While IRA terrorists are suspected of the heist, no arrests have ever been
made.

Three men, armed with machine guns robbed the jewellery store in the
Carlton Hotel. The £30 million in jewels they stole were rumoured to belong
to one of France's leading jewellers, Alexander Reza. It was later
discovered that the machine guns were loaded with blanks.

The Stopwatch Gang consisted of three transplanted Canadians who made a
living robbing banks in the United States and Canada-an estimated 100 banks
and $15 million CDN. Consisting of Paddy Mitchell, Lionel Wright and Stephen
Reid, the gang was given their moniker for the large stopwatch one man wore
around his neck during jobs. The gang's greatest heist took place at a Bank
of America branch in San Diego in 1980, when the $283,000 USD they made off
with set a California record. Stephen Reid later became a noted Canadian
author after writing Jackrabbit Paroleand being paroled. In 1999, Reid
re-offended and is currently serving 18 years for armed robbery.

Thieves cleared out 123 of the vaults in Antwerp's Diamond Centre. The
total value of the stolen diamonds has been estimated at 100 million euros
and has been called the theft of the century.

The Montreal Museum of Fine Art disabled their alarm system in order to
do roof repairs. On September 4th, thieves seized upon this lapse in
security when they entered the museum through a skylight, tied up the lone
security guard and pillaged the museum's European collection, including
works by Brueghel and Rubens. The most valuable work stolen in the heist was
Rembrandt's "Landscape with Cottages," one of the master artist's last known
landscapes which had a 1972 value in excess of $1 million USD.  Despite
the involvement of the RCMP and the FBI, no arrests have been made and none
of the art has been recovered.

The Boston headquarters of Brinks Inc. was supposed to be burglar-proof,
featuring state-of-the-art security for 1950. So when a nine-member gang
stormed the Brinks office on January 17, 1950 and left with $2.7 million USD
in cash and securities, it came as some surprise, even to FBI boss J Edgar
Hoover, who claimed the job was the work of organized crime and the
Communist party. While all nine gang members were eventually apprehended,
over one million US dollars was never accounted for.

One That Nearly Got Away

Ronald Tackman slipped out of the courthouse on Centre Street Manhattan
by simply wearing a smart suit, and putting on the air of a city-slicker
lawyer.  He walked leisurely down a flight of stairs to the holding
area, where he passed off as a lawyer when the court officer challenged him.
Mr Tackman then strolled out the courtroom door and into the street.

Embarrassed detectives lost no time in scouring Washington Heights,
eventually they spotted Mr Tackman as he got off a bus, seeing that the game
was up he surrendered without a struggle.