Can you spot a real bank note amongst these joke examples of funny money?

A man tried to change a $1m
bank note in Pittsburgh, USA.  In this real-life case, a man handed over a counterfeit million dollar bill to
the cashier at a supermarket, and asked for change.

Police told the BBC that the man became abusive when a manager at the Giant Eagle store confiscated the fake note. He broke an electronic
funds-transfer machine at the counter and reached for a scanner gun.  Consequently the police arrested the
fraudster, and confiscated his funny money.

Naturally, there is no real US
bank note worth $1m; in fact since 1969, the $100 note has been the highest
denomination in circulation.

Police are investigating whether the bogus note was among a batch distributed last year as a publicity stunt by a Dallas-based religious ministry.  Actually, Will and
Guy can help the police, there are prank websites that sell funny money; indeed you can openly buy ten Trillion dollar notes for less than $7 at prankplace.com.

While this turned out to be a serious matter involving the police, it reminds us of the old joke, 'Can you change a 9 dollar note?'  To which the answer is 'Yes of course, would you like 3 threes, or two fours and a one? '

Bill Clinton... As
phony as a 3 Dollar Bill!

This bank note featuring Arnold Schwarzenegger has several unusual
features.  I expected that you noticed the denomination, Eight
Dollars; another strange feature of this funny money picture is that I
cannot shrink it without distorting the words, Arnie is truly a larger
than life character over there in California.  Incidentally, did
you notice the word 'Governator'?

A rumour circulated that Sinn Fein, the political wing of the IRA,
was involved in the £26.5m raid on the Northern Bank in Belfast in
December 2004.  It was not long before humorists created Gerry
Adams pictures on 'funny money'.

One feature of human adversity is that we use humour as a safety
valve, hence the appeal of  'funny money pictures' and black humour
jokes in times of crisis.

A US woman has been charged with forgery after trying to use a fake $1 million bill to pay her check at a supermarket. Alice Pike, 35, pulled out the
counterfeit note at a Wal-Mart store, in Georgia, to pay for
$1,672 worth of goods and asked for change, police said. The cashier immediately noticed
that it was funny money, and notified her manager who called the police.

Alice claimed it was all a misunderstanding - she thought the bill was real.  'You can't keep up with the U.S. Treasury,' said Alice Pike, speaking from jail.  Pike also told police that she got the
bill from her estranged husband, who is a coin collector.   Over here in the UK, Will and Guy are hoping that the case features on Judge Judy. 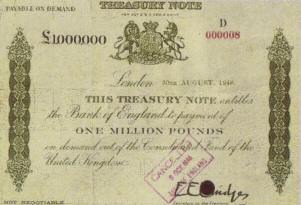 This is a real £1 million pound banknote.  But today it's only worth
£50,000.  Can this be true?  Could it be another of Will and Guy's
hoaxes?  Fact is always stranger than fiction, this is the real deal.

Genuine stories always have verifiable facts, spoofs, you can check at
Snopes.com.  This real £1 million banknote was issued on 30th August
1948 and cancelled 6 weeks later on the 8th of October 1948.

Somehow this £1 million banknote survived, and while it has clearly been
cancelled, and therefore has no face value.  However, it is of
considerable value to collectors, hence the auctioneers Spinks' valuation of
£50,000.

The Beauty of Bank Notes

Each bank note is a work of art.  The engravings are intricate and
exquisite, and the picture is chosen with great care.  By comparison,
funny money pictures always seem rushed and second rate.  Naturally
genuine bank notes incorporate the latest anti-counterfeit techniques, for
example, holograms and metal strips.  Furthermore, fake notes use cheap
paper whereas real bank notes are printed on only the highest quality paper.
Talking of paper, examining the watermark is still the best way to spot
funny money.

Myth: US $20 contains an RFID (Radio-frequency identification) chip in
president Jackson's right eye.  This is complete boloney.
However, this is one of Will and Guy's favourite funny money myths
because we can imagine the gullible placing these notes in a microwave
to destroy the supposed government tracking tag.  All we can say is
DON'T microwave your $20 dollar bills.  If a suspicion of
government spying via dollar bills turns into a paranoia you would be
better giving them to charity.

Myth: Barak Obama's education was paid for by 'funny money'.
False, Obama paid for his education by student loans.  Anyone who
is suspicious could inspect his tax records.  However, the way that
Obama bought a strip of land next to house continued to attract
accusations of financial jiggery-pokery.  From the other side of
the Atlantic this does not look the most serious charge levelled at an
American politician.

Chevy Chase is Henry Perkins, an accountant who accidentally trades
briefcases with another man.  Henry then discovers that there's five
million dollars inside the briefcase.  Penelope Ann Miller co-stars as
his wife.