Geography Lesson for the Bank Robber

First thing one Monday
morning, a robber broke into the bank, and pointed his guns at the cashier said,

'Give me all your money, or you'll be
GEOGRAPHY!'

The cashier laughed and said, 'You mean to say 'HISTORY.' 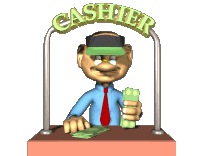 Louise went into her bank to cash a cheque.  She looked so hesitant that the cashier went to help her.  'Please sign the back of the cheque', the teller told her, 'as you'd sign a letter'.

Louise looked
extremely grateful, scribbled on the cheque and passed it back to the cashier.

Signed on the back was: 'Yours affectionately, Louise.'

The Weiner Journal reported this item last Monday: a prospective bank robber was foiled in an attempt to rob the Landeskbank-Hypothekenbank in Vienna when he was directed to a different counter.

The clerk
he approached told him that she did not 'deal with those types of queries'.

There was a big queue for the next cashier so the man, who was holding a silver box that he claimed was a bomb, fled before
repeating his request.

Clerk Maria Bertel said, 'He came up to me wearing his scarf wrapped high around his face and said he wanted money. I said I didn't
deal with money here and told him to go to the next
counter.

'It was only afterwards I realised he was trying to rob the bank. We called the police, but by the time they came he had run off.' 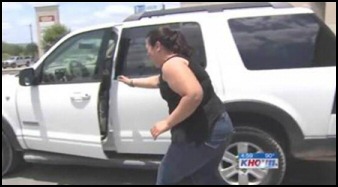 A Houston woman, identified only as Blanca to us, was cashing a check
[cheque  - UK] at the Chase bank in Uvalde, Texas.

At that precise moment some armed bank robbers stormed in.

Bianca was so frightened that she ran out and into to the first car she
saw and drove away.

It was only some time later that she found out that she had taken the
robber's getaway car. We learned that the robbers ended up getting away, but
police said they had to carjack someone to do it.

Fortunately, that driver wasn't hurt – and neither was Blanca.

Get Out Of The Car! 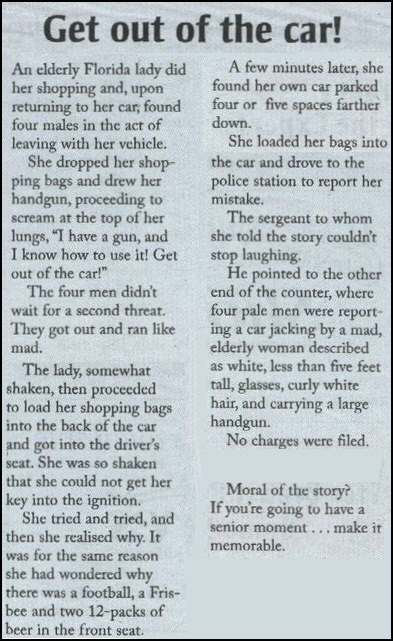 An elderly Florida lady did her shopping and, upon returning to her car,
found four males in the act of leaving with her vehicle.

She dropped her shopping bags and drew her handgun, proceeding to scream
at the top of her lungs, "I have a gun, and I know how to use it! Get out of
the car!"

The four men didn't wait for a second threat. They got out and ran like
mad.

The lady, somewhat shaken, then proceeded to load her shopping bags into
the back of the car and got into the driver's seat. She was so shaken that
she could not get her key into the ignition.

She tried and tried, and then she realized why. It was for the same
reason she had wondered why there was a football, a Frisbee and two 12-packs
of beer in the front seat.

A few minutes later, she found her own car parked four or five spaces
farther down.

She loaded her bags into the car and drove to the police station to
report her mistake.

The sergeant to whom she told the story couldn't stop laughing.

He pointed to the other end of the counter, where four pale men were
reporting a car jacking by a mad, elderly woman described as white, less
than five feet tall, glasses, curly white hair, and carrying a large
handgun.

No charges were filed.

The moral of the story? If you're going to have a senior moment ... make
it memorable.

Two bankers are in a bank when armed robbers burst in.

While several of the robbers take the money from the tellers, others line
the customers, including the bankers, up against a wall, and proceed to take
their jewelry, wallets and watches.

Robyn leaves home for University and after several weeks she turns up at
home in quite a distressed state.
'Dad, you gave me some terrible
financial advice,' she splutters.
'I did?' responds her father, 'What
did I tell you?'

Well, you told me to put my money in that big bank, and now that big bank
is in serious trouble,' explains Robyn sniffing.

'What are you talking about? That's one of the largest banks in the whole
country,' he remarks, 'there must be some mistake.....'

'I don't think so,' Robyn interrupts, 'They just returned one of my
cheques with a note saying, "Insufficient Funds".'

Financial Crises: The Funny Side

Bank Managers Use Last of Their Petrol

Then take to the streets

Masked bank robbers forced customers and cashiers to sing the Italian national anthem during a hold-up
at a bank in Guidonia, near Rome.

Failed Robbery - Can You Believe It!

A robbery at a school in Providencia, Chile was foiled when the pupils laughed at the perpetrator of the crime reports the newspaper Las Ultimas Noticias.

The
teachers, pupils and parents had been watching the rehearsal of a play which began with the words, 'This is a robbery'.

The criminal used these words and the audience collapsed in fits of laughter. So
taken aback, the robber snatched the registration money and fled from the school into the arms of the police who were on their way having been alerted to the robbery.

Funny Bank Robbery  - Candidate for Loser of the Year?

A man attempted to rob a Bank of America located in San Francisco. He walked into the branch and wrote,
'this iz a stikkup. Put all
your muny in this bag'.

While standing in line, waiting to give his note to the teller, he began to worry that someone had seen him write the note and might call the police before he reached the teller's
window. So he left the Bank of America and crossed the street to Wells Fargo. After waiting a few minutes in line, he handed his note to the Wells Fargo teller. She read it and, surmising from his spelling
errors that he wasn't the brightest tool in the box, told him that she could not accept his stickup note because it was written on a Bank of America deposit slip and that he would either have to fill out a
Wells Fargo deposit slip or go back to Bank of America.

Looking somewhat defeated, the man said, 'OK,' and left. He was arrested a few minutes later, as he was waiting in line back at the Bank of
America.

In Bowie, Maryland USA, a robber entered a bank and gave a teller a note
demanding cash. After his demand was honoured, he fled. Upon returning home,
he was amazed to find the police waiting for him.  It appears he had
written the note on the back of his bank deposit slip.