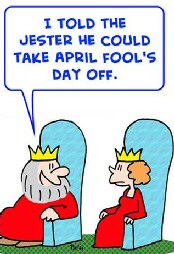 There is something special about April Fool's day morning.  Get into the mood, review past master-pieces then get ideas for a really good
practical joke.

Examples of Will and Guy's All Fools' Day Jokes

Here are ideas for April Fools jokes.  While many are well know pranks you could modify them to suit your circumstances.

What made this April Fool's Day joke convincing was that it was put on the BBC.  This was a time when the BBC was the pillar of society, no-one could believe that even on the first of April, that the BBC would put out a fake program about the manufacture of spaghetti.
This is how they pulled off the hoax.

War of the Worlds

Watch out for alien hoaxes on the first of April.  However, the first alien hoax was on the 30th of October 1938.  This famous 'War of the Worlds' Joke caught millions by surprise.  See what actually happened.

Turn a Black and White TV into Color

Will and I choose this Joke because it illustrates the naivety that you get when any new technology hits the masses.
This is how Kjell Stensson tricked thousands of Swedish viewers. 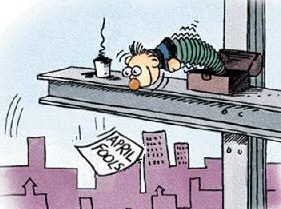 This April Fool's joke works every year.  Superglue high-value coins to a location where lots of people walk pass.  If possible stand at a discrete corner and make a video of your prank.

The well respected PC Magazine published an article by 'A.C. Feafunnoll' on April Fool's Day 2005. It stated that:

'The federal Centers for Disease Control (CDC) and National Science Foundation (NSF) have issued a stunning joint announcement: PC viruses, worms, and spyware can now be transmitted via human contact. Researchers at St. Paul's College in Virginia have isolated roughly 100 cases of systems infected by human contact, the two agencies said at a press conference at NSF headquarters in Arlington, Virginia...

One researcher, Avril Hidokwon, said she investigated a case where the Netsky.P virus spread to 10 systems by sneezing'

The story then gave a link: 'For instructions on how you can decontaminate yourself and your PC and also avoid infection.'  This URL took gullible readers to an April Fool announcement.

While this did not happen on April Fool's day, nevertheless this is an interesting hoax.  Will has prepared a
PowerPoint Presentation explaining this hoax.

Following the broadcast, thousands of locals, rushed towards the landing site. The result was traffic tailbacks of over 10 miles.
See what else Dave Ricards said on April 1st 1993.

How could a part man, part ape skull fool so many for so long.  This true story has the extra ingredient that no-one has conclusively solved who carried out the Joke.  Investigate Piltdown Man yourself

The French have their own idiosyncratic take on April Fool's day with Poisson d'Avril.  You may have guessed that poisson means fish, and this theme is taken up by French schoolboys who pin paper fish on their classmates.

It's not straightforward getting the Poisson d'Avril to stick on the victim's back.  If you make a fish and sew on a safety pin it's not easy to get people to sit still while you unobtrusively attach the poisson.  Velcro is good, but there never seems to be any around just when you need it.

As is so often the case with April Fool's day, the precise derivation of Poisson d'Avril is both obscure and disputed.  Perhaps it's just because
fish are considered stupid and easy to catch.  A more erudite origin of Poisson d'Avril claims that those born under the star sign Pisces (the fish) forget that their sign ends on March 20th.

Advice on Getting Away With An April Fools Day Prank

Most bosses have no sense of humour when it comes to April Fools Day, a recent survey of 500 executives found that 73% though April Fools jokes inappropriate in the office.

Elizabeth Fournier considers herself someone with a good sense of humor. Because she runs a funeral home in Boring, Oregon, this tends to come in handy every April 1.

Will and Guy's Brief Look at April Fools' Day 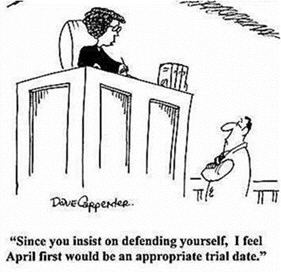 April Fools' Day is celebrated in different countries around the world on 1st April every year.  Sometimes referred to as All Fools' Day, April
1st is not a national holiday, but is widely recognized and celebrated as a day when many people play all kinds of jokes and foolishness.

The day is marked often by the commission of good-humoured or otherwise funny jokes, hoaxes, and other practical jokes of varying sophistication on friends, family members, teachers, neighbours and work associates.

Traditionally, in some countries such as New Zealand, Ireland, the UK, Australia, and South Africa, the jokes only last until noon, and someone who plays a trick after noon is called an "April Fool" and taunted 'April Fool's Day's past and gone, You're the fool for making one.'

Elsewhere, such as in France, Italy, South Korea, Japan, Russia, Holland, Germany, Brazil, Canada, and the USA the jokes last all day.

Origins and History of All Fools Day

The first known reference in English is from John Aubrey who said in 1686: 'Fooles holy day. We observe it on ye first of April. And so it is
kept in Germany everywhere.'

Another reference is from Poor Robin's Almanac in 1790:

The first of April, some do say, Is set apart for All Fools' Day. But why the people call it so, Nor I, nor they themselves do know. But on this day are people sent On purpose for pure merriment.The history of April Fool's Day or All Fool's Day is uncertain and somewhat confusing say Will and Guy.

Current thinking is that it began around 1582 in France with the reform of the calendar under Charles IX. The Gregorian Calendar was introduced, and New Year's Day was moved from March 25th - April 1st [new year's week] to 1st January.

Word travelled slowly in the 16th Century and some people only found out about the change many months/years later. More awkward citizens refused to change and continued to celebrate the last day of the former celebration - 1st April. These people were labelled "fools" by the general populace, were subject to ridicule and sent on "fool errands," sent invitations to nonexistent parties and had other practical jokes played upon them. The butts of these pranks became known as a "poisson d'avril" or "April fish" because a young naive fish is easily caught.  In addition, one common practice was to hook a paper fish on the back of someone as a joke. Further information may be found here: 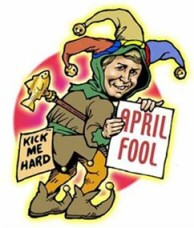 a) Scotland: April Fool's Day is devoted to pranks involving the buttocks and as such is called Taily Day.  The butts of these jokes are known as April "Gowk", another name for cuckoo bird.  The origins of the "Kick Me" sign can be traced back to the Scottish observance we have discovered.

b) England: Here jokes are played only in the morning. Fools may be called "gobs" or "gobby" and the victim of a joke is called a
"noodle." It was considered back luck to play a practical joke on someone after noon.

c) Italy: In Rome, the holiday is known as Festival of Hilaria, celebrating the resurrection of the god Attis, and is on March 25th and is also referred to as "Roman Laughing Day."

d) Portugal: April Fool's Day falls on the Sunday and Monday before Lent.  In this celebration, some people throw flour at their friends.

The Madmen of Gotham - Is This Really Where It Started? 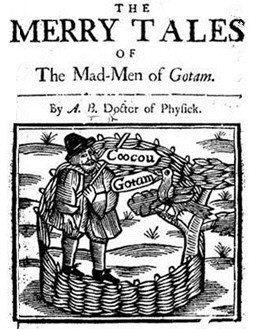 British folklore links April Fool's Day to the town of Gotham, the legendary 'town of fools' located in Nottinghamshire [Gotham is a town
between Leicester and Nottingham] in the UK.

According to legend, it was traditional in the 13th century for any road that the King placed his foot upon to become public property. So when the citizens of Gotham heard that King John [1166-1216] planned to travel through their town, they refused him entry, not wishing to lose their main road.

When the King heard this, he sent soldiers to the town. But when the soldiers arrived in Gotham, they found the town full of lunatics engaged in foolish activities such as drowning fish or attempting to cage birds in roofless fences.

Their foolery was all an act to make the King believe they were insane. The King fell for the ruse and declared the town too foolish to warrant punishment. Ever since then, according to legend, April Fool's Day has commemorated their trickery.

Three examples of the men of Gotham's fake stupidity are immortalised in this song - the words and music are from Colin Reece.

In this picture we can see the "fool" built a fence around the bird to keep it inside!

One last cuckoo he gave and then the bird flew away For what good's a cage withoutany roof.

The rider took his old horse down to the water, of course, to take a drink was all he wanted to do
And when the moon disappeared behind a cloud it was clear that the reflection in the pond would go too
"Oh you've swallowed the moon you stupid four legged loon"
Oh how the idiot sorely did shout
And then he split poor Ned from his behind to his head
On the assumption that the moon would fall out.

Off to market one day with two bushels of hay the horse and master set off from the farm
But the horse was too old to carry such a great load and so the farmer tucked them under his arms
"Oh it's too long a road for me to carry this load"
And then the farmer sat and thought with a frown
And then still clutching the sacks he climbed up on the horses back
And rode the poor nag into the ground.