We have heard of laws been set in concrete
- but never
police cars.

Can you imagine what the police officer (our informant believes it's
a woman?) would say to the duty sergeant?

'A little
brown dog suddenly came out in front of me and I swerved to miss him'.
Or 'I was following a suspect who tip-toed across the concrete and gave pursuit.'

It seems that police driving into wet cement is not confined to America.
Here is UK patrolman on his way to a 999 (911) emergency call when he got
stuck in the setting concrete.  Passers-by were too creased up with
laughter to help.  Eventually an AA rescue truck stopped and freed the
embarrassed policeman.

3)
This Picture Shows an
Even Unluckier Police Car

A high tech, theft-proof £75,000 [$ 146,000 USD] police car was stolen in
Berlin, Germany - after officers left it unlocked with the key in the ignition.
The special BMW, which features high-tech surveillance equipment and
sophisticated electronic locks and immobilisers to make it theft proof, was the
pride of the Berlin police force. It was stolen in the city's Wedding district
when two officers jumped out to chase a joy-rider on foot after he had abandoned
a stolen car.

The criminal got away and when the officers went back they found the
expensive BMW gone.

Some police officers are so overweight they can only transport one
suspect in their squad cars. Tests found some police vehicles carrying two
large officers are within 14 stone of legal weight limits, Will and Guy have
learned from the Daily Telegraph. That means they can only carry one suspect
in the back of the car and if two people are arrested the officers would
have to radio for another vehicle.

Overweight police cars may not be insured if they are involved in an
accident and officers could be left open to legal action by suspects injured
in an a crash. Officers could also be fined for driving an overloaded
vehicle on the roads and there are concerns that the weight burden could
affect the handling and stopping distances of patrol cars.

One force, Lothian and Borders, Scotland, has already decided that only
one passenger can be carried in the back of some of its vehicles because
they are close to legal weight limits. The standard patrol car is a
1.6-litre Ford Focus or a 1.3-litre Vauxhall Astra. As well as police
officers they carry computers, cameras, fire extinguishers, stingers, metal
road signs and body armour.

Perhaps police forces all over the world should regularly exercise and
have their fitness tested.

7) Understatement of the Year - Police Slow

8) Young Police Officer in
Need of a Drink?

Thanks to Hugh Muir who writes in The Guardian Diary column about a probationary police officer who found a message requesting him to call a Detective Inspector Dration. The keen,
young policeman picked up the phone and asked to speak to D I Dration.
(Dydration)

The female police officer reported to the desk sergeant about having no
luck with the witness.

'Did you browbeat him, yell at him, and ask him
every question you could come up with?' asked the sergeant.
'I certainly
did.'
'And?'
'And he said, "Yes, dear, you're right," and dozed off!'

Dodge City, Kansas.  The police announced a new revolutionary measure
to reduce traffic citations in November 2008.  Instead of fining
motorists convicted of traffic violations, Dodge City Police Department now
force the driver to trade-in their car for a dodgem. 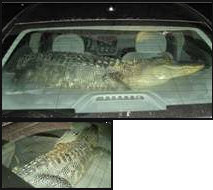 Many car drivers are happy to carry their pets by car; dogs are
commonplace as passengers all over the world. Recently, however, Will and Guy
have established from 'The Facts' newspaper in Brazoria, Texas, USA that police
who stopped William Eric Johnson for performing an illegal u-turn got a mild surprise
when they found that the driver was, in fact, a felon wanted for burglary.

What surprised the police even more was the ferocious alligator roaming free in
the car: a live alligator some six feet long. They took this photograph of the
reptile, at rest, on the rear window ledge.

A warden took the alligator into care, while the police took Johnson into
custody.