I have to say that these lawyer jokes are a little acerbic - but I like them!
Do have a read, I am sure that you will find plenty of one-liners which match your sense of humour. 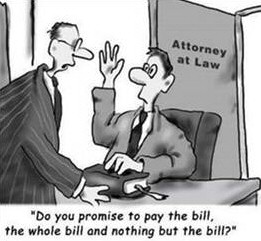 I have heard rumours that some of these jokes were written by lawyers - for
money naturally!

It is strange the way 'Funny Lawyer Jokes' has a certain 'ring' to it;
whereas funny attorney jokes, or funny legal representative jokes don't have the
same 'cachet'.

'If it weren't for my lawyer, I'd still be in prison. It went a lot faster with two people digging.'
Joe Martin

In my many years I have come to a conclusion that one useless man is a shame, two is a law firm, and three or more is a congress.
John
Adams

We hang the petty thieves and appoint the great ones to public office.
Aesop

There are 350 varieties of shark, not counting loan and pool.
LM Boyd

In my many years I have come to a conclusion that one useless man is a shame,
two is a law firm, and three or more is a congress.
John Adams

A judge is a law student who marks his own examination papers.
HL Mencken

Another Batch of Funny Lawyer Jokes

How many lawyer jokes are there? ONLY 3. All the rest of them are TRUE
STORIES.

A lawyer and an engineer were fishing in the Caribbean.

The lawyer said, 'I'm here because my house burned down, and all I owned was destroyed by the fire. The insurance company paid for
everything and I'm using some of the insurance money for this trip.'

'That's quite a coincidence,' said the engineer. 'I'm here because my house and all my belongings were destroyed by a flood, and my
insurance company also paid for everything.'

The lawyer looked confused... 'How do you start a flood?'

Lawyers Served in the Pub

A man walked into a bar with an alligator under his arm and asked the
bartender, 'Do you serve lawyers here'.

'Good', said the man, 'In that case I'll have a whisky, and a lawyer for
my alligator'.

In a criminal justice system based on 12 individuals not smart enough to get out of jury duty, here is a jury of which to be proud.

A defendant was on trial for murder.  There was strong evidence
indicating guilt, but there was no corpse.  In the defence's
closing statement the lawyer, knowing that his client would probably be convicted, resorted to a trick.

'Ladies and gentlemen of the jury, I
have a surprise for you all, 'the lawyer said as he looked at his watch.  'Within one minute, the person presumed dead in this case will walk into this courtroom.  'He looked toward the courtroom door.  The jurors, somewhat stunned, all looked on eagerly. A minute passed.  Nothing happened.

Finally the lawyer said, 'Actually, I made up the previous statement. But you all looked on with anticipation. I,
therefore, put it to you that you have a reasonable doubt in this case as to whether anyone was killed, and I insist that you return a verdict of not guilty.'

The jury, clearly confused, retired to
deliberate.  A few minutes later, the jury returned and pronounced a verdict of guilty.

'But how?'
inquired the lawyer.  'You must have had some doubt; I saw all of you stare at the door.'
The jury
foreman replied, 'Yes, we did look, but your client didn't look he just stared
straight ahead.'

Addendum
This jury story has all the hallmarks of a lawyer joke that has a grain of truth, but which has been
embellished.

Lawyer: Could you see her from where you were positioned?
Witness: I could see her head.

Lawyer: And exactly where was her head?
Witness: Just above her shoulders.

Footnote:
Please write to Will and Guy if you have any funny lawyer jokes

For example, Grant sent in this lawyer joke:

" What's the difference between a Lawyer and a Cat Fish?
a... One is a scum sucking bottom dweller and the other one is a Fish!

And Jack sent in:

Why is a lawyer's grave 12 feet deep instead of the usual 6?
Because deep down, they're really nice guys.

What do you get when you cross a libel lawyer with the demon from hell?
Another libel lawyer.

Do Lawers Have Hearts?

Jo Andrews at the Red Cross realized that they had not ever received a
donation from one of Philedelphia's most successful lawyer.  So a
United Way volunteer paid the lawyer a visit in his smart office suite.

The volunteer opened the meeting by saying, 'Our research shows that even
though your annual income is over 6 million dollars, you don't give a cent
to charity. Wouldn't you like to give something back to your community
through the Red Cross?'

The lawyer thinks for a minute and says, 'First, did your research also
show you that my mother is dying after a long, painful illness and she has
huge medical bills that are far beyond her ability to pay?'

Embarrassed, the Red Cross rep mumbles, 'Uh... no, I didn't know that.'

'Secondly,' says the lawyer, 'did it show that my brother, a disabled
veteran, is blind and confined to a wheelchair and is unable to support his
wife and six children?

The stricken Red Cross rep begins to stammer an apology, but is cut off
again.

'Thirdly, did your research also show you that my sister's husband died
in a dreadful car accident, leaving her penniless with a mortgage and three
children, one of whom is disabled and another that has learning disabilities
requiring an array of private tutors?'

The humiliated Red Cross rep, completely beaten, says, 'I'm so sorry. I
had no idea.'

And the lawyer says, 'So, if I didn't give any money to them, what makes
you think I'd give any to you?'

Just before Christmas, an honest politician, a generous lawyer and
Santa Claus all got into the lift (elevator) at the Ritz Hotel in London.
As the lift travelled from the 5th floor down to the ground level,
one-by-one they noticed a £50 note lying on the lift's floor.

Which one picked up the £50 note, and handed it in at reception?

Santa of course, the other two don't actually exist!

Finding a Priest Or a Lawyer

Betty and Martin were about to get married.  Just before the wedding, they were tragically killed in a car crash.  When they arrived at the gates of heaven
they explained to St. Peter that they were about to be married on earth, and that now they would very much like to be married in heaven.

St. Peter said, 'Betty and Martin you are a deserving couple, wait here
in the reception room.  He was gone for several months then at last, St Peter returned.

Martin said, 'We've been thinking as we were waiting here, eternity is a long time to be married'.  Betty
chipped in, 'We were wondering, if the marriage did not work you arrange for a
divorce?'

St. Peter was exasperated, and then said 'Look! It took me 6 days to find a priest up here in heaven.  How long do you think it would take me to find a lawyer up here?'

Footnote:
Please send us your funny lawyer jokes.
For example:

Comedian: do you know how to stop a bus load of lawyers from going off a
cliff?
Audience: no!