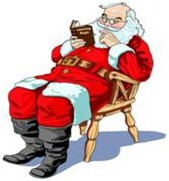 Christmas riddles are best appreciated when you're in the right mood.  For example,
the family is gathered around the lunch table, just before tucking into
the turkey, you
open a Christmas cracker.

What we find is that everyone groans eight and laughs at two of these
ten.  The strange thing is everyone has a different pair that they
chuckle at.

Thanks to the Guardian Newspaper for these funny Christmas riddles.

Christmas Crackers are called 'Bon-Bons' in countries such as Australia
and South Africa.  Will and Guy are unsure if Christmas cracker
riddles are also called bon-bons in Ireland.  These one-liners usually
make us groan rather than laugh out loud.
See more bon-bon cracker jokes here.

Will and Guy Suspect British Law is Crackers.  The 1875
Explosives Act, currently in force in the UK, apparently considers
Christmas crackers to be covered by this archaic law.  This means
that an 'explosive' cracker cannot be sold to minors.

This law was shown up to be so stupid when 22 year old student,
Heather Walsh, attempted to buy a box of 10, for Christmas Day in her
local Marks and Spencer's in York, England. Asked if she was over 16
years old Miss Walsh, who has an University degree was told the
'crackers were classed as explosives', Will and Guy have learned. She
was told by staff that they were 'protecting me by not selling me them
and they suggested that if I was left alone with the crackers I couldn't
be trusted and might blow myself up.'

You couldn't make it up, and we think that this law is definitely
CRACKERS.

It is claimed that Tom Smith, a baker of wedding cakes from London, invented the Christmas
cracker probably in the 1840's. On a visit to Paris he saw some sugar almonds [bon-bons] wrapped in twisted paper. On his return to England Tom designed a cracker shape; also inspired by the sound of
logs crackling in a fire, and founded a cracker manufacturers in 1847, which still exists today - possibly the largest manufacturer in the world.

Footnote:
Punishment for boys who no longer
believe in Father Christmas.  They get clothes for Christmas.

1) He believes in Santa Claus.
2) He doesn't believe in Santa
Claus.
3) He IS Santa Claus!

Daniel was so excited he just had to tell his parents, 'I learned in Sunday School today all about the very first Christmas. There wasn't
a Santa Claus way back then, so these three blokes
on camels had to deliver all the toys. And Rudolph the Red-nosed Reindeer with his nose so bright wasn't
there yet, so they had to have this big light in the sky to find their way
around'.

Christmas Humour - Disaster
At the Restaurant

Passing the Mayfair Chinese Restaurant on the corner of Castle Road (the premises where Peter Sellers was born) today 3rd January, on my way back from seeing Sheridan, I saw that there was
a handwritten notice on the glass in the door. It read and looked like this:

Don't know how long the notice had been there, but I did not see any smoke, fire engines or road closures!
It must have ruined their Christmas and New Year trade!

Why doesn't Santa suffer from claustrophobia when climbs down the
chimney?
Because has had his flue jab.

What did Adam say to his girlfriend on December 24th?
'It's
Christmas!  Eve.'

'Tiny', answers Mike.
'Why's
that?' enquires the barmaid.
'Because he's my newt' concludes Mike.   (Will had to explain this riddle to me.  My newt - minute) 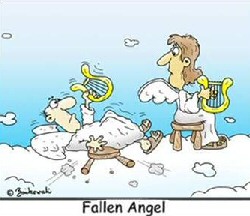 Charles Dickens
'I will honour Christmas in my
heart, and try to keep it all the year.'

Roy L. Smith
'He who has no Christmas in his
heart will never find Christmas under a tree.'

New Section of Funny Christmas Riddles.  Classic
Conundrums Each and Every One

What
Will and Guy find is that we cringe at 12 out of these 15 Christmas Riddles
- but
smile at the other 3.

First soldier:
'Pass me the chocolate pudding, would you?'
Second soldier: 'Certainly not.'

First soldier: 'Why not?'
Second soldier: 'Because it's against regulations to help another soldier to dessert.'