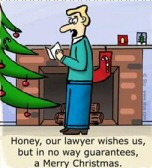 Here is Will and Guy's selection of amusing Christmas trifles.

Christmas Trivia from Around the
World

Ukraine: An artificial spider and web are often included in the decorations on Ukrainian Christmas trees.  A spider web found on Christmas morning is believed to bring good luck.
(Because it kills flies in Champagne!).

A traditional Christmas bread called
'kolach' is placed in the centre of the dining table. This bread is
braided into a ring, and three such rings are placed one on top of the other with a candle in the middle of the top one. The three rings symbolize the Christian Holy Trinity.

Canada: Father Christmas has his own personal zip code
[postcode]; it is the alphanumeric number: H0H 0H0. (Ho-Ho-Ho) In this way
people who write to Santa know that their letter will arrive safely. It has
been his personal code since 1982 and Will and Guy have learned that this
address receives some 1 million letters from all over the world each year.
Apparently, each letter received will be answered in the same language in
which it is written, which, on its own must be a mammoth task.

UK: Santa can be reached by including the following
postcode: SAN TA1

Venezuela: In Caracas, the capital, it is customary for the streets to be blocked off on Christmas Eve so that the people can roller-skate to church.

UK: It is a British Christmas tradition that a wish made while mixing the
Christmas pudding will come true only if the ingredients are stirred in a clockwise direction and each family member has a stir of the mix. Furthermore, a traditional Christmas dinner in medieval England was
the head of a pig prepared with mustard.

Norway: on Christmas
Eve all the brooms in the house are hidden because long ago it was believed that witches and mischievous spirits came out on Christmas Eve and would steal their brooms for riding.

Japan: Sending red Christmas cards to anyone in Japan constitutes bad etiquette, since funeral notices there are customarily printed in red.

Syria: Christmas gifts are distributed by one of the Wise Men's camels.

Young ladies skating in Mother Claus costumes in Yongin, Gyeonggi
Province, South Korea.  Aren't they lucky to have ice and probably snow
too.  Incidentally, South Korea is the only East Asian country to
recognise Christmas with a national holiday.

Continuing the current trend of large-scale mergers and acquisitions, it
was announced today at a press conference that Christmas and Hanukkah will
merge. An industry source said that the deal had been in the works for about
1300 years.

While details were not available at press time, it is believed that the
overhead cost of having twelve days of Christmas and eight days of Hanukkah
was becoming prohibitive for both sides. By combining forces, we're told,
the world will be able to enjoy consistently high-quality service during the
Fifteen Days of Chrismukkah, as the new holiday is being called.

Massive layoffs are expected, with lords a-leaping and maids a-milking
being the hardest hit. As part of the conditions of the agreement, the
letters on the *dreydl, currently in Hebrew, will be replaced by Latin, thus
becoming unintelligible to a wider audience.

Also, instead of translating to "A great miracle happened there," the
message on the dreydl will be the more generic "Miraculous stuff happens."
In exchange, it is believed that Jews will be allowed to use Santa Claus and
his vast merchandising resources for buying and delivering their gifts.

One of the sticking points holding up the agreement for at least three
hundred years was the question of whether Jewish children could leave milk
and cookies for Santa even after having eaten meat for dinner. A
breakthrough came last year, when Oreos were finally declared to be Kosher.
All sides appeared happy about this.

A spokesman for Christmas, Inc., declined to say whether a takeover of
Kwanzaa might not be in the works as well. He merely pointed out that, were
it not for the independent existence of Kwanzaa, the merger between
Christmas and Chanukah might indeed be seen as an unfair cornering of the
holiday market. Fortunately for all concerned, he said,
Kwanzaa will help to
maintain the competitive balance.

He then closed the press conference by leading all present in a rousing
rendition of "Oy Vey, All Ye Faithful."

*dreidel or dreydl is a Jewish
top used in games.

In pictures: 20 Guinness world records with a Christmas theme

Will and Guy have researched and found a particularly interesting
survey result from Canada.

Apparently, when it comes to gather around the tree this holiday season,
most Canadians prefer to give (87%) gifts than to receive them (13%),
according to a new Ipsos Reid poll conducted on behalf of World Vision
Canada. While six in ten (58%) say the recent changes in the economy have
caused them to re-evaluate this year's Xmas spending or traditions, the
majority of Canadians continue to hold charitable gifts in high regard.

More than 22 billion Barbie dolls have
been sold since its launch by Mattel.

The Pokemon craze saw 1000 product licences up for grabs from Nintendo.

Will and Guy Reveal the Top Names for Christmas Babies

Festive monikers have been given to almost 73,500 babies since 2000, with
Joseph the most common, followed by Holly and Faith. Other popular choices
include Sparkle, Sherry, Jesus and Happy.

A spokeswoman for online
parenting site Bounty.com, which compiled the list from its database of
registered baby names, told us, 'The Christmas period influences parent's
choices when naming babies born at this time. And what better time of year
to take inspiration from than the season of goodwill? But with children
already named Sparkle and Santa among us, it may not be long until we bump
into an "Elf" or "Tinsel" at the local supermarket!'