The Atheist and the Bear

An atheist was taking a walk through the woods. 'What majestic trees! What powerful rivers! What beautiful animals!', he said to himself. As he continued walking alongside the river he heard a rustling in the bushes. Turning to look, he saw a 7 foot grizzly charging towards him. He ran as fast as he could up the path. Looking over his shoulder he saw that the bear was closing in on him. His heart was pumping frantically and he tried to run even faster. He tripped and fell on the ground. He rolled over to pick himself up but saw the bear raising his paw to take a swipe at him. At that instant the atheist cried out: 'Oh my God!...' Time stopped. The bear froze. The forest was silent. It was then that a bright light shone upon the man and a voice came out of the sky saying: 'You deny my existence for all of these years, teach others I don't exist and even credit creation to a cosmic accident. Do you expect me to help you out of this predicament? Am I to count you as a believer?' The atheist looked directly into the light.

'It would be hypocritical of me to suddenly ask you to treat me as a Christian now, but perhaps, could you make the BEAR a Christian?' 'Very well, 'said the voice. The light went out, and the sounds of the forest resumed. And then the bear lowered his paw, bowed his head and spoke: 'Lord, bless this food which I am about to receive and for which I am truly thankful, Amen.' 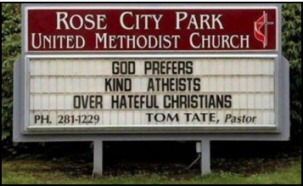 A visitor to a zoo, who was worse for wear from drinking too much alcohol, was badly injured trying to hand feed a caged bear. The rather silly man from Shandong Province was freed from the bear's grasp after keepers rushed to help. Zoo officials indicated to Will and Guy that the man's actions foolish in the extreme. He had apparently ignored warning signs instructing him not to feed the animals or reach into their cages. 'If you ignore the safety warnings, you must take full responsibility for the consequences,' a zoo official told us.  You couldn't make it up this bear story.

Roderick and the Two Bears

Roderick is rambling in the woods one day when a bear chases him up a really tall tree. The bear starts to climb the tree, so Roderick climbs up higher. Then, the bear climbs down and goes away. Again, the Roderick starts to climb down the tree. Suddenly, the bear returns, and this time he's brought an even bigger bear with him. The two bears climb up the tree, the bigger bear going higher than the first. Rod climbs even higher still, so that the bears can't reach him. Eventually, the bears go away. Naturally quite relieved, Roderick starts down the tree again. Suddenly, the two bears return, this time Rod knows he is in big trouble, as each bear is carrying a beaver.

Campground workers at the Baker Lake Resort on Washington State's Puget Sound were surprised to find a black bear passed out and surrounded by three dozen beer cans. The animal had swiped the tinnies from campers' coolers and seemed to take a liking to the local brew, Rainier Beer. The bear was chased away only to return the next day, presumably looking for more beer. Wildlife agents captured the bear using honey, doughnuts and beer for bait.

A lawyer invites his cousin from the Czech Republic to come and stay with him in Canada. The Czech cousin arrives, determined to enjoy himself. Soon they decide to go rambling. They're right out in the middle of the forest when a big grizzly bear appears. The bear hugs the poor Czech cousin to death and then eats him. The lawyer runs to the nearest village and tells everybody what has happened. The villagers form a search party and return to the forest. They come across some bears and ask the lawyer to identify the one that killed his cousin. 'It's that male bear over there.' They kill the bear and rip open his stomach, but there is nothing there. They decide to kill the female bear nearby, and when they rip open her stomach, they find the poor Czech cousin. So it all goes to show: 'Never trust a lawyer when he says the cheque is in the mail.' [check; cheque; Czech]

A Tortoise Races a Bear

A tortoise and bear met one spring day at a lake. A polar bear agreed to referee their race around the lake. While the bear took the land route, the tortoise dived through a hole in the ice. Then at the next hole it appeared ahead of the bear. The bear who was so confident of winning that he was only loping along, began to run. Then at the second hole, the turtle was still, ahead; as he was at the third, fifth, tenth and finally the last hole. While the bear tried frantically to catch-up with the tortoise he was totally out-paced. As referee the polar bear declared the tortoise had won the race, the seals cheered, even the other bears clapped. When everyone had gone home, the tortoise tapped three times on the ice. Up came his brothers, his sisters, his cousins who had been manning the intervening holes in the ice. When the whole family emerged, the tortoise said, 'we may be slow of foot, but we are not slow of wit'. Footnote: Please send us your funny bear stories.