I
Wandered Lonely As a Teddy Bear?

I Wandered Lonely as a Cloud

The above teddy bear cloud reminds me of the following famous William Wordsworth poem.

Apparently all geniuses day dream.  Isaac Newton and Albert Einstein got
their insights from day dreaming.  Personally, I am with Archimedes, my eureka moments come in the bath.
See more about
Lenticular Clouds.

Every crowd has a silver lining.  Phineas Taylor Barnum

This Could Be That Cloud with a
Silver Lining?

My mind was miles away ....... the closest it has ever been for decades.

Mary Hemsworth has interesting book on clouds that look like things.

Incidentally there are 433 references in Google to a poem entitled: 'I wOndered lonely as a cloud' .  While I am not an English Literature specialist,
I have it from an Emeritus Professor of Swansea University that I wAndered is the correct version.  Wordsworth intended the verb to mean roam and not mean ponder.

I wandered lonely as a cloud
That floats on high o'er vales and hills,
When all at once I saw a crowd,
A host, of golden daffodils ;

Beside the lake, beneath the trees,
Fluttering and dancing in the breeze

Continuous as the stars that shine
And twinkle on the milky way,
They stretched in the never-ending line
Along the margin of a bay :
Ten thousand saw I at a glance,
Tossing their heads in
sprightly dance.

The waves beside them danced ; but they
Out-did the sparkling waves in glee :
A poet could not but be gay,
In such a jocund company :
I gazed-and gazed-but little thought
What wealth the
show to me had brought :

For oft, when on my couch I lie
In vacant or in pensive mood,
They flash upon that inward eye
Which is the bliss of solitude ;
And then my heart with pleasure fills,
And dances with the
daffodils.

This amusing teddy picture made Guy cry, and Will laugh!

Life's Not Always a Picnic

A teddy bear is working on a building site. He goes for a tea break and
when he returns he notices his pick has been stolen.

The bear is angry and reports the theft to the foreman. The foreman grins
at the bear and says "Oh, I forgot to tell you, today's the day the teddy
bears have their pick nicked." 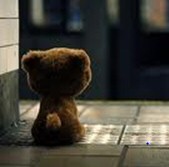 Please, have you seen a teddy?
He's floppy with only one ear,
in
truth he's seen better days
But he's one dearly loved little bear

It's only a baggy old plaything,
But from one special boy he's been
parted.
His name for some reason is Gargum
And his owner's been left
broken hearted.

He is somebody's very best friend
whispered secrets this bear's
duly kept,
as wrapped up in each other's arms,
this inseparable pair
have slept.

Searched for in all sorts of places,
we've all been caught up in the
hunt
Turning the house upside down,
Inside out, top-to-bottom n
back-to-front.

We found other things he had lost,
behind, in and under the chairs,

like the hatless and now voiceless Woody,
in the glory hole under
the stairs!

I've asked every one of our neighbours,
Been and knocked on so many
doors,
Asking for news of poor teddy
And now I am knocking on yours.

Please look in your shed and pet's basket,
with good news ring me on
my mobi.
See, it's not just any old Teddy
This one belongs to our Toby!

Footnote:
This is an original poem by
Joy James, it's not for
reprinting without permission.

We think this is a genuine Teddy Bear picture - what do you think?

Protective Cat Pictured With His Teddy

The 'Daddy' of All Teddy Bears - Teddy Roosevelt

More
Down to Earth Bears

In his time Knut was the world's most famous polar bear.  We see
him here as playful as usual.  On the very day this photo was taken in the Berlin Zoo, the two millionth visitor came to see him.  Doubtless, the zoo does a roaring trade in Knut style 'Teddy Bears'.

The problem is that Knut is loosing his cuddliness and started to maul other animals or even his faithful keeper. Meanwhile, humans are turning on other humans.
After a board meeting, the zoo has lost Gerald Uhlich, its finance director, who is credited with turning Knut into the most famous polar bear in the world. The move could mark the beginning of the end of the
Cult of Knut.

Mr Uhlich positioned Knut as a mascot for the climate protection movement, the symbol of a species threatened by melting ice-caps. The bear even made it on to the cover of Vanity Fair with
Leonardo DiCaprio and an iceberg or two.  Some zoologists have been warning that the Knut cult should end, above all because there was a distinct trend in the media to humanise the bear.

Knut was one year old on 5th December 2007 and now that he ways more than
280lbs his keeper can no longer go in and play with him as he did when he
was a cub. 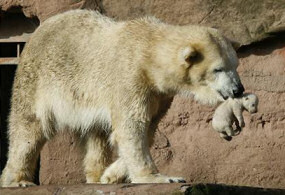 What happened was that in captivity at least one mother bear has killed her
cubs.  Some say it's because they were sickly, others say it's due the
unnatural surrounding of captivity.

Zoo keepers are facing a dilemma, they
want polar bear mothers to raise their cubs themselves, but they feel they
cannot sit back and do nothing if the mothers wantonly kill their cubs as a bear
called Vilma killed her two cubs.

The latest bear mother in the Berlin zoo is
Vera.  She has been acting suspiciously with her cub and keepers fear that
she will harm it.  It seems that Vera has been dropping her baby on the
rock in a none too gentle manner.  Consequently, the keepers are hand
raising this cub which some have named 'Snowflake'.

Snowflake, like Knut was
born in December (one year later), and like Knut is rapidly becoming the center
of attention. 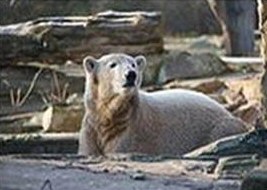 Knut at the age of 2 years [December 2008]. Less cuddly than before but
still loved by his millions of fans!

He remains located at Berlin Zoo and is the subject of a claim from
another zoo in northern Germany. It is established that his presence in the
Berlin Zoo has increased their visitor numbers.

Knut's fame is estimated to have brought in revenues of roughly six
million Euros [$8,506,268 USD] through merchandising.

Knut the polar bear, who became world famous after he was hand-reared by
keepers after his mother rejected him, has died at the age of four. A
spokesman for Berlin zoo, where Knut was kept, said the bear was found
floating in the pool inside his enclosure.
Bear keeper Heiner Kloes said
the cause of death was not known. Usually polar bears in captivity often
live for 30 years