Did you know that a collection of bears was a 'Sleuth'?

I'm
Gonna be a ear

When you're a girl
bear, you birth your children (who are the size of walnuts) while you are sleeping and wake to partially grown, cute, cuddly cubs. I could definitely deal with that.

If you're a mama bear, everyone knows you
mean business. You swat anyone who bothers your cubs. If your cubs get out of line, you swat them too. I could deal with that.

If you're a bear, your mate EXPECTS you to wake up growling. He EXPECTS that you
will have hairy legs and excess body fat. 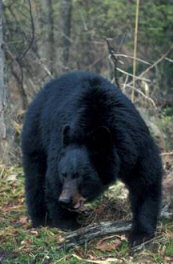 Patients at a medical clinic were shocked to see a new patient one Friday morning,
when a hungry, young black bear walked in through an automatic door without disturbing anyone.

The 125-pound male bear who was probably hungry from a winter of hibernation, wandered into the Presbyterian
Medical Group gastroenterology laboratory, a relatively small building off one the main roads in Rio Rancho, north of Albuquerque, New Mexico, USA, in the early morning hours.

Bears are nosey animals, but this time we think they're working together
to find their lost frisbee. 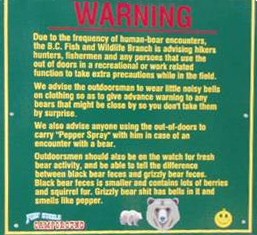 In light of the rising frequency of human/grizzly bear conflicts, the Montana Department of Fish and Game is advising hikers, hunters, and fishermen to take extra precautions and keep alert for bears while
in the field.

We advise that outdoorsmen wear noisy little bells on their clothing so as not to startle bears that aren't
expecting them. We also advise outdoorsmen to carry pepper spray with them in case of an
encounter with a bear. It is also a good idea to watch out for fresh signs of bear activity.  Outdoorsmen should recognize the difference between black bear and grizzly bear poop.  Black bear poop is smaller and
contains lots of berries and squirrel fur.  Grizzly bear poop is larger and has little bells in it and smells like pepper.

See the bear-feeder caught on camera

Two guys were walking in the woods one day when they came across a bear.

The bear noticed them and started growling and generally getting really mean.  It started to chase one of
the guys, who, as it turns out, was from Czechoslovakia.  Unfortunately, the bear soon caught up with him, and ate him alive.

Meanwhile, the other guy turned around and ran for his life. A little while later, the second guy found a
park ranger station and  told his story. The ranger took his gun, and they both went out in search of the bear, in order to destroy it.

Soon, they came across two bears, one male, and one female. The
ranger turned to the other guy and said, 'Quick... tell me which bear ate your friend!'

The ranger levelled his gun and got ready to shoot. 'I'm not really sure,' said the other guy, 'they both look so
similar.'

The ranger promptly aimed and shot the female bear. The male ran off.  Using his knife, the
ranger cut open the belly of the female and found the body of the other man.

'But why didn't you shoot the male when I thought it was the male who ate my friend?' the other man asked.

Well,' said the
ranger... 'I never trust anyone who says that the Czech's in the male!'

Come and join
me - but please bring your picnic! 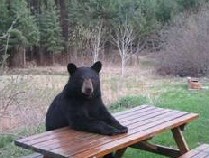 Two backpackers, Ted and his mate John were tramping through the woods
when, to their horror, they saw a large ferocious looking bear sitting at
the picnic table they had chosen on which to eat their lunch.  Ted,
although dismayed, immediately removes his heavy hiking boots and starts to
puts on his running shoes.

John, equally concerned, calls out, 'Hey, Ted. You're wasting your time.
You'll never outrun that bear, so why are you putting those on?'

George, the barman enquires, 'What's with the huge pause?'
The
bear answers, 'Oh, them, I've had them all my life.'

A middle school teacher, from Missoula, Montana, USA, suffered bruising
to his ribs, his ego and received large scratch on his back after he rode
into a black bear while cycling to school earlier this week. Mr Jim Litz
said he was travelling about 25 mph when he came upon a rise and spotted a
black bear about 10 feet in front of him. He didn't have time to stop and
drove into the animal.

Will and Guy have learned that he then tumbled over the handlebars;
whereby his helmet hit the bear's back and the two went cart wheeling down
the road. The bear rolled over Litz's head, cracking his helmet, and
scratching his back before quickly scarpering away up a hill above the road.

Fortunately for Mr Litz, his wife drove by shortly after the crash and
was able to take her husband to hospital. We believe that he will be able to
return to teaching science at Target Range Middle School by the end of this
week. 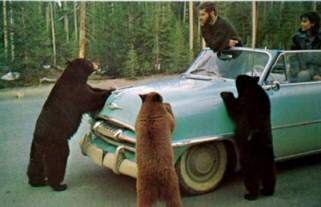 Grandmother of ten, Judith Malloch, 66, of Boynton Beach, Florida, USA
takes photographs only yards away from huge bears. The group of professional
wildlife photographers and locals Judith travelled with were armed only with
a single can of pepper spray to use in case of attack. 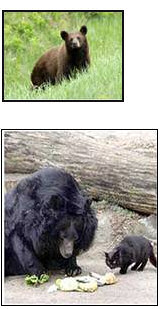 Guests staying at the Best Western Twin Peaks Motel in Ouray, Colorado, USA,
received a shock when 'a cute, little cinnamon bear' strolled into the hotel
grounds and climbed into the swimming pool with them.

The motel manager informed us that the bear appeared to enjoy its dip and was
no danger to the other guests; apparently it is not uncommon for bears to wander
across the motel's grounds as it borders on the wilderness.

An association between an Asian black bear and a cat is still bearing up well
after seven years and has blossomed into a lifelong friendship Will and Guy have
discovered. The pair have been friends since Muschi the cat strolled into Mausi
the bear's enclosure at Berlin Zoo, Germany, in 2001. We have learned that the
black bear had been suffering from depression prior to meeting up with the
friendly black feline.

The zoo's caretaker, Thomas Dvrflein, added, 'Muschi entered the enclosure of
Mausi nearly seven years ago and started to eat the food in the enclosure. She
was accepted straight away and they have been inseparable ever since, sharing
food, cuddling and spending their days together.'

A visitor to a zoo, who was worse for wear from drinking too much
alcohol, was badly injured trying to hand feed a caged bear. The rather
silly man from Shandong Province was freed from the bear's grasp after
keepers rushed to help.

Zoo officials indicated to Will and Guy that the man's actions
foolish in the extreme. He had apparently ignored warning signs
instructing him not to feed the animals or reach into their cages.

'If you ignore the safety warnings, you must take full responsibility
for the consequences,' a zoo official told us. You couldn't make it up.

A DNA test on a bear has confirmed what Inuit trackers in the far northern of Canada have claimed of for years; namely the first proven case of a cross between a grizzly,
Ursus arctos and polar bear, Ursus maritimus in the wild.

Roger Kuptana, an Inuit tracker from the Northwest Territories, suspected the American hunter he was guiding had shot a hybrid bear after noticing its white fur was spotted brown and it had the long claws
and slightly humped back of a grizzly

Tests confirmed that a bear killed by a US hunter in
Canada's
far north last month is the first Grizzly-Polar bear cross ever discovered in the wild.

'It actually is a hybrid, 'Judy McLinton, a
spokeswoman for the Northwest Territories'
environment and natural resources department in Yellowknife, said.

The Idaho native told The National Post, 'Everybody thought it was a Polar bear, and
then they started looking more and more and they seen other features that resembled some of a Grizzly as well.'

The bear had thick, creamy white fur, typical of Polar bears, but its long claws, humped back
and shallow face, as well as brown patches around its eyes, nose, back and on one foot are Grizzly traits.

Geneticists have linked the two species.  They believe Grizzly bears ventured north some 250,000
years ago to hunt seals and that their fur turned white over time.

Thus, the Polar bear was born.  Odd couples have produced mixed offspring in captivity. But this is the first discovery of this mixed
breed in the wild.  The two species mate at different times of the year and inhabit vastly different regions - one lives on Arctic ice floes, the other in forests.  But hunters have reported seeing
Grizzlies further north in recent years as the Arctic warms.  A laboratory in western Canada examined the bear's
DNA to make the determination.

Geneticists have linked the two species.  They believe Grizzly bears ventured north some 250,000
years ago to hunt seals and that their fur turned white over time.