Koala 'bears' are marsupials, and thus are not closely related to brown bears.
In fact Australians never use the words Koala and Bear in the same
sentence. 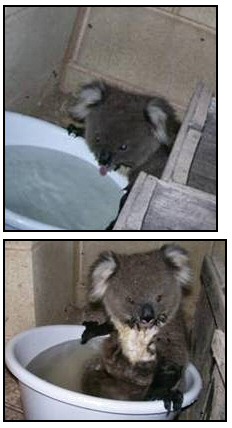 What do you think Koala do when the temperature soars?

Here is one example: these recent photographs were taken on 30th January
2009 in South Australia where the temperature reached highs of 40C+ everyday
for over a week, consequently the land became very arid and dry and wild
animals began to suffer.

This koala strolled onto the back porch of his friend's house looking for
relief from the incessant blazing heat. A washing up bowl of water was
provided. The pictures then tell the story of what happened next.

A regular visitor to our site, John Reeves, sent us these pictures which
he received from his friend, Victoria Hill, who lives in Sydney, Australia.

Ten Interesting Facts about
the Koala

Joey the youthful koala walks into a bar, sits down, makes himself
comfortable and orders a sandwich.

Joey eats the sandwich, stands up, spins around, pulls a pistol out of
his pouch, [remember he is a marsupial] he shoots the piano player and
proceeds to walk out of the bar.

The bartender, in shock, shouts loudly at Joey, 'Oy you! Who do you think
you are, you ate my sandwich and shot my piano player, and just where do you
think you're going?'

Joey answers promptly, 'Listen up mate, I'm a koala. Look it up.'

The apoplectic bartender takes down the Chambers dictionary from behind
the bar and looks up the word - Koala: The dictionary says: "n. a marsupial
that eats shoots and leaves."

A doctor's surgery put an advert in the local paper: "Receptionist
wanted. Must be able to type, send emails, and speak five languages."

As soon as the ad appeared the surgery door opened and in scampered Joey
the koala.

Joey nodded his head towards the advertisement but the doctor man shook
his head commenting, 'I'm afraid we can't give you the job. You have to be
able to type.'

Joey climbed up onto the chair next to the desk and typed away.

Again the doc shook his head saying, 'You have to be able to send
emails.'

Joey the koala immediately sent an email to [email protected]

The doctor shook his head yet again, this time murmuring, 'You have to be
able to speak five languages.' 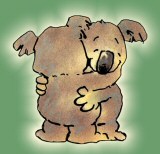 Footnote:
Please send us your funny koala pictures, jokes and interesting facts.
Follow the lead of Jill Curnow who wrote:

Cleland Wildlife Park  This wildlife park is less than half an hour
from the centre of the Adelaide CBD and has all different animals running
around for people to pet.  It's a great place to visit even for those
of us who live here all the time.

G'Day Folks - Is Your Kangaroo Missing?

Strange to report but we have heard that a "Roo" is on the loose and
wandering around New York State, USA.

If you happen to bump into him we can reveal that his name is Bandit ; he
is about 3 feet tall, and is one-year-old *wallaroo, which is a large
species of kangaroo.

Police have seen Bandit but apparently but failed to apprehend him and so
he has remained on the loose for some 3 weeks.