Will and Guy's collection of amusing Vuvezula cartoons and images from the 2010
Football World Cup in South Africa.

The vuvuzela is 65cm plastic blowing horn immortalised by the 2010
football World Cup.  Owing to its simplicity the origins of the
instrument is hard to trace.  Similar blowing horns are found in Latin
America, while those trying to trace it's origin via the Zulu name vuvuzela
come up against synonyms notably lepatata. 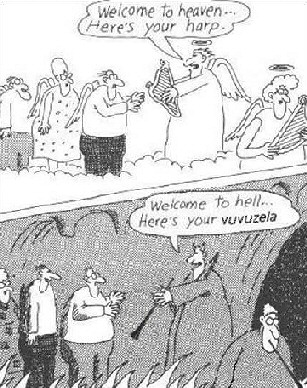 The Lion Sleeps Tonight is a song recorded by The Tokens and originally
written as Mbube by Solomon Linda. The song is also recorded by many artists
as Wimoweh.

The disappointed and dispirited England supporters sang the following
lyrics to this famous tune as they left the match where England lost to
Germany:

As God was leaving he said to the devil, 'Don't you realise that all the
'good' players go to heaven?" 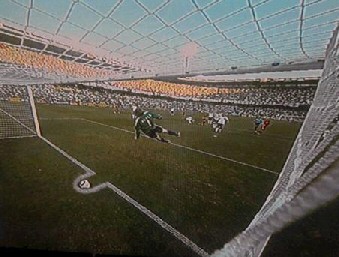 My favourite football tale was not of the World Cup itself, but of a
Soweto team who drove out of town, walked backwards and barefoot off the
team bus into the the bush until they found a termite mound, urinated on
it, then walked backwards to the bus again - and still didn't win the
league. 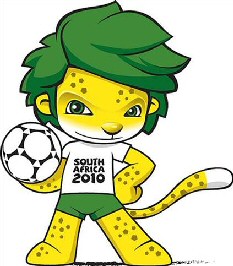 The World Cup 2010 Mascot "Zakumi" is a green haired leopard has been
announced as the official mascot for the event.

The word "Zakumi" derives from "Za", which is South Africa's abbreviation
and "Kumi", which is a representation of ten in a majority of the African
languages, denoting 2010.