What does a witch ask for in a hotel?
Broom service.

Halloween One-liners
What do you call serious
rocks?
Grave stones.

What do you call pretend rocks?
Shamrocks.

It was mid-October and I was waiting for my wife, Julie, at the checkout at
Walmart supermarket in Worcester, Massachusetts, USA, I noticed that someone had
left behind their broom.

When no one came to claim it, I went outside to search for a couple I
remembered seeing at the cashier's desk. I spotted them getting into their truck
and hurried over.

'Excuse me,' I said to the young woman, 'but did you by any chance leave your
broom inside?'
'No,' she retorted quickly and with a smile, 'we came by truck.' 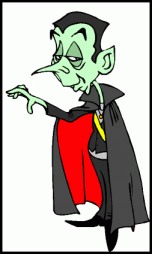 Here are Halloween quotes to share with your friends.

Kids are great at telling, devising and modifying Halloween jokes.
Here are Will and Guy's collection of clean one-liners to keep your children
amused on October 31st. 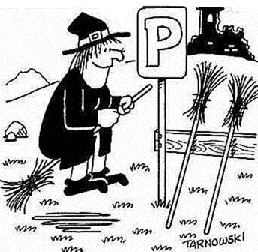 John decided to play a trick on his superstitious friend Henry.  Now Henry liked a drink at the local pub every Friday night.

One dark night Henry set off for home, meanwhile John hid in the churchyard.
The scene was set.  Henry staggered on home, as he passed the
churchyard he said out loud, 'Where am I.'

John, from behind a grave, replied in a sepulchral voice: 'Ammmongst the living.'

'Then where are you then?' asked Henry.

'Ammmmongst
the deeaddd' wailed John.  Henry sobered up and ran home faster than he had ever run before.

As a boy, the above yarn as told by my Uncle John would
enthral we children on a cold wet autumn night.  (We
celebrated 5th of November not Halloween)

At a distance of 50 years I find it only moderately amusing.
Perhaps I dont have his intonation and gestures. My final
thought, is the internet killing yarn telling? Do you ever meet
an old codger who can tell an original tall story?

Footnote:
Please send us your
clean Halloween jokes for kids