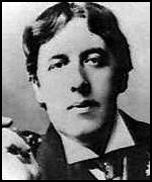 'I have nothing to declare but my genius'.

Born Oscar Fingal O'Flahertie, on 16th October 1854, he died on 30th November 30, 1900.  His mother Jane was a poet, while his father, Sir William Wilde, was prominent Irish surgeon.  Both parents were prolific authors
so it was no surprise that he inherited such literary talent.

One can only guess how he delivered his quips, but we can be sure that they gained extra power from Oscar Wilde's
own delivery of his pithy wit.

A Selection of Oscar Wilde
Quotations to Get you Started

After being lost for over 120 years, this Oscar Wilde quote turned up in the cover of an old book:
'One can exist without art, but one cannot live without it.' 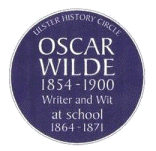 From the above quotes, clearly Oscar Wilde was not a stand-up comedian.  Instead of jokes, what you find amongst Oscar Wilde quotes are witty
one liners and repartee, for example:

A pompous speaker who had a great opinion of himself gave a long after-dinner speech.  He then made the mistake of turning to his neighbour on the top table, who happened to be Oscar Wilde, and
asked, 'How would you have delivered that speech?'  Under an assumed name', came the reply from Oscar Wilde.

What surprises
Will and Guy is when we track down a witticism, I find that the source was an Oscar Wilde
quotation, or a character in one
of his plays.  For example:

Work is the curse of the drinking classes.
or:
One should always play fairly when one has the winning cards.

Oscar Wilde
On the
Subject of Women

Will and I tried to select ten of Oscar Wilde's best, and most witty quotes.  The reason that we failed that our opinion changed from one day to the next.  It was just so difficult to
leave out any of his quotes, they all have a place where they sum up a situation succinctly.  This is why we have stayed with this long list of witty sayings. 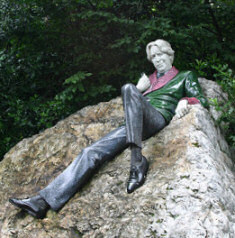 While I knew that Oscar Wilde was buried in France, I was surprised to find a
statue to the great man in Dublin's Archbishop Ryan Park.  It looks just
like a modern day dandy posing on a rock.

His last resting place is now the Père Lachaise Cemetery in Paris, France.
Will reports that Oscar's tomb in Père Lachaise, Paris was designed by sculptor
Sir Jacob Epstein.  When Will was there he could not find an traces of
lipstick that others report seeing on Oscar Wilde's tomb.

Quotes from Oscar Wilde Plays
Include: 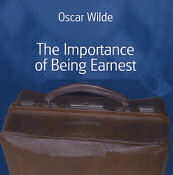 Back in 1891 homosexuality was illegal and Oscar formed an illicit relationship with Lord Alfred Douglas (known as 'Bosie').  They probably would have got away with it if Oscar had not sued Bosie's

father for libel.  As always, the truth is an absolute defence to libel, therefore Oscar lost his case.  Worse was to follow when the police felt they had to take an interest; after all homosexuality was
illegal, and Oscar's
activity was now public knowledge.  It was a forgone conclusion that his prosecution for 'Gross indecent acts'
would lead to conviction and a goal sentence resulted.  Even in
prison he continued to exercise his literary skill and wrote 'De Profundis' A book about his relationship with 'Bosie', also the famous 'The Ballade of Reading Gaol'.

Then as As Oscar was standing in handcuffs in the rain, waiting to be
taken to Reading Gaol after his court conviction, he was heard to say: "If
this is how Queen Victoria treats her prisoners, then she doesn't deserve to
have any."

After Oscar Wilde was imprisoned, his wife Constance changed her name to Holland.  She felt it best to move abroad where she was less likely to be
recognised and humiliated.

In July 2009 there was an unlikely twist to the Oscar Wilde saga, Paolo
Gulisano, L'Osservatore Romano, the Vatican newspaper, now says that Wilde
was much more than "an aesthete and a lover of the ephemeral".  He had
been "one of the personalities of the 19th century who most lucidly analysed
the modern world in its disturbing as well as its positive aspects",
Gusilano wrote.

This was a surprising turn of events, because while Oscar Wilde converted
to Catholicism on his deathbed in 1900, during his lifetime he had written
many acerbic words about the church, for example:

One can survive everything, nowadays, except death, and live down everything except a good reputation.

As Oscar lay dying, penniless in a French hotel, he looked around at the room and said:
'My wall paper and I are in a battle to the death, one or the other must go'.

Those were his final words.

Footnote:
Please write to Will and Guy if you have a good Oscar Wilde quote or a witty one-liner.