Will and Guy have selected some famous quotes attributed to the comedian Groucho Marx.  We hope you enjoy the humor of these clean yet funny one-liners.

This is one of
Guy's favourite Groucho Marx One-liners:

The beauty of this one-liner is that you that can change, 'Wonderful Evening'
to: 'Supper', 'Football Match'
or other suitable phrase to suit your humor.

More Groucho Marx Quotes - Many Taken From His Films

Woman:  This leaves me speechless.

Groucho: Well, see that you remain that way.

Groucho: You're just wasting your breath, and that's no
great loss either.

Woman: This is a gala day for you.
Groucho:
Well, a gal a day is enough for me. I don't know if I could handle any more.

Groucho: Ladies and gentlemen...I guess that takes in
most of you.

Jason Kenniz researched these Groucho Marx gems, you can see and hear
more of his genius at this site
dedicated to
Grouch Marx quotes.

Groucho grew up in a Jewish neighbourhood which had Irish-Germans on one side and Italians on the other. Hence '
The Marx Brothers'
developed 'ethnic'
accents, based on this background, as part of their
comedy.

He walked with an extremely distinctive 'chicken-walk'
lope and sported an exaggerated moustache, a cigar and very bushy eyebrows.  Groucho perfected the 'wise-crack', quick repartee, which was
sometimes amusingly insulting.  In his later life he was frustrated by the fact that when he insulted someone they thought it was humour and part of his act when in reality he meant the slight.  For
example, Groucho wanted to insult a woman so he said in her hearing: 'She got her looks from her father. He's
a plastic surgeon.'

Woody Allen
thought Groucho Marx, '..the best comedian this country ever produced.'
Many people would agree. He died in 1977 at the age of 86. 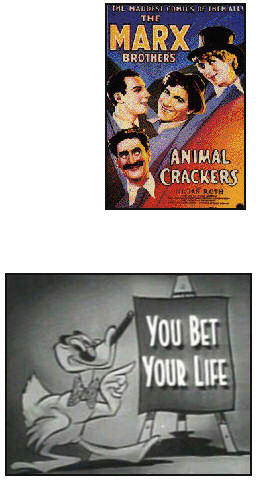 Groucho Marx T.V. and Radio Show - You Bet Your Life

'You Bet Your Life' started on American radio in 1947 and soon made the
transition to the NBC television network.  The show ran from 1950 to 1961.

The show started with the 'Secret Word'.  The live audience new the
word, and if the contestant uttered it a toy duck descended from the ceiling
with a $100 in its beak.

Contestants were paired and then answered questions
to boost their cash payout.  Precise formats changed over the years as the
show experimented with ways of increasing the tension while the contestants
built towards jackpots of $1,000, later raised to $10,000.

Groucho was naturally the star, and full of his
off-the-cuff repartee.  One urban myth that won't die concerns what a
Groucho said to a woman who had 22 children.

Groucho asked her, 'Why so many children?'
'Well, I just love my husband.' the woman replied.

Groucho's riposte allegedly
was:  'I love my cigar, but I take it out of my mouth once in a while.'

Despite the story resurfacing at regular intervals, no sound track or recording
exists of this Groucho Marx quote.  Indeed, later Groucho denied ever
saying it.  As the myth grows, so the story is embellished, for example, the audience's reaction was taped and replayed whenever NBC needed
canned laughter.

Addendum 1
Gary Kelly wrote in with this snippet.

Addendum 2
The cigar myth is no myth. At least that's
not what my step father told me growing up. And the reason I believe him is
the woman on the show was his grandmother and she actually had 22 children
and was in the Guinness book of world records at the time. Which is why she
and her husband were asked on the show.   J.E.

Footnote:
Please write to us with
your funny Groucho Marx joke.