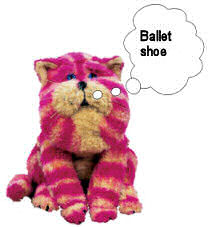 Every successful TV cartoon programme must have a likeable character such as Bagpuss the cat.

One secret of Bagpuss's success is the gentle way that he orchestrates the other characters.  At the start of the programme you can literally see Bagpuss think - thought bubbles come out of his head.

Emily brings, or finds an intriguing objects such as a ship-in-a-bottle. Then she invokes Bagpuss by singing: 'Wake up and look at this thing that I bring'

The programme continues by the other characters coming to life. Professor Yaffle may give a scientific explanation; whereas Madeleine would give some unlikely, but more interesting story involving mermaids. Incidentally, they say that Bagpuss's strange colour was the result of trying to tie-dye a soft toy, but somehow a magenta powder was substituted for the marmalade colour.  It turned out to be an inspired touch.

While it's his show Bagpuss has a laid-back role.  He listens considerately to the mice as they sing their songs.  And Bagpuss watches benevolently as the mice play tricks on Prof Yaffle.

Emily (Was actually the creator's daughter)

The Bagpuss programme always started in the same way.  Emily, the shop's owner found a broken object then put it in the shop window.  Then she would say this ditty:

Bagpuss, dear Bagpuss Old Fat Furry Catpuss Wake up and look at this thing that I bring
Wake up, be bright, be golden and light Bagpuss, oh hear what I sing

Madeleine Remnant is cleverly named as she is a rag doll made of off-cuts. Mostly, she sits in a chair.  Her greatest love is to tell stories to the mice of unlikely explanations of Emily's objects.  Also watch out for Madeleine singing with Gabriel the toad.

Professor Yaffle, is occasionally addressed as "Augustus Barclay Yaffle". As his title indicates, he provides the intellect.  While Prof Yaffle is
knowledgeable, the mice like nothing better than to play tricks on this distinguished old woodpecker.

Gabriel Croaker is a toad who is a virtuoso on the banjo, for example, in episode 2 he sings 'The Bony King of Nowhere'.   Gabriel lives on top of the round tin which you see on the shelf.

The mice provide the hustle and bustle to the TV cartoon.  They are always scheming against Prof Yaffle.
For instance pretending that the 'Mouse Mill' makes chocolate biscuits in episode 8.

Children love it when the mice sing, often with Gabriel the toad, for example in the episode 12 'Flying' they sing about the woman who brushes the cobwebs out of the sky.   Then there is the Marvellous Mechanical Mouse Organ, which not only plays music, but also shows
pictures onto a screen.

Bagbuss features six mice : Charliemouse, is the leader of the mice clan.  Catch phrase: 'We will fix it'.

Eddiemouse, is the one in the blue suit with a green jacket.

Jenniemouse, is usually in a blue dress.

If you read the Bagpuss books, you may also encounter  Millymouse and Tillymouse.

The History of Bagpuss the Cat

Peter Firman and Oliver Postgate created the Bagpuss series for BBC Television.  Amazingly, such is the popularity that the series has been
repeated at least 25 times since that first run in 1974.  One secret of achieving immortality is to die young and on this score, Bagpuss
terminated after just these 13 episodes.  As you just read these titles, I am sure that your mind can invent a story for each one - that is the essence of Bagpuss, and why it appeals to successive generations of children.

Bagpuss Award
Much to our surprise, in 1999 Bagpuss was named the favourite BBC children's programme of all time.  We thought the survey would favour more recent TV cartoons such as the Teletubbies.