Share
Tweet
Pin
Share
Email
A collection of jokes, one-liners, short stories and funny pictures. Each page has a bumper selection of funny but clean humour.

Cat at peace - Aren't they always! 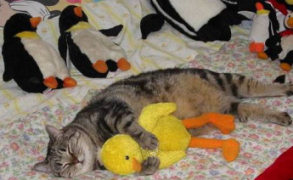 Selection from our joke pages

a) A policeman spotted a jay walker and decided to challenge him, 'Why are you trying to cross here when there's a zebra crossing only 20 metres away?' 'Well', replied the jay walker, 'I hope it's having better luck than me.' b) The first rule of holes: If you are in one, stop digging. c) Ford had a problem naming a car in Brazil when the Pinto flopped. The company found out that Pinto was Brazilian slang for 'tiny male genitals'. Ford pried all the nameplates off and substituted Corcel, which means horse. 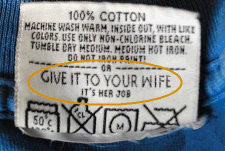 Those Wanting to be Married

Father Henry was planning a wedding at the close of the morning service. After the benediction Father Henry had planned to call the couple down to be married for a brief ceremony before the congregation. For the life of him, he couldn't think of the names of those who were to be married. 'Will those wanting to get married please come to the front?' Father Henry requested. Immediately; nine single ladies, three widows, four widowers, and six single men stepped to the front.

The husband had just finished reading the book 'Man of the House.' He stormed into the kitchen and walked directly up to his wife, pointing a finger in her face, he said, 'From now on I want you to know that I am the man of the house and my word is law. I want you to prepare me a gourmet meal tonight, and when I'm finished eating my meal, I expect a scrumptious dessert. Then, after dinner, you are going to draw me my bath so I can relax. And when I'm finished with my bath, guess who's going to dress me and comb my hair? His wife replies, 'the funeral director would be my guess'