Here is a page of our free, clean but funny wedding jokes.  The first section are one liners while the second section are short stories, at the bottom  are funny pictures of weddings.  Research your MC* wedding speech or just enjoy the best of Will and Guy's wedding jokes.

* MC Master of ceremonies, also know as the Emcee.

At the wedding reception, the photographer yelled, 'Would all the married
men, please stand next to the one person who has made your life worth
living.'

The bartender was almost crushed to death.

Wedding
One-liners by the Famous

The best way to get most husbands to do something is to suggest that perhaps they're too old to do it. (Ann Bancroft)

Keep your eyes wide open
before the wedding, half shut afterwards. (Benjamin Franklin)

A husband
is like a fire, he goes out when unattended. (Evan Esar)

My wife and I were happy for twenty years. Then we met. (Rodney Dangerfield)

water in the carburettor'. I said, 'Where's
the car?'
She said, 'In the lake'.
(Henny Youngman)

I love being married. It's so great to find that one special person you want
to annoy for the rest of your life. (Rita Rudner) 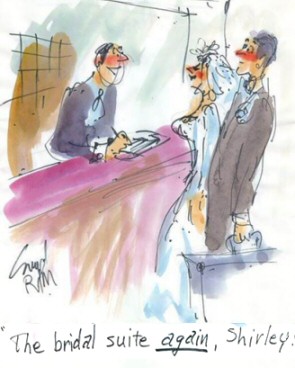 There's only one way to have a happy marriage, and as soon as I learn what it
is I'll get married again. (Clint Eastwood)

The secret of a happy marriage remains a secret. (Henny
Youngman)

Those Wanting to Be Married 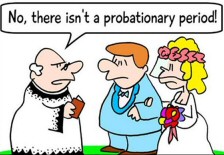 Father Henry was planning a wedding at the close of the morning service.  After the benediction Father Henry had planned to call the couple down to be married for a brief
ceremony before the congregation.  For the life of him, he couldn't think of the names of those who were to be married.

'Will those wanting to get married please come to the front?'  Father Henry requested.

Shotgun wedding - a case of wife or death.

A groom chose his pet dog as the best man for his wedding, reports the Metro.  Paul Nock told his new wife Kelly years ago that he wanted Scooby by his side on their big day.  The health and safety training
organiser, from Hull, said, 'I was away working in Dubai when the wedding arrangements were made and didn't think she would let it happen.  But when we got into the register office I turned round and there he
was walking up the aisle, with the rings tied around his neck.'  The 27-year-old bride added: 'It was a wonderful surprise.'

I would like to thank you all for coming here today to celebrate my daughter's
marriage.  Just for your information the seating arrangement has been
specially organised with all of the people that bought large presents being
placed towards the front and those that bought cheaper smaller presents at the
back.  (Pause)

There is a special thanks for uncle Fred who is at the back for the oven
glove.  (Pause)

The bride would like to ask uncle Fred if she could have the other glove for
their Silver Wedding Anniversary.

An
awesome pearl wedding dress is an excellent choice to compliment your
precious diamond engagement ring.

Jacob, age 92, and Rebecca, age 89, living in Devon , are all excited
about their decision to get married. They go for a stroll to discuss the
wedding, and on the way they pass a chemists. Jacob suggests they go in.

Jacob addresses the man behind the counter: "Are you the owner?"
The chemist answers, "Yes."

Jacob: "We're about to get married. Do you sell heart medication?"
Chemist: "Of course we do."

Jacob: "Everything for heartburn and indigestion?"
Chemist: "We sure do."

Jacob: "You sell wheelchairs and walkers and canes?"
Chemist: "All speeds and sizes."

What Kind of Wedding Do You Want, My love?

'I dreamed of a wedding of elaborate elegance,
A church filled with
family and friends.
I asked him what kind of a wedding he wished for,
He said one that would make me his wife.'

If you are making a wedding toast, here are ideas to get your creative
juices flowing.  In fact, if you don't have to make a wedding toast
then you can really let your imagination run wild.

After his husband forgot the wedding anniversary, his wife tells him:
'You'd better have something in front of the house, tomorrow, which goes
from 0 to 100 in 4 seconds.'

The next day, she finds on the road, a bathroom scale.

Married for many years, Paul had been ignored by his wife, Liz, for some
days, so eventually he confronted her with what he perceived as the problem.

'Come on Liz, admit it,' he ranted, 'You only married me because my granddad
left me $6 million, didn't you?'

'You really are silly, Paul,' retorted Liz loudly, 'I couldn't care less who
left it to you.'

How Well Do You Know Your Partner?

Relationships can be very puzzling as we all know. Take celibacy, for
example; this can be a choice, or a condition imposed by environmental factors.

While attending a special Marriage Awareness Weekend in Doncaster, Yorkshire,
England, Nicky and Victoria listened to the facilitator intone, 'It is so very
important that husbands and wives know the things that are important to each
other.'

He turned to the men and asked, 'Can you each name your wife's favourite
flower?'

Nicky leaned over, touched Victoria's arm gently and whispered, 'Self
raising, isn't it?'

On the
day of the nuptuals, everything went well. Nevertheless, Luke thought that everyone must have seen his toupee.  Next day, his youngest daughter sees his worried look and says, 'What's the matter, daddy? Why are you
looking so down in the mouth so?'

'I'm not really sad, darling,' Luke replies, 'it's just that I'm sure everyone yesterday saw that I was wearing a wig.'

Nellie Morgan and John Rees were married on February 2nd in Newtown's
Baptist church.  So ends a friendship that began in their school days.

Care for Your Mother-in-law

The man thought about it and told him he would just have her shipped home.

The undertaker asked, 'Why would you spend £5,000 to ship your
mother-in-law home, when it would be wonderful to have her buried here and spend only £150?'

The man replied, 'a man died here 2,000 years ago, was buried here, and three days later he rose from the dead.
I just can't
take that chance.'

In the morning the day after my nuptials, the phone rang. 'Reverse charges call from Jackie', said the operator'. 'Will you accept the charges?'

I couldn't
think of anyone that I knew who was called
Jackie; so I said no and put down the phone.

John wants to get his beautiful wife, Emma, something nice for their first
wedding anniversary.  So he decides to buy her a mobile telephone.  Emma is excited, she loves her phone.  John shows her and explains to her all the different and varied features on the phone.

On Monday Emma goes shopping in the local supermarket. Her phone rings and it's
her husband, 'Hi ya, Emma, 'he says, 'how do you like your new phone?'
Emma replies, 'I just love it, it's
so small and light and your
voice is clear as a bell, but there's
one feature that I really don't
understand though.'

'What's
that, Emma?'
asks the husband.

'How did you know that I was at Wal-Mart?'

Why do couples hold hands during their wedding?
It's a formality just
like two boxers shaking hands before the fight begins!

More Tales the MC
could NOT Tell in a Wedding Speech

A couple goes out to dinner to celebrate their 50th wedding anniversary.  On the way home, she notices a tear in his eye and asks if he's getting sentimental because
they're celebrating 50 wonderful years together. He replies, 'No, I was thinking about the time before
our nuptuals. Your father threatened me with a shotgun and said he'd have me thrown in jail for 50 years
if I didn't
marry you.  Tomorrow I would've been a free man!'

'Aye, it's going to be grand,' said Jim. 'I've got everything organised
already, the flowers, the church, the cars, the reception, the rings, the
minister, even ma stag night.'

'Heavens, I've even got a kilt to be married in,' continued Jim with a
look of satisfaction.

'A kilt... that's guid. You'll look smart in that,' exclaimed Finlay,
'and what's the tartan?'

Bride Was a Picture

A Texan woman had a wedding cake made into a life-sized model of herself.
Chidi Ogbuta, 35, had the 5ft cake made to renew her vows after 10 years of
marriage to husband Innocent.

It needed four men to lift it into the wedding venue.