Here is a page of our, clean short jokes and one-liners. As usual, we aim for a variety of tales and tall stories - something funny for every mood. Comedy is simply a funny way of being serious. Peter Ustinov

Policeman: Can you give me a description of your missing bank teller? Bank Manager: She's about five foot tall and $250,000 short.

Two men from Ireland were Talking in a Pub

'I wouldn't go to America if you paid me,' said Michael. 'Why is that?' asked the Patrick. 'Well for one thing, they all drive on the right hand side of the road there.' 'And what's wrong with that?' inquired Patrick. 'Well', said Michael, 'I tried it driving in Dublin the other day and it's terrible.'

The Vicar is Buying a Parrot

'Now, you're sure it doesn't scream, yell, or swear?' he inquired. 'Oh absolutely.  It's a religious parrot,' the storekeeper assures him.  'Do you see those strings on his legs? When you pull the right one, he recites the Lord's Prayer, and when you pull on the left he recites the 23rd Psalm.' 'Brilliant. Wonderful!' grins the Vicar, 'but what happens if I pull both strings?' 'I fall off my perch, you twit!' screeches the parrot.

Customer Bowled Over by Service

A car mechanic received a repair order that said to check for a clanking noise when going around corners so he took the car out for a test drive and made a right turn, then a left turn, each time hearing a loud clunk. When he arrived back at the garage he returned the car to the service manager with this note: 'Removed bowling ball from trunk.'

I got in a fight with my wife last night and it was totally my fault. She asked me what was on the TV and I said: dust.

Didn't go too well after that.

Mark, our five-year-old grandson, couldn't wait to tell his grandfather about the film we had watched on television, "20,000 Leagues Under the Sea." The scenes with the submarine and the giant octopus had kept him wide-eyed. In the middle of the telling, my husband interrupted Mark, 'What caused the submarine to sink?' With a look of incredulity Mark replied, 'Grandpa, it was the 20,000 leaks!'

Sadly the milkman like the coalman and travelling butcher is dying out, so Will and Guy are pleased to have preserved these notes left for milkmen.

'You should be ashamed,' the father told his son, Andy, 'When Abraham Lincoln was your age, he used to walk ten miles every day to get to school.' 'Really?' Andy responded. 'Well, when he was your age, he was president.'

A boss asked one of his employees, 'Do you believe in life after death?' 'Yes, sir,' replied the new employee. 'I thought you would,' said the boss. 'Yesterday after you left to go to your brother's funeral, he stopped by to see you.'

Draw a Picture of Mummy at Work 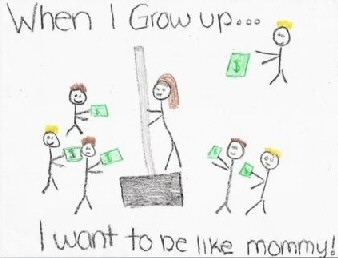 Here is a copy of Mummy's note, the next day, for the teacher: Dear Miss Greenwood, That is not a dance pole on stage in a dancing club. I work at Wal Mart and that's me selling a shovel. Yours faithfully, Sarah Fogarty.

Sally, a teenager, had been talking on the phone for almost ½ an hour and then she hung up. 'Crikey!' responded her father, 'That was short, darling, you usually talk for 2 hours or more. What happened?' 'Oh,' smiled Sally, 'It was a wrong number.'

Youth is Wasted on The Young?

Elsie, a grandmother was telling her little granddaughter, Hannah, what her own childhood was like, 'We used to skate outside on a pond. I had a swing made from a tyre; it hung from a tree in our front yard. We rode our pony. We picked wild raspberries in the woods,' opined Elsie. Hannah was wide-eyed, taking this in. At last she said, 'I sure wish I'd gotten to know you sooner, Grandma!'

I didn't know if my granddaughter, Rachael, had learned her colours yet, so I decided to test her. I would point out something and ask what colour it was. Rachael would tell me, and always she was correct. But it was fun for me, so I continued. At last she headed for the door, saying sagely, 'Grandma, I think you should try to figure out some of these yourself!'

The prospective son-in-law was asked by his girl friend's father, 'Son, are you able to support a family?' 'Well, no, sir,' he replied. 'I was just planning to support your daughter. The rest of you will have to fend for yourselves.'

Those Wanting To Be Married

Father Henry was planning a wedding at the close of the morning service. After the benediction Father Henry had planned to call the couple down to be married for a brief ceremony before the congregation.  For the life of him, he couldn't think of the names of those who were to be married. 'Will those wanting to get married please come to the front?'  Father Henry requested. Immediately; nine single ladies, three widows, four widowers, and six single men stepped to the front.

Footnotes: Please write to Will and Guy if you have any funny short jokes. Get your MC Wedding Joke book only $19.99