The secret is to start with a healthy pumpkin.  My Litmus test for a
good pumpkin is a
healthy stem, and a firm bottom.

What a lot of work went into creating these frightening pumpkin lights. 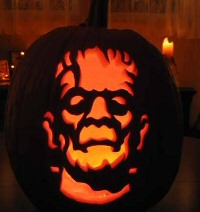 May Jack-o-lanterns burning bright
Of soft and golden hue
Pierce through the future's veil and show
What fate now holds for you. 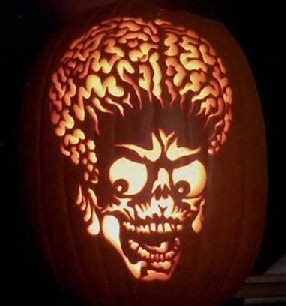 Are you able to determine the celebrity character shown by Will and Guy?
[above] These pumpkins have been carved by gardener David Finkle

Rather than carving out the traditional sinister smiles on his prized
fruit for Halloween, gardener David Finkle is busy carving out the faces of
his favourite stars for decorative "jack-o'-lanterns." David, 30, has carved
out the faces of X Factor judge Simon Cowell, glamour model Jordan and Prime
Minister, Gordon Brown on the fruits of his labours which grow on his small
holding in Chelmsford, Essex, England.

Pumpkin Ghost Rider
based on 'The Legend of Sleepy Hollow' 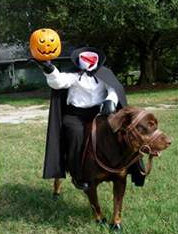 'The Legend of Sleepy Hollow' (1820) has spawned generations of headless
horseman with pumpkins at Halloween.  As you can imagine from the above
picture, the story tells of a suitor being killed by a headless horseman.

Before you cut the lid of the pumpkin visualise how to stop the lid
falling in later.  This means angling the edge of blade to get a cone
shape which bevels away from the middle.

Actually, a saw works better than a knife for removing the lid, cut
slowly and gently.

See how to make a Jack-o-Lantern

This was passed on to us by another pumpkin called Joe Muise.  We liked
this enough to send it to all the pumpkins in our patch.  Now it's your turn
to pass it to other pumpkins.

Here two
pumpkin stencils which you can print out, the pictures enlarge if you click on them. 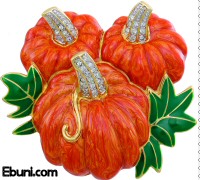 Crochet Mask
Here is a 'Sweet Satisfaction' crochet
pattern which is a skein-and-notion-holder, inspired by the sugar skulls
traditionally served for El Dìa de los Muertos.

Pumpkin Fashion Bag
45 free Halloween patterns that
you can knit or crochet such as this crochet pumpkin candy bag and the knit
skull candy bag.  See more on
Pumpkin fashion 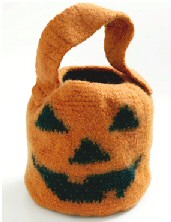