Podiatrists used to be called 'Chiropodists' especially in England.

Medical people who specialise in feet have a variety of names, chiropodist, podiatrist or foot doctor.

How Smart is Your Right Foot?

This is so frustrating! Give it a go This is so funny/weird that it will boggle your mind.  And if you are anywhere near as stubborn as I am, you will keep trying at least a few more times to see if you can outsmart your foot, but you can't. 1) While sitting at your desk, lift your right foot off the floor and make clockwise circles. 2) Now, while doing this, draw the number '6' in the air with your right hand. 3) Your foot will change direction. I told you so. And, there's nothing you can do about it! Go ahead: KEEP TRYING ALL YOU WANT. Have a great day. Now get back to work.

Out of the Mouths of Babes:

Greg, the three year old, put his shoes on by himself. His father, Barry, noticed that the left shoe was on the right foot and vice-versa. He sat Greg down on a chair and said quietly, 'Greg, your shoes are on the wrong feet.' He looked up at his father with a quizzical expression and replied, 'Don't mess me about, Dad, I know they're my feet.'

What's the condition called when all your toes go to sleep? Ans: Coma-toes! What do you call toes that smell? Ans: Hali-to-sis. Usually, our noses smell and use our feet to run. But, if you turn it around, it still makes sense:  Noses run and feet smell.

One evening after work John drove his secretary home after she was unable to start her car.  Not wanting to bother his wife, Maureen, he decided not to mention it to her. Later that night John and Maureen were driving out to eat when the John spotted a high-heeled shoe hidden under the passenger seat.  Pointing to something out the passenger window to distract his wife, he picked up the shoe and tossed it out of his window. They arrived at the restaurant a short time later and were about to get out of the car when Maureen enquired, 'John, have you seen my other shoe?'

Boots Are Made For Walking ... 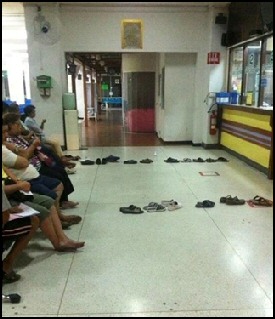 But shoes are made for queueing! [Kindly sent in by John Reeves]

I once heard a true story of a family firm who cornered the feet market.  One brother sold shoes, each shoe had a hidden fatal flaw.  As a direct result the victim's feet needed treatment with the second brother, who was the only podiatrist in town. Legend had it that the podiatrist was so incompetent that the only way the victim could get home was in a taxi.  You're ahead of me now, the third brother had the only taxi firm for miles around.
Stop Press ... Hospital is Sued by 7 Foot Doctors
Footnote! Please send us your funny podiatrist jokes and pictures