Why wasn't there any food left after the monster party? Cos everyone was a goblin

How To Enjoy a Family Halloween

Will and Guy offer these suggestions for a fun filled family celebration. These Halloween ideas are based on making your own fun and not relying on purchases from a supermarket.  These Halloween games for kids are based on an article written by Eleanor Bailey in The Guardian newspaper (UK). 1. Ugly Monster Beauty Contest The adults allow their faces to be "face painted" by the children. The uglier the better and then parade for the children to select the best. Old clothing could also be utilised as dressing up materials. Prizes could be on offer. 2. Telling Halloween Horror Stories in the Round This is regularly a vote winner with children above the age of 5 years. Sit the family in a circle in the dark. Have some starter sentences previously prepared in a witches hat in the centre, like: "A headless man entered the room.............." or "The wind howled and there was a knock at the door..................". In turn each player picks out a sentence and shining a torch in their own face begins the story and then passes the torch on. Listen to the howls of laughter as the story becomes more and more gruesome. 3. Ghoulish Laugh Competition Everyone in turn has to perform a hideous and maniacal laugh. Movement and facial expressions are important as well. 4. Unlucky Dip in a Bucket of Ghoulish Horror Place various items in a bucket. [peeled grape could be Nelson's eye; tin opener could be a medieval torture instrument; a carrot might be a witches finger, fruit pieces are useful here]. Encourage imagination and in turn allow the family to remove and object and invent or refer to a ghoulish story or an episode from history. 5. Food and Drink Make a "horror brew". Using an old bucket encourage the family to place in it all manner of horrific items; plastic spiders, stones, spit, old tea bags, cabbage leaves[bats' wings], old tights ripped [witches skin]. You, then go into the kitchen and close the door. Make horrible noises, wailing and turn on the blender to make them think you are mixing an evil brew. Emerge maniacally with the witches brew: some form of juice with green dye previously hidden in the fridge. Food may include cakes [see below]. Also young children could make sugar mice or spiced apple cake. Make a creamy pumpkin soup from the innards of your lantern.

Will and Guy ask, 'Why not bake a cake this Halloween?  Better still, make sure the kids have fun this Halloween and get them to bake it. Here are some classic examples to fire your imagination and for you to develop your own Halloween ideas.  You could show older kids how to decorate the cakes, and then leave the rest to their imagination and creative skills. 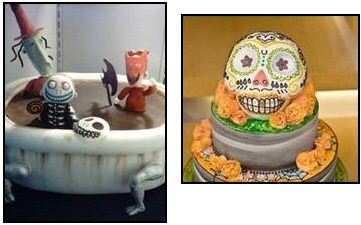 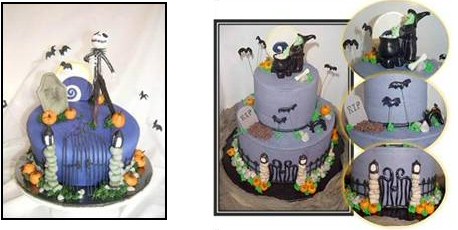 When a cake turns out 'wrong', it can be 'well bad', that means just right for a Halloween party! 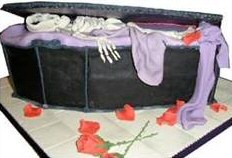 In my youth the main event at Halloween was not trick and treating, but bobbing for apples.  What we did was to try to catch one of the apples in a bowl of water using only our teeth. Our cousins played a variation whereby aunty hung the apples from strings so that they swung about and refused to be caught.  In both adaptations the player's hands were tied behind their back. You would think that apple bobbing was a game made for big mouths, yet my recollection is that the best player was always the quiet little girl, who managed to nip the stalk and then wrestle the apple from its string, or out of the water. Bobbing for apples probably has multiple origins.  The timing is such that there is an abundance of apples after the harvest, thus giving opportunity to experiment with apple games at Halloween.  In the middle ages witches were tortured on ducking stools, hence children could mimic this gruesome ceremony using apples as witches.  Witches often suffered a version of 'Morton's fork'.  When they were tied to the ducking stool and then held under the water, if they died of drowning, they were pronounced innocent.  Yet if they survived, then they must be guilty of witchcraft, and were promptly burnt at the stake. There are some who believe that bobbing for apples may be linked to an older Roman worship of Pomona the goddess of orchards. Apple bobbing - by Carolyn Wells You wouldn't believe On All Hallow Eve What lots of fun we can make, With apples to bob, And nuts on the hob, And a ring-and-thimble cake. 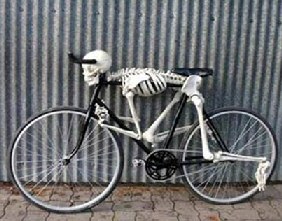 Think of the fun and game you could have on this bike.

Halloween Story for the Fireside

Bad Segeberg, Hamburg  - Germany Passengers on a train thought that a Halloween reveller, who was dressed up as zombie, was actually a murder victim.  They were alarmed because his hands and face were smeared with what looked like blood.  Because they suspected foul play, fellow passengers on the train called the police and also alerted the ambulance service. When paramedics arrived they soon realized that the 24-year old man was in a drunken slumber rather than dead.  A little later the police boarded the train, questioned man and asked him to remove his frightening make-up.  He was then allowed him to continue his train journey home. An official police spokeswoman said: 'Bad Segeberg is in a rural area and Halloween isn't very well known there; so people weren't expecting anyone to be dressed up in the train.' An un-attributed acquaintance said: 'I was on that train, and my friend looked just the same as normal. I don't understand why they called the police. Footnote: Please send us your ideas of funny Halloween games for kids