Here is Will and Guy's collection of amusing Thanksgiving pics and
cartoons.

Official collective noun: A Rafter of Turkeys
Will and Guy's assemblage: A Death-row of Turkeys

I'll let you into a secret, Will had to explain to me that the man was blind and that's why the turkeys were tricking him by saying 'Mooo'.  See more
thanksgiving turkey pictures.

However, from my Biology days I remembered that those red
protuberances on the male turkeys'
beaks are called snoods or wattles.

Joan D. Vinge says: In the land of the blind, the one-eyed
man is stoned to death. 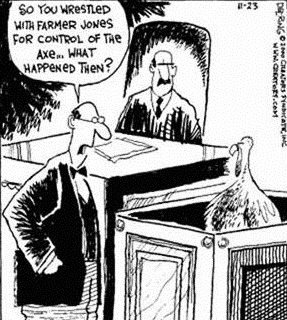 Could the above be a death-row of turkeys?

Asked to write a composition entitled, 'What I'm thankful for on
Thanksgiving,' one student wrote,
'I am grateful that I'm not a turkey.'

Amos, a hardworking turkey farmer
was experimenting with breeding turkey which would fetch more money.
Market research indicated that the turkey legs fetched the most money.  After
countless fruitless generations of turkeys, Amos finally cracked the
genetic code, and created a batch of four legged turkeys.  Just before
Thanksgiving Amos shared his success with his family.  'I finally did it! I bred a turkey that has
four legs!' Said Amos. 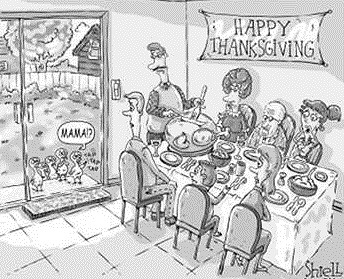 Cruising for a Bruising? 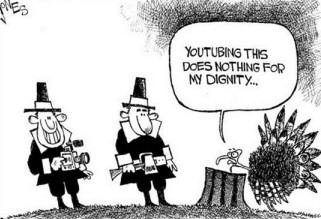 A woman called 1-800-322-4349 to find out how long it would take to roast
her Thanksgiving turkey. To answer the question, the Talk-Line home economist asked how
much the bird weighed.

How Were Turkeys So Named?

The word may have come from the noise a wild turkey makes when it become frightened: it sounds like 'turk - turc - turk.'

The original inhabitants of America called
this bird a 'firkee.'
It's not hard to see how firkee could become turkey.

Christopher
Columbus, the explorer, took some of the wild turkeys of North America back to Europe. People enjoyed eating the meat. It is possible that traders along the Mediterranean casts, known as Turkes, may have
brought some of these birds hence they came to be called 'turkey birds.'

In Spain, the turkey was often referred to as Indian fowl, an allusion which is repeated in the French 'dindon' formed with
d'Inde which means 'from India'. 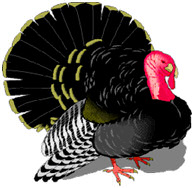 Some say Columbus thought the turkey was part of the peacock family. So he decided to call them 'tuka' which is the word for peacock in Tamil, a language spoken in
southern India and Sri Lanka.

Pulling the wishbone is a tradition of Thanksgiving.
Firstly, it's best to allow the wishbone to dry.  Then, two people each grasp one end of the wishbone.  After making a silent wish, they pull it away.  Whoever gets the
bigger portion with the joint, will get their prayer come true.  This is the same
wishbone tradition as at Christmas in the UK.