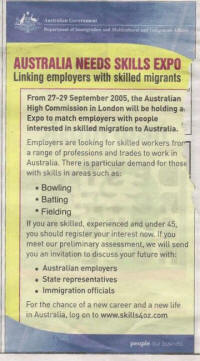 Mark Waugh was known as Afghanistan since he was often the forgotten Waugh; also he was
known as Audi after he got 4 ducks in a row which were recorded in the scorebook as 0000.

Steve Waugh, on the other hand was known as Tugga or Drobe.

Australian cricket lovers have often enjoyed taking the mickey out of the
Poms. During an Ashes Test at the Gabba in 1982, someone smuggled a piglet
on to the pitch with the names Botham and Eddie, a reference to Ian Botham
and Eddie Hemmings, two of the more stocky members of the touring side,
painted on its side.

Ashley Giles = King of Spain ( Ashley ordered several coffee mugs to be made to sell to raise money in his testimonial year. Apparently they were to have read '
The
King of Spin'
. They didn't
and the rest is history as they say)

Keith Fletcher = The Gnome of Essex

True story from 1976: BBC announcer - '
Its over to Brian Johnson and the latest Cricket from the Oval'
.

number 6 and he did not last long.)

Rahul Dravid = The Wall (Difficult to bowl at or get out)