Christmas is a time when everybody wants his past forgotten and his present remembered. 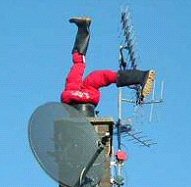 7 Christmas One Liners for Starters 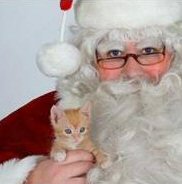 Q1: Mum, can I please have a cat for Christmas:
Ans: No.  You'll have turkey the same us the rest of us.

Q2: What's the most popular Christmas wine?
Ans: 'I don't like Brussels sprouts!'

Q3: How do chickens dance at the Christmas party?
Ans: Chick to chick!

Q4: Why would you invite a mushroom to a Christmas party?
Ans: He's a fun guy to be with.

Q5: What did the Spanish fireman call his twin sons?
Ans: Hose A, and Hose B.

Q6: Where do sheep get their hair cut?
Ans: At the baa baa shop.

Q7: What happened when the snowman annoyed the snow-woman?
Ans: She gave him the cold shoulder.

Footnote: Please send us your clean Christmas one liners.

Picture this, it was just before Christmas, and the magistrate was in a happy mood.  He asked the prisoner who was in the dock, 'What are you charged with?'

'That's no crime', said the magistrate. 'Just how early were you doing this shopping?'

Moira lost her handbag in the hustle and bustle of Christmas shopping in Oxford Street, London.

A small boy found it and he returned to her. Looking in her purse, Moira reasoned, 'Hmmm.... that's
strange.  When I lost my bag there was a £20 note in it.  Now there are four £5 notes.'

The boy quickly replied with a charming smile and in a cockney accent, 'That's right, madam. The last time I found a lady's purse, she didn't have any change for a reward.'
See more Christmas jokes for grown-ups.

Last Thursday morning 50 customers waited outside the Wal-Mart supermarket in West-Bend, Wisconsin, USA. They wanted to be the first to buy Sony PlayStation 3 game consoles as Christmas presents.
Unfortunately, the shop only had 10 consoles for sale. Simple maths suggests that 50 does not go into 10.

The assistant manager had a brain wave, a cunning plan, no less. He would organise a sort of musical chairs without the music. That is: he decided to put the 50 people in the shop car park; he then place 10 chairs just outside Wal-Mart's entrance, on a shout of 'go' the first ten to sit down would get the consoles on the Friday.

50 people stampeded towards the chairs, no hold barred. One man struck his head on a lamp post and had to go to
hospital, another bruised his head and knee badly.

However, the first 10 on the chairs got their PlayStation 3s.

What Scrooge would buy is a Christmas tree like the above.

Please Don't Show This Picture of Santa to the Kids

How do you know Santa has to be a man?
No woman would wear the same outfit year after year. 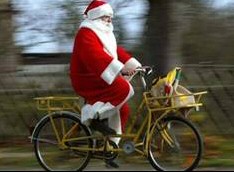 What A Girl Wants For Christmas

The Santa Claus at the shopping mall was very surprised when a Emily, young lady aged about 20 years old walked up and sat on his lap.  Now, we all know that Santa doesn't usually take requests from adults, but she smiled very nicely at him, so he asked her, 'What do you want for Christmas?'

'Something for my mother, please,' replied Emily sweetly.

'Something for your mother? Well, that's very loving and thoughtful of you,' smiled Santa. 'What do would you like me to bring her?'

Without turning a hair Emily answered quickly, 'A son-in-law.'

Saying a Prayer for His Christmas Meal

Lee, A seven-year-old boy, was asked to say thanks for the Christmas dinner.  The family members bowed their heads in expectation.  Lee
began his prayer, thanking God for his Mommy, Daddy, brothers, sister, Grandma, and all his aunts and uncles. Then he began to thank God for the food.

He gave thanks for the turkey, the stuffing, the Christmas pudding, even the cranberry sauce. Then lee paused, and everyone waited ... and waited. After a long silence, the young fellow looked up at his mother and asked, "If I thank God for the Brussels sprouts, won't he know that I'm lying?"

Footnote: We are always keen to publish more Christmas funnies, so do email them to us.