Here are true stories of the tragic sinking of the White Star's
liner, the Royal Mail Steamer (R.M.S) Titanic.

The Titanic Story - A Brief
History

RMS Titanic was a passenger liner that struck an iceberg on her maiden
voyage from Southampton, England, to New York City, and sank on 15th April
1912, resulting in the deaths of 1,517 people in one of the deadliest
peacetime maritime disasters in history. 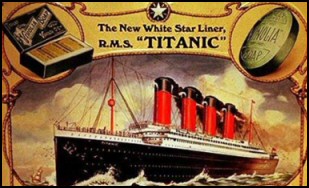 The largest passenger steamship in the world at the time, the
Olympic-class RMS Titanic was owned by the White Star Line and constructed
at the Harland and Wolff shipyard in Belfast, Ireland, UK.

The high casualty rate resulting from the sinking was due in part to the
fact that, although complying with the regulations of the time, the ship
carried lifeboats for only 1,178 people. A disproportionate number of men
died due to the 'women and children first' protocol that was enforced by the
ship's crew.

Will and Guy's Twenty Fascinating Facts and Titanic Trivia

Other Claims and Interesting Titanic Snippets

A further interesting morsel of information is that between
November 1911and April 1912, 20 other boats had sunk off the shores of
Newfoundland. 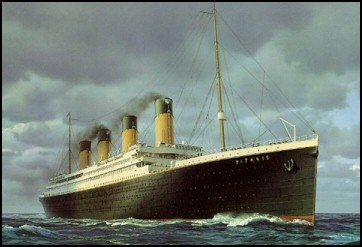 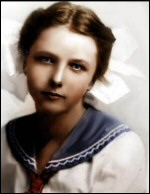 Ruth Elizabeth Becker, known later as Ruth Becker Blanchard, was
one of the youngest passengers on the Titanic at 12 years old, and until
relatively recently was one of the few remaining Titanic survivors. Her
story is harrowing, but it's inspirational that someone so young was able to
exhibit such bravery, even in the face of a horrific disaster that few of us
can truly picture in our minds.

The daughter of a Lutheran missionary, Ruth was born in Guntur, India in
1899. When her brother became ill, her mother Nellie decided to take him and
the rest of the family to Benton Harbour, Michigan for medical treatment.
Ruth, her mother, and her younger brother and sister boarded the RMS Titanic
as second-class passengers, with her father waiting behind in India to
rejoin them later.

Ruth and her family marvelled at the beauty and grandeur of the ship, but
their trip took a nasty turn when disaster struck. More specifically, the
Titanic struck an iceberg and began sinking rapidly.

Ruth's mother managed to get into Lifeboat No. 11 with her two youngest
children, but there was no room left for Ruth. Nellie sobbed as she was
separated from her daughter, who ended up in Lifeboat No. 13.

As Ruth's lifeboat was lowered into the water, it was very nearly crushed
by Lifeboat No. 15, which was being lowered too quickly. A crew member
managed to cut the ropes binding No. 13 to the ship at the last minute, and
the boat slid away in the nick of time. The air was filled with the
chilling sound of screams from those stranded in the icy water. A young
Polish woman in Ruth's lifeboat lamented her missing baby, who had been
separated from her much like Ruth had been separated from her family. Though
she didn't understand German, Ruth did her best to comfort the upset mother.

Finally, the lifeboat was rescued by the RMS Carpathia. After several
tense hours of waiting and dreading the worst, Ruth was overjoyed to see her
mother and siblings alive and well. She was also happy to discover that the
Polish woman from her lifeboat had been reunited with her baby.

Ruth refused to talk about the traumatic Titanic sinking incident for
many years. Later, she began to talk more about it, and made appearances at
Titanic Historical Society conventions along with other Titanic survivors.

In 1990, Ruth Becker Blanchard took a cruise to Mexico, her first time as
a passenger on a ship since the Titanic disaster. She died later that year
at the age of 90, and her ashes were scattered at sea, directly over the
Titanic wreck.

The Titanic Story of Violet Jessop

One of the most amazing stories of any Titanic survivors, Violet
Constance Jessop was an ocean liner stewardess and a nurse who survived the
sinking of both the RMS Titanic and the HMHS Britannic in 1912 and 1916.

Even more amazingly, she had been aboard the Britannic's other sister
ship the RMS Olympic when it nearly sank after colliding with the naval
vessel the HMS Hawke in 1911.

For more of this Titanic story see here:

'When the Titanic struck the iceberg, I was in bed. However, for whatever
reason I was awake and remember the jolt and cessation of motion. A steward
knocked on the stateroom door and directed us to get dressed, put on life
preservers and go to the boat deck, which we did. The steward as we passed
was trying to arouse passengers who had locked themselves in for the night.
Elevators were not running. We walked up to the boat deck. Al was calm and
orderly. An officer was in charge. 'Women and children first,' he said, as
he directed lifeboat number 11 to be filled. There were many tearful
farewells. We and Uncle Jim said good-bye.

The lowering of the lifeboat 70 feet to the sea was perilous. Davits,
ropes, nothing worked properly, so that first one end of the lifeboat was
tilted up and then far down. I think it was the only time I was scared.
Lifeboats pulled some distance away from the sinking Titanic, afraid of what
suction might do.  As row by row of the
porthole lights of the Titanic sank into the sea this was about all one
could see. When the Titanic upended to sink, all was blacked out until the
tons of machinery crashed to the bow.  As this happened hundreds and
hundreds of people were thrown into the sea. It isn't likely I shall ever
forget the screams of these people as they perished in water said to be 28
degrees.

At
this point in my life I was being brought up as a typical British kid. You
were not allowed to cry. You were a 'little man.' So as a cool kid I lay
down in the bottom of the lifeboat and went to sleep. When I awoke it was
broad daylight as we approached the Carpathia. Looking around over the
gunwale it seemed to me like the Arctic. Icebergs of huge size ringed the
horizon for 360 degrees.'

One of the most moving stories regarding the passengers on the Titanic
that Will and Guy have researched is the tale of an elderly wealthy couple,
the Straus'.

As it became apparent that no male passengers on the Titanic would be
allowed to board the limited lifeboats, Mrs Straus chose to stay by the side
of her husband; even though it meant certain death.

Sadly, the couple perished with the ship.

Footnote:
Please send us your take on the Titanic
true story.