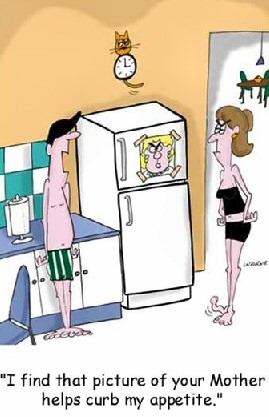 Behind every successful man stands a devoted wife, and a surprised
mother-in-law.

Will and Guy's
Favourite Mother-in-law Joke

Harry was
travelling down a country road in his native Yorkshire, England when he saw a large group of people outside a farmhouse.

It was a cold January afternoon, so he stopped and asked Farmer Giles why such a large crowd
of men was gathered there.

The
farmer replied, 'Eddie's
donkey kicked his mother-in-law and she died.'

'Well,' replied the man, 'She must have had a lot of friends.'

'Nope,' said Giles.'
We all just want to buy
his donkey.'

Give you all hope of peace so long as your mother-in-law is alive.

Overheard in a restaurant:
She: This wine is
described as full bodied and imposing with a nutty base, a sharp bite, and a
bitter aftertaste.
He: Are you describing the wine or
your mother?

Open Door Policy
The doorbell rang this morning. When
I opened the door, there was my mother-in-law on the front step.
She
said, 'Can I stay here for a few days?'  I said, 'Sure you can.' And shut the door
in her face.

Newlywed Surprise
The newlywed wife, Monica, said to
her husband , Nick, when he returned from work, 'I have great news for you.
Pretty soon we're going to be three in this house instead of two.'

Monica smiled and added, 'I'm glad that you feel that way, Nick, because
tomorrow morning my mother moves in with us.'

Final Complaint
Tomorrow it's the mother-in-law's
funeral...and she's cancelled it.

Paul: I was sorry to hear that your mother-in-law died. What was the
complaint?
Phil: We haven't had any yet.

The man thought about it and told him he would just have her shipped
home.

The undertaker asked, 'Why would you spend £5,000 to ship your
mother-in-law home, when it would be wonderful to have her buried here and
spend only £150?'

The man replied, 'a man died here 2,000 years ago, was buried here, and
three days later he rose from the dead. I just can't take that chance.'

Two women came before wise King Solomon, dragging between them a young
man. 'This young man agreed to marry my daughter,' said one.

'No! He agreed to marry MY daughter,' said the other. And so they haggled
before the King, until he called for silence.

'Bring me my biggest sword,' said Solomon, 'and I shall hew the young man
in half.  Each of you shall receive a half.'

'Sounds good to me,' said the first lady.
But the other woman said, 'Oh Sire, do not spill innocent blood. Let the
other woman's daughter marry him.'

The wise king did not hesitate a moment. 'This man must marry the first
lady's daughter,' he proclaimed.
'But she was willing to hew him in two!' exclaimed the king's court.

'Indeed,' said wise King Solomon. 'That shows she is the true
mother-in-law.'

God could not be everywhere and therefore he made mothers. - A Jewish
Proverb

Not A Mother-in-law
Joke, A True Story!

An unnamed Englishman man accidentally? left his aged mother-in-law in a
ferry port car park, while he and his wife took a day trip on the Dover to
Calais ferry.  However, they realised halfway across to France that the
mother-in-law was still in the back of the car.  Frankly, Will and Guy
blame the wife as much, if not more, than the poor son-in-law.

Port of Dover police received a call asking them to check vehicles in a
multi-storey car park for an abandoned old lady.  They duly found the
lady, and in true British style gave her a nice cup of tea.  When the
couple returned from Calais, in time honoured mother-in-law style she gave
them a piece of her mind.

"We all know about mothers-in-law and what a nightmare they can be but
this guy took it to the limit," a police source told reporters.  "He'll
never live this down and he'll be getting it in the ear from now until the
end of time. It was a nightmare for the old dear."

What Will and Guy like about this Mother-in-law saga is that fact is
always stranger than fiction.  Furthermore, it is true stories, such as
this, that act as seeds for all the related jokes.

My mother-in-law caused an argument in a pub and half a dozen men set
upon her and dragged her to the floor, screaming.  The barman
turned to Les and asked "Aren't you going to help?" "Nah!" says Les,
"Six should be enough!"

[Kindly sent in by Trevor Warland]

Mrs Ravioli comes to visit her son Rocco for dinner; he lives with a
female roommate, Maria.  During the course of the meal, his mother
couldn't help but notice how pretty Rocco's roommate is.

As the evening went on, MaMa watched the two interact and started to
wonder if there was more between Rocco and his roommate than met the eye.
Reading his mom's thoughts, Rocco volunteered, "I know what you must be
thinking, but I assure you, Maria and I are just roommates.''

About a week later, Maria came to Rocco saying, "Ever since your mother
came to dinner, I've been unable to find the silver sugar bowl. You don't
suppose she took it, do you?"

"Well, I doubt it, but I'll email her, just to be sure." So Rocco sat
down and wrote this email:

.... Several days later, Rocco received this response from his MaMa:

[Footnote, thanks to Joy for sending in this joke] 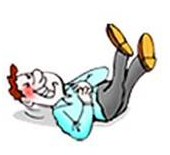 Psychic Mother in law
When Roger came home, his wife, Norma, was crying. 'Your mother insulted
me,' she sobbed.

'My mother?' spluttered Roger, 'How could she do that
when she is on holiday on the other side of the world?'

'I know.' Norma
gulped, 'But this morning a letter addressed to you arrived. I opened it
because I was curious.'

'At the end of the letter it was
written:
Dear Norma , When you have finished reading this letter, don't
forget to give it to my son, Roger.'

Murphy's Law?  No.  Mother in law's Choice
Alexis, a young man, excitedly tells his mother he's fallen in love and
that he is going to get married.  He tells her, 'Ma, I'm going to bring
over 3 women and you must try and guess which one I'm going to marry.'

The next day, he brings three beautiful women into the house and sits
them down on the couch and they chat for a while. Later, he says, 'Okay Mother dear, guess which one I'm going to marry.'

She immediately replies, 'The one on the right.'

'That's amazing, Ma. You're correct. How did you know?'

My mother-in-law and I were happy for 20 years.
Then we met each other.

Unwanted Gift
A constantly nagged and harried husband decided to buy his mother-in-law
a cemetery plot as a Christmas gift.

The next year Christmas came again and this year he didn't buy her any
present.

His mother-in-law was upset and asked the son-in-law why was she
forgotten this time.

The angry son-in-law responded, 'Well, you still haven't used the gift I
bought you last year.'

Help Mother in Law
Louise, a young wife came home one day and found her mother standing in a
bucket of water with her finger stuck in the light socket.

Ian, her young husband was standing by the switch.

'Hello, darling,' greeted the mother, 'Ian has had this marvellous idea
for curing my rheumatism.'

MOTHER-IN-LAW:
When you rearrange her letters you get:
WOMAN HITLER

Footnote:
Please send us your funny mother in law
jokes.