Actually, that looks like a genuine 1909 Rio Grande Pullman in the
background.

Indian Express Train - Only half full

Patrick and Fergus were rather drunk one Sunday evening after a
session in the pub and were stumbling home along the railway tracks which
led to their homes.

Patrick turns to Fergus and slurs, 'There's a hell of a lot of steps
here.'

Fergus looks up and replies, 'I'll tell you what's worse, Patrick, this
hand rail is very low down.'

Here above is a picture showing the train's electric pickup and the
fancy train graffiti underneath.

Vera was in court charged with parking her car in a restricted area on
the railway station forecourt.

The judge asked if she had anything to say in her defence.

Vera answered frostily, 'They shouldn't put up such misleading notices.
It said "FINE FOR PARKING HERE".'

Meanwhile, these people are the ultimate optimists if they think their
train will stop here.

On closer inspection, it would be a major surprise if the train travels
on this track at all.

Train in The Garage? 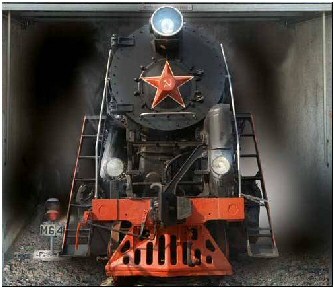 We have discovered that a German firm called "Style Your Garage", creates
posters for garage doors that make it look as if it's actually showing the
interior of your garage, and what's in it - a train!

We wondered, why the motorist above has pulled over.  This could be the
reason, here come the road trains three abreast.