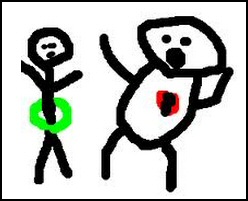 Funny syndrome as in amusing, and also funny as in peculiar.

In China, 21 years ago, Xu Denghai was admitted to a Beijing hospital
with a twisted intestine caused by an excessive amount of time spent on his
hula hooping hobby.
The name was adopted and health warnings issued to
other gyrating hula hoop fans that they must warm up properly before
beginning - and make sure they never did it on a full stomach.

Taking its name from the title character in Stanley Kubrick's epic 1964
black comedy movie - a crazed weapons specialists who would jerk his hand up
involuntarily at the most awkward moments, it's another name for Alien Hand
Syndrome, the neurological condition in which a patient's hand or arm jerks
out of control, often doing the exact opposite of what is expected.

Just like Alice's magical 'drink me' potion, sufferers perceiving a
bizarre growth in body parts, or the body as a whole.

In rare cases the patient may even think their body, or parts of it, are
actually shrinking. As well as distorting the perception of objects, the
syndrome can also distort time, sound, touch and make the ground feel
sponge-like. 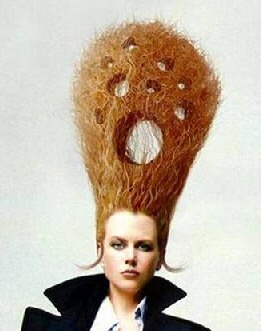 This sounds like a childhood excuse, but is a genuine medical phenomenon.

UHS was first diagnosed in France and can begin in childhood or occur
suddenly in later life. The hair is often incredibly fine, leading to the
nickname, 'spun-glass syndrome', and although it can be clean, knot free and
kink free, the hair cannot be combed into any kind of order.  See more
on 'Bad Hair Days'.

The patient believes there are loud noises - like bomb explosions, gun
fire, or cymbals crashing, but they are only happening inside their own
head.
The symptoms usually occur as an individual is falling asleep, or
has been asleep an hour or two.

Sometimes the sounds can be accompanied by the perception of bright
flashes and, understandably, can cause the patient extreme shock and
anxiety.

A disorder which makes a sufferer believe that a friend, partner, parent
or other loved one has been replaced with an identical imposter.

Named after Joseph Capgras, a French psychiatrist who first described the
disorder in 1923, the condition can be short or long term and even disturb
the perception of time itself.

One of the most bizarre and rare neurological conditions, F A S is
thought to be the result of damage to part of the speech centre of the
brain.

Florida woman Tiffany Roberts recovered from a stroke and could only
speak in a stiff English accent, and started using very English terms such
as 'loo', despite never having been to England or having known many English
people.

Karen Butler, a 56-year-old tax consultant from Toledo, Oregon, suffered
from FAS after dental surgery - her American twang transforming into a broad
Australian accent.
There have been approximately 60 recorded cases around
the world, which have included Japanese to Korean, English to French and
Spanish to Hungarian.

This weird condition was noted as far back as 1786. Sufferers generate
electric charges capable of shorting electronic equipment or causing lights
to explode.

One recorded example of this was French girl Angelique Cotton, from
Finistere in Brittany, who was said to have been able to generate massive
static electricity which could attract or repel objects.

This rare disorder sees people hold a delusional belief that they are
dead or do not exist. In some cases they believe they are literally rotting
away or have lost their blood or internal organs.

Also known as 'Cotard delusion', in rare instances, it can even have the
reverse effect and prompt delusions of immortality. 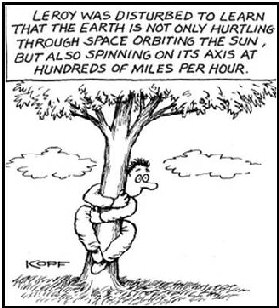 Not So Funny Syndrome: Chronic Lateness

Jim has been late for everything - late for work, late for football
matches, late for holidays. He's left women stood waiting on a first date,
turned up to meals with friends hours after he should have and even arrived
for funerals long after they've begun. But now his poor timekeeping has been
diagnosed as a medical condition - Chronic Lateness Syndrome.

His family still don't believe him. They think he's just making excuses.
But Jim says that knowing it's a real condition and that it's not his fault
has really helped him.

Please send us your funny syndromes.