Doreen, aged 79, finished all the shopping on her weekly list at Walmart supermarket. She walked determinedly towards her car which she had left in the car park. There she saw four youths about to drive away
in her car. Doreen became agitated and dropping her shopping to the ground, she drew a handgun from her bag and screamed as loud as her lungs would allow at the four miscreants, 'I have a gun and I know how to
use it. Get out of the car you horrible little men.'

The four lads didn't
wait around for a second invitation but got out and ran helter-skelter as far away as they could, whereupon Doreen, somewhat shaken,
proceeded to load her shopping bags into the back of the car and get into the driver's
seat. As hard as Doreen tried she could not get her key into the ignition. Then it began to dawn on her why.

She came
across her own car a few moments later in another row near by. Putting her bags now, into her own car, she drove hesitantly to the nearest Police Station. As Patricia was recounting the tale to the Duty
Sergeant she wondered why he kept giggling and smiling. Eventually he pointed to the end of the counter where dear old dizzy Doreen saw four young lads, faces extremely pale, who were describing how a little
old lady, some 5 foot tall, wearing glasses and with grey hair had stolen their car by waving a gun at them.

Doreen was not charged with anything.

See Grammy Gordon for another true story - or urban myth 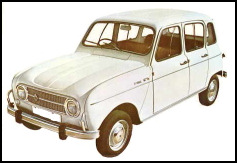 My friend Dave's
Mother-in-law lent him her
Renault 4 for a week.  The 1980's
car was the Mother-in-laws pride and joy.  Well, Dave and I borrowed the car and went out for a night on the town.  When we returned to the car park in the early
hours of the morning, we were unsure where we parked the car.  But eventually we spotted the white Renault in a dark corner.

Now these old Renault 4 had a bizarre column gear
change.  Dave told me how he spent half the afternoon perfecting the gear change sequences.  Anyway, now he just could not get the car into first gear.  I chipped in '
any gear will do Dave, try
second'
.  But Dave would not have it; he doggedly went through the sequence that he had learnt for first gear.

I knew Dave well, and there was no point is arguing with him, so I just twiddled
my thumbs and looked around the car.  'Dave' I said, 'What are all these cups doing on the back seat?'
Dave, what's
all this curtain material on the floor?'
At that point we simultaneously
looked out of the window and saw another Renault 4 parked next to us.  Without a word we got out and into the other car.

As luck would have it, the Mother-in-laws model was a year older than the
other Renault, we later learnt that during that time, Renault changed the column change gear layout.  Also, in case you are wondering, in those days it was not unknown for one car's
key to fit another, but
I still say were lucky that the Mother-in-laws key started the other car's
engine.

In my more mischievous mood, I wonder what would have happened if Dave and I had drive off in the wrong Renault.  I
would have paid good money to see the confrontation when the Mother-in-law realized that she had the wrong car.  Incidentally, neither Dave and I are great on colours and it was dark.  On closer
inspections one was an ivory white and the other more of a cream or even buttercup yellow - to us one white Renault was as good or as bad as another.

Footnote:
Please send us your true stories and urban myths.
For example, Susie S sent us this true story:

We were going hostelling with a mate. He'd driven in his red mini,
we'd caught the train. Quite near the hostel we saw the red mini and thought
wouldn't it be funny to move it round the corner (yeah well physicists have
limited access to real humour!). The 6 of us picked up the mini and were
just about to stagger round the corner with it when a very angry chap lent
out of his upstairs window and asked what the **** we were doing with his
car. Sheepishly we put the car down and carried on our way to see another
red mini containing our friend grinning his socks off!!!