New road signs are springing up, which take into account gender differences.  So far, they are only experimental. 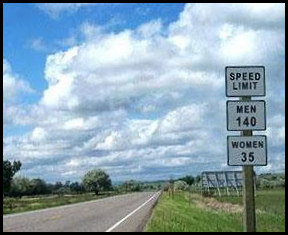 A State Police Officer was waiting on the side of the highway when he spotted a car creeping along at 22 MPH. "That driver is just as dangerous as a speeder!" he says to his partner.  Lets turn on the blues and pull over the driver. Approaching the car, he sees five old ladies inside - two in the front seat and three in the back, and they're wide-eyed and white as ghosts. The driver, obviously confused, says to him, "Officer, I don't understand, I was doing exactly the speed limit! What seems to be the problem?" "Ma'am," the officer replies, "You weren't speeding, but you should know that driving slower than the speed limit can also be a danger to other drivers." "Slower than the speed limit? No sir, I was doing the speed limit exactly. Twenty two miles an hour!" the old woman says a bit proudly. "Look, the sign is right there!" The State Police officer looks around and there is a "22" sign. The officer chuckles to himself. "That's the route number, not the speed limit," he explains, still amused. "Oh," the woman says, a little embarrassed. "Thanks for pointing that out." She grins, sheepishly. "Sure thing," the officer says. He then adds, "But before I let you go, Ma'am, I have to ask. Is everyone in this car OK? They seem awfully shaken up and they haven't muttered a single peep this whole time." "Oh, they'll be alright in a minute officer," the woman answers. "They just need to calm down. You see, officer, we just got off Route 119."

Confusion in Any Language 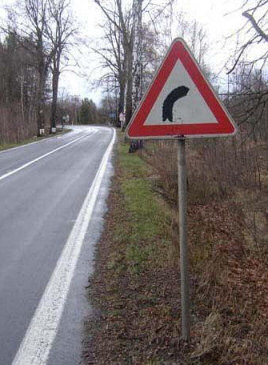 In Aspen, Colorado the mayor is planning to cut the town's speed limit to 14 mph. His reason? "You need a weird number to get motorists' attention."

Which Days?  What Time? What Speed?  (See right) Sign spotted in the USA - we hope you can read and understand it as you drive past. We have learned that this sign has since been replaced by a more easily readable version. If you have spotted the new sign please send us a photograph.

Motorists made insurance claims last year for everything from a frozen squirrel crashing through a car windscreen to a cow jumping on a quad bike, it was revealed last week in The Scotsman newspaper. Freak incidents involving animals topped the list of the most bizarre claims made to insurer Norwich Union in 2005, with food-related prangs in second place. One unlucky driver claimed to be unable to slow down because a potato was lodged behind the brake pedal, while another said a passing vehicle was damaged by a frozen kebab which flew out of an open car door. Sally Leeman, of Norwich Union, said: 'We see a lot of strange claims but we were surprised at how many involved animals and food, of all things.' Footnote: Please send us your funny speed limit pictures.