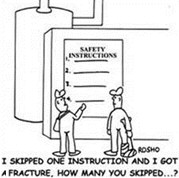 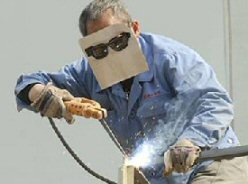 Blink And You Will Miss It!

From page 21 of the Health & Safety Handbook for Employees:
'Blink your eyelids periodically to lubricate your eyes'.

Interestingly, Will and Guy have been researching Health and Safety in
relation to business and work places.  We are aware that intrinsically it is
not a very interesting topic therefore it becomes essential, we think, to
mix the serious message with humour. 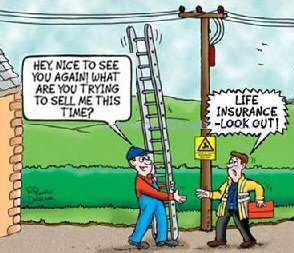 The fact that in the UK over a *million workers get injured every year
and 25,000 people are forced to give up work because of injury or illness
caused by work shows that employers are very much taking risks with their
workers' health. Most of these injuries could have been avoided if employers
had implemented proper safety procedures, but research has shown that around
half of employers have not even done a simple risk assessment which is, in
fact, a legal requirement.

We are aware that our site pages are towards the top of peoples' choices
to view. Why not, therefore, use our findings, stories, pictures, posters
and articles in your induction courses and indeed in your Health and Safety
programmes. Research indicates that the following three ideas are proven to
be successful in communicating to a workforce about Health and Safety.

We have found that people remember 50% more in what they see than in what
they hear.

Visuals get people's attention. Advertising people know about this. The
many images on billboards, magazines, newspapers or even on the internet are
testimonies that visuals do attract people and advertising using visuals are
so effective. 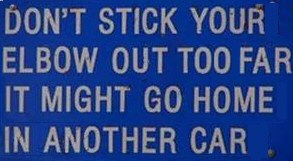 Humour In Safety Posters Brings Good Feelings To a Workplace

This makes ideas more memorable and able to be understood.  This has a lot
to do with the working of the mind.  Pleasant thoughts generate more
receptive learning.  Have you ever tried studying for an exam when you have
ugly thoughts disturbing your mind Humour effectively drives a point
home.

Therefore it becomes easier to understand when done correctly. Accidents
situations cannot be photographed. Only stuntmen are crazy enough to do
things that can result in accidents.  Therefore, cartoons can be effectively used to
illustrate dangerous situations which might be impossible to capture on film
in real life.

A Funny Tale of Two Workmen

Two workmen, Harry and Reggie, were digging foundations when Harry
started shouting and jumping about. 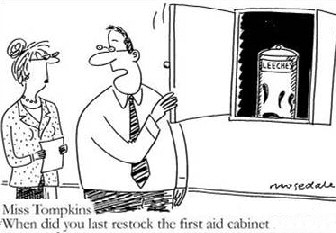 Reggie thought his partner had hit an underground power cable and was
being electrocuted so following good health and safety practice used a
shovel to separate him from the electricity.

In fact Harry wasn't getting an electric shock but was panicking after a
wasp had flown up his trousers.  Luckily Harry didn't get stung but Reggie
hit him so hard with the shovel that his shoulder was dislocated.

In fact Harry wasn't getting an electric shock but was panicking after a
wasp had flown up his trousers.  Luckily Harry didn't get stung but Reggie
hit him so hard with the shovel that his shoulder was dislocated. 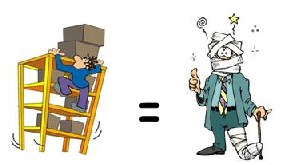 Will and Guy's Selection of funny health and safety tips at the
workplace.

The Famous poetic song the 'Sick Note', is also known as Murphy and the
Bricks.

It was written by Pat Cooksey who says that the original song dates back
to the English Music Hall's of the 1920's and was printed in the Readers
Digest in 1937 in the form of a story.

The song is unique in as much as it appears under a galaxy of titles but
is always the same song. It has worldwide popularity with over 100
recordings to date.

Murphy And The Bricks

Was heavier than me

The barrel now being heavier
It started down once more
And landed
right across me
As I lay there on the floor
It broke three ribs and my
left arm
And I can only say
I hope you'll understand
Why I am not
at work today !

Once, an engineer, a physicist and a safety officer all applied for the
same job.

The Managing Director interviewed all three, and thought all were
excellent. He had to think of some way to find the best person. So he told
them all to come back the next day and tell him the exact height of the
building. The one who was closest would get the job.

The physicist went to the top of the building, and dropped iron balls to
the ground, and had his friend timed the balls. He did this several times.

The engineer got out a sextant, and computed ratios of a yardstick to the
building.

The next day, the manager asks all three of them to tell how tall the
building is.

'My Goodness, said the MD, 'the safety officer got it exactly correct.
How did you manage that?'

'Well', said the safety officer, 'I went down to the planning department
and looked up the height in the building records.'