Here are a collection of yarns to amuse bell ringers.

Quasimodo was the famous hunch back of Notre Dame.  After his death, the bishop of his Cathedral sent word through the streets of Paris that he needed a new bell ringer.

The Bishop decided that he would conduct the interviews
personally and so he went up into the belfry to begin the screening process. After observing several applicants demonstrate their skills, he shook his head - none were as good as Quasimodo.

Just as the
bishop was leaving, a man with no arms approached him
and announced that he was there to apply for the bell ringer's
job.

The bishop was incredulous. 'But, you have no arms!'

'No matter', said the man. 'Observe!'
And he began striking the bells with his face,
producing a beautiful melody on the bells.  The bishop listened in astonishment; convinced he had finally found a replacement for Quasimodo

But suddenly, rushing forward to head the bell, the armless
man tripped and plunged headlong out of the belfry window.  Sadly, he died on the the street below.

The stunned bishop rushed to the armless man. When he reached the street, a crowd had gathered around the fallen figure,
drawn by the beautiful music they had heard only moments before.

As they silently parted to let the bishop through, one of them asked, 'Bishop, who was this man?'
. 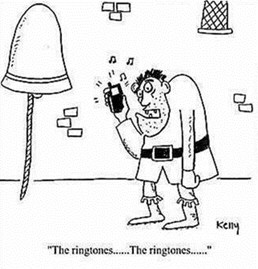 'I don't
know his name', the bishop sadly replied, 'but his face rings a bell.'

The next day, despite the sadness of the unfortunate death of the armless campanologist,
the bishop continued his interviews for the bell ringer of Notre Dame.

The first man to approach him said, 'Your Excellency, I am the brother of the poor armless wretch that fell to his death from this very
belfry yesterday. I pray that you will honour my brother's
life by allowing me to replace him as your esteemed bell ringer'.

The bishop agreed to give the man an audition and, as the armless man's
brother stooped to pick up a
mallet to strike the first bell, he groaned, clutched at his chest, twirled around, and died on the spot.

A monk, hearing the bishop's
cries of grief at this second tragedy, rushed up the stairs to his
side. 'What has happened? Who is this man?'
the monk asked breathlessly.

'I don't
know his name', sighed the distraught bishop, but...

A True Story of Campanology

A drunk man who fell asleep and got trapped inside a church rang out SOS
in Morse code with the bell. When the man awoke in St Faith's Church in
Havant, near Portsmouth, he found the doors locked. Reportedly worried about
ghosts, he started ringing out the Morse code for SOS on the church bell,
reports Portsmouth Today.

As dusk began to fall, he was still ringing for his life but eventually a
local resident realised something was wrong. He alerted two Police Community
Support Officers who, in turn, contacted church verger Vicki Mockford who
came to the rescue. She said, 'I was called by police saying someone was
using the bell as a sign they were trapped. When we found him inside he told
us he went into the church to have a sit down but fell asleep. He told the
police he had been drinking which may have made him a bit dozy. He looked
quite embarrassed about the whole incident when we found him. Maybe after
this he might consider taking up bell ringing as a hobby.'

There is evidence that William Tell and his family, as well as great bowmen were also avid bowlers.  Unfortunately, all the league records were destroyed in a fire. Thus, we'll sadly never know:  for
whom the Tells bowled.

(O.K, you try saying: 'for whom the bells tolled'
after a few Gluweins, or what ever the Suisse drink.) 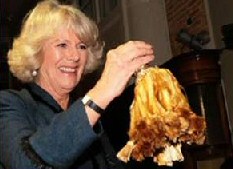 The Duchess of Cornwall's bid to turn on the Christmas lights at
Britain's oldest shopping arcade failed when a tassel came off in her
hand.

The Duchess, 62, was invited to illuminate London's exclusive
Burlington Arcade, which opened in 1819. After a countdown from shoppers,
she went to turn on the lights by pulling a rope with a large gold tassel,
and the tassel came off in her hand report Will and Guy.

The blunder was met with howls of laughter from the crowd of guests,
while the Duchess looked around sheepishly with a broad grin on her face.
The row of 19 geometric light sculptures which lined the arcade's roof
eventually lit up after a short delay to cheers from the crowd.

The embarrassment follows several other incidents in which the Duchess
has been left red-faced at opening ceremonies:

a) In 2007, the Duchess failed to smash the bottle of champagne at the
naming of the Queen Victoria cruise liner.
b) Early in 2009 she was
also reduced to laughter when she broke a plaque at an unveiling ceremony
for a homeless charity in Plymouth.