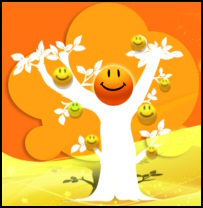 Most of us have cousins,  This is the day to try and remember all the
names of our parent's children.  When is this special Cousin's Day?  24th of
July.

A Russian cousin arrives in Seatle.

American cousin: How do you say 'Labor Day' in Russian?
Russian
cousin: Another freezing and snowy day. 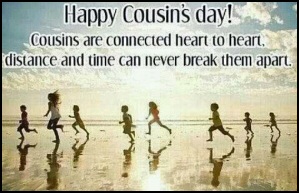 1st Cousins
The secret of understing cousin
relationships is to work back to the grandparents.  1st cousins share
the same grandparents, their parents are brothers or sisters (or brother and
sister).

2nd Cousins
Once you focus on the grandparents, then by
logical extension, 2nd cousins share the same great grandparents.

Cousins Removed Once and Twice 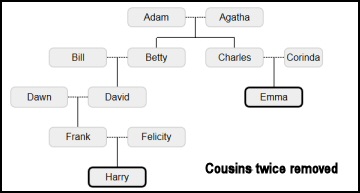 The key to removed cousins are generations.  Once removed refers to one
generation further down the tree.  If you take first cousins, then if
one cousin has a child then that cousin is one (generation) removed from a
cousin of its parents.

A cousin twice removed would refer to a gap of two generations.  By now
the relationship is best illustrated by a family tree.

It is still legal to marry one's 1st cousin in over 20 states in America,
and estimates suggest about 1 in 2,500 Americans marry their cousin.

In England it is still legal to marry a cousin.  Perhaps the most
famous instance of kissing cousins was Queen Victoria marrying Prince
Albert.  Talking of Queen Victoria, Queen Elizabeth and the Duke of
Edinburgh are both her great, great grandchildren and thus third cousins.

The English 'War of the Roses' is often called the cousins' war to simplify
the complex inter-relationships of the combatants.  For instance, Henry
VI (Lancaster) was usurped by Edward IV (York) his third cousin twice
removed, both being descendants of Edward III.

Consanuinity
The problem of marrying close relatives is an increased likelihood of
genetic defects such as cystic fibrosis.  The exact risk of such
consanguinity has been difficult to quantify, but where the parents are
cousins, the chances of producing an affected children is twice as great as
non-related parents.  Present advances is genetic mapping mean that far
more factors can now be predicted.

Perhaps the area of greatest concern is in societies where cousin marriage has
repeated for many generations.