Things You Will Never Hear a Father Say

Your mother and I are going away for the weekend.  Why don't
you invite a dozen friend around for a party.

You know darling daughter, now that you're fourteen, you'll be ready for
unchaperoned car dates.  Won't that be fun?

In 1913, a happy meal was when a father told funny stories around the
dining table.

The Vocabulary of a Father

Over the centuries fathers have given their children plenty of good
advice; here are some examples which Will and Guy find quite amusing.

COLUMBUS'S
Father: I don't care what you've discovered, Christopher.  You could have written.

MICHELANGELO'S Father: Mike, can't you paint on walls like other children?  Do you have
any idea how hard it is to get that stuff off the ceiling?

NAPOLEON'S
Father: All right, Napoleon. If you aren't hiding your report card inside your jacket, then take your hand out of there and prove it.

GOLDILOCKS'S Father: I've got a bill here for a broken chair from the Bear family.
Do you know anything about this Goldie?

ALBERT EINSTEIN'S Father: But, Albert, it's your senior picture. Can't you do
something about your hair?  Styling gel, mousse, something...?

THOMAS EDISON'S Father: Of course I'm proud that you invented the electric light bulb, Thomas. Now turn off that light and
get to bed!

HUMPTY DUMPTY'S Father: Humpty, If I've told you
once, I've told you a hundred times not to sit on that wall. But would you listen to me? No!

Dermot McCann forgot his lines in a Sunday school play.  Luckily his is
Father
was in the front row especially to prompt him.

He gestured and formed the words silently with her lips, but it did not
help. Dermot's memory was completely blank. Finally, he leaned forward and
whispered the cue, 'I am the light of the world.'

Dermot beamed and with great feeling and a loud clear voice announced, 'My
Father is the light of the world.'

The Stages Of
Fatherhood:
[Will and Guy do not agree with all these
sentiments] 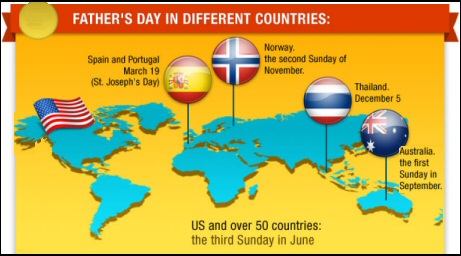 A Father of a Small Boy Says

Question: On which day of the year are the most collect calls*?

Father: A banker provided by nature.

In 1912, Country Life wrote that 'few words come to convey so beautiful a
meaning as that of "Gentleman".'

English gentleman never shows-off.  Any blatant self-promotion would
immediately  disqualify one from being a gentleman.  In this
respect becoming a gentleman is rather like the reverse of Groucho Marx
quote: 'I refuse to join any club that would have me as a member'.

However, down the years English gentlemen have exhibited surprising and
amusing behaviour. I was astonished to read that Edwardian
gentlemen circa 1905 had a penchant for tattoos, I was amused to discover
that a partridge was their favorite motif.  Apparently, these gentlemen
had a shot of cocaine to ease the pain of the tattooist's needle.

Moving forward two decades, I spotted this advice on crocodile shooting
etiquette, 'No compunction need be felt in shooting crocodiles, for where so
common it is a constant worry to the natives'.  As Algeron pointed out
to me, no gentlemen would ever read a books on etiquette, they just absorbed
how to behave by osmosis from
the gentry who came to their stately homes.

Talking of hunting, Oscar Wilde summed up country gentleman galloping
after a fox as:-

"The unspeakable in full pursuit of the uneatable".

What caught my in Mark Hedges recent article published in the times was
this: 'No gentlemen would ever wear pink socks'.  An idea that I
beseech the women in my life to extend to shirts and even cardigans.

Mark Hedges finishes with this wonderful anecdote, which distils the
essence of an English gentleman.  A member of a club in London posted a
notice on the board demanding that the nobleman who stole his umbrella at
once return it.  When a fellow member asked how he knew that the
culprit was a noblemen he replied: "Sir, the rules of this club state that
it is for noblemen and gentlemen. And no gentleman would have taken my
umbrella."

Regarding the use of the apostrophe, our logic is that we
remember one's Father, thus Father's Day.  In British English, as opposed to
American English, it's also possible for a group of people to celebrate their
Fathers' Day.
While this usage of the apostrophe is grammatically correct in England, it's
not in common usage.