Skip to content
'Laughing at our mistakes can lengthen our own life. Laughing at someone else's can shorten it.' Cullen Hightower 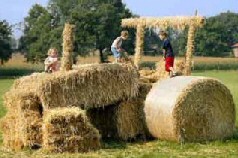 Our mission is to entertain you with clean funny jokes.  We also aim to surprise, but never shock you. Here is our best selection of jokes for August.

How To Grow  Strawberries

Farmer Evans was driving his John Deere tractor along the road with a trailer load of fertilizer.  Tim a little boy of eight was playing in his yard when he saw the farmer and asked, 'What've you got in your trailer?' 'Manure,' Farmer Evans replied. 'What are you going to do with it?' asked Tim. 'Put it on my strawberries,' answered the farmer. Tim replied, 'You ought to come and eat with us, we put ice-cream on our strawberries.'

Robert, who was 6 years old, was looking at the red ripe tomatoes growing in Farmer White's garden.  'I'll give you my two pennies for that tomato,' said Robert pointing to a beautiful, large, ripe fruit hanging on the vine. 'No, I can't do that,' replied Farmer White, 'I can get a dime for a tomato like that one.' So Robert pointed to a smaller green tomato, 'Will you take two pennies for that one?' 'Oh, yes,' answered the farmer, 'I'll give you that one for two cents.' 'OK,' said Robert smiling, sealing the deal by putting the coins in the Farmer White's hand, 'I'll collect it in a week's time.'

Augusts' Loser of the Month

This month's winner of loser of the month has to go to Mr Trevor Doyle who apparently fell asleep on the bus that was returning him to his open prison near Arklow, in the south of Ireland.  He became concerned that the bus would get him to the prison too late and he would miss the deadline for the end of his weekend release.  What did he do - he stole a car to get him back in time reports Jon Henley in the Guardian Diary.

Beware of the Parrot:

A postman in Portchester known as 'Chippenham George' [because of his West Country accent] was working on a new round when he arrived at a garden gate which had a notice that read: 'Beware of the parrot'. He looked into the garden and, sure enough, there was a parrot sitting on its perch. George chuckled to himself at the sign and the parrot there on its perch looking harmless and walked brazenly up the garden path. Halfway to the front door George heard, to his dismay and horror, the parrot shriek, 'Seize him Rover, seize him.'

A police officer in a small town stopped a motorist who was speeding down Main Street. 'But officer, 'the man began, 'I can explain.' 'Quiet!' snapped the officer.' I'm going to let you spend the night in jail until the chief gets back.' 'But, officer, I just wanted to say, ' 'And I said be quiet! you're going to jail!' A few hours later the officer looked in on his prisoner and said, 'Lucky for you, the chief's at his daughter's wedding. he'll be in a good mood when he gets back.' 'Don't count on it, 'answered the guy in the cell.' I'm the groom.'

This is the only time you'll see this phenomenon in your lifetime .... Calendar August 2014. August 2014, will have 5 Fridays, 5 Saturdays and 5 Sundays. This happens only once every 823 years. The Chinese call it 'Silver pockets full'.

Lecture Tour With A Difference

After an evening out, Roger was in no shape to drive, so he sensibly left his car parked and walked home. As he was staggering along, he was stopped by a policeman. 'What are you doing out here at three o'clock in the morning?' asked the police officer. 'I'm on my way to a lecture,' answered Roger. 'And who on earth, in their right mind, is going to give a lecture at this time of night?' enquired the constable sarcastically. 'My wife,' slurred Roger grimly.

The teacher asked her class of 8 year olds to use a sentence containing the word fascinate Molly put up her hand and said, 'My family went to my granddad's farm, and we all saw his pet sheep.  It was fascinating.' The teacher said, 'That was good, but I wanted you to use the word 'fascinate', not fascinating'. Sally raised her hand. She said, 'My family went to see Rock City and was fascinated.' The teacher said, 'Well, that was good Sally, but I wanted you to use the word 'fascinate.' Little Johnny raised his hand. The teacher hesitated because she had been burned by Little Johnny before. She finally decided there was no way he could damage the word 'fascinate', so she called on him.  Johnny said, 'My aunt Gina has a sweater with ten buttons, but her bosoms are so big she can only fasten eight.' The teacher sat down and cried.

A bus load of tourists arrives at Runnymede. They gather around the guide who says, 'This is the spot where the barons forced King John to sign the Magna Carta.' A fellow at the front of the crowd asks, 'When did that happen?' '1215', answers the guide. The man looks at his watch and says, 'Gee whiz' - Just missed it by a half hour

A great grandmother was ticked off by her local council over noise from birdsong in her garden. The official note from environmental health warned of 'a complaint alleging nuisance caused by birds singing.' Dorothy Berry, 65, of Fulham, West London, said, 'When I saw the letter I thought someone was larking about. I have a lovely garden in which the blackbirds sing in the trees and on the aerial of the house. But I really don't see what we can do about that.' The letter to Dorothy claimed the problem was caused by birdsong 'arising from your premises during the early hours'. It continued, 'In the interests of preventing any possible disturbance to nearby residents you may wish to consider if any such noise is likely to cause offence.' Dorothy has not kept birds inside her home since her beloved pet cockatiel died last year. A spokesman (Jobsworth) for Hammersmith and Fulham Council said, 'We are aware that this matter has ruffled a few feathers, but we must investigate all complaints from residents however bizarre they may appear.'

One secret of Bagpuss's success is the gentle way that he orchestrates the other characters.  At the start of the programme you can literally see Bagpuss think - thought bubbles come out of his head.

The History of Bagpuss the Cat

Peter Firman and Oliver Postgate created the Bagpuss series for BBC Television.  Amazingly, such is the popularity that the series has been repeated at least 25 times since that first run in 1974.  One secret of achieving immortality is to die young and on this score, Bagpuss terminated after just these 13 episodes.  As you just read these titles, I am sure that your mind can invent a story for each one - that is the essence of Bagpuss, and why it appeals to successive generations of children