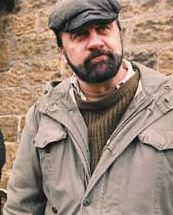 Yorkshire people are a very particular breed: they can be dour, they speak their minds and they are hard working, friendly and kind. Yorkshire people refer to their county as 'God's own county,' and indeed can boast some of the most beautiful countryside in Britain.

Will and Guy have attempted to give you a taste of Yorkshire humour through the following jokes:

Bob: What's the difference between unlawful and illegal Arnold?

Bob: Ayup, lad. You know this is actually supposed to be comedy now. Your answer was supposed to be, 'I don't know Bob, what is the difference between unlawful and illegal?' You're rubbish at this, you want to stick to carpentry, mate.

Arnold: Well you see I'm a very intelligent person and I'm thinking of the intellectual response to that question not the umm, comical one. OK, I'll give you the comical response now.

Bob: Unlawful is against the law, and illegal is a sick bird. 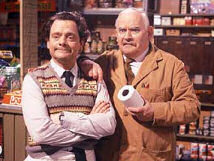 'Open All Hours' is a British television production in which Ronnie Barker and David Jason play typical Yorkshire folk. The realistic 'Northern' character of the humour and characters is suggested as a reason for
the success of the programme.

A Yorkshire man had emigrated to America, but still used to receive news from home by mail.

One day, he got the following telegram:  'Regret father died this morning STOP Early hours. Funeral Wednesday STOP
Yorkshire two hundred and one for six STOP Boycott not out ninety six.'

Four old retired guys are walking down a street in London. They turn a corner and see a sign that says, "Old Timers Bar - ALL drinks 10p." They look at each other and then go in, thinking, this is too good to be true.

Graeme, the old bartender says in a voice that carries across the room, 'Come on in and let me pour one for you!  What'll it be, gentlemen?'

There's a fully stocked bar, so each of the men orders a martini. In no time the bartender serves up four iced martinis-shaken, not stirred-and says, 'That'll be 10p each, please.'

The four guys stare at the bartender for a moment, then at each other. They can't believe their good luck. They pay the 40p, finish their martinis, and order another round.

Again, four excellent martinis are produced, with the bartender again saying, 'That's 40p, please.'  They pay the 40p, but their curiosity
gets the better of them. They've each had two martinis and haven't even spent a £1 yet. Finally one of them says, 'How can you afford to serve martinis as good as these for a 10p a piece?'

'I'm a retired tailor,' the bartender says, 'and I always wanted to own a bar. Last year I hit the Lottery Jackpot for £25 million and decided to open this place. Every drink costs 10p. wine, liquor, beer-it's all the same.'

As the four of them sip at their martinis, they can't help noticing seven other people at the end of the bar who don't have any drinks in front of them and haven't ordered anything the whole time they've been there.

Nodding at the seven at the end of the bar, one of the men asks the bartender, 'What's with them?'

The bartender says, 'They're retired people from Yorkshire. They're waiting for Happy Hour when drinks are half-price.'

Will and Guy recommend you read these out aloud

Duke of Wellington - by Stanley Holloway

The following poem is, in fact, a traditional folk song which was written in 1929 and made famous by the actor Stanley Holloway [1890-1982]  It is about the period before the Duke of Wellington's famous battle at Waterloo against Napoleon in 1815.

If you are able, it is probably best read in a northern accent:

It occurred on the evening before Waterloo,
As troops were lined up on parade.
And sergeant inspecting 'em, he were a terror,
Of whom every man were afraid.

All excepting one man, he were in't front rank,
A man by t'name of Sam Small.
And he and t'sergeant were both daggers drawn,
They thought nowt of each other at all.

As sergeant walked past he was swinging his arms,
And he happened to brush against Sam.
And knocking t'musket clean out of 'is hand,
It fell t'ground wi' a slam.

'Pick it up!' said sergeant, abrupt like, but cool.
But Sam wi' a shake of 'is 'ead.
Said 'Seeing as tha knocked it out of my hand,
P'rhaps tha'll pick t' thing up instead.

Sam, Sam, pick up tha musket!
The sergeant exclaimed with a roar.
Sam said tha' knocked it down reasonin'
Tha'll pick it up, or it stays, where t'is on the floor.

The sound of high words very soon reached
The ears of an officer, Lieutenant Bird.
Who says to the sergeant 'Now what's all this 'ere?',
And the sergeant told what had occurred.

'Sam, Sam, pick up thy musket !',
Lieutenant exclaimed with some heat.
Sam says he knocked it down, reasonin he picks it up,
Or it stays where't is at my feet.

It caused quite a stir when the Captain arrived,
To find out the cause of the trouble,
And every man there all, excepting old Sam,
Was full of excitement and bubble.

'Sam, Sam, pick up thy musket!',
Said Captain, for strictness renowned.
Sam says he knocked it down, reasonin he picks it up,
Or it stays where't is on the ground.

The same thing occurred when the Major and Colonel
Both tried to get Sam to see sense.
But when old Duke of Wellington came into view,
Well then the excitement was tense.

Up rode the Duke on a lovely white horse
To 'Find out the cause of the bother.'
He looked at the musket, and then at old Sam,
And he talked to old Sam like a brother.

Footnote: If you can provide some examples of Yorkshire please feel free to contact us.